During the 1980's, Citadel made some of the best monsters that have been rendered in lead. The reason for their success is simple: they were sculpted to emphasize personality and character. A harpy isn't just a harpy -- it's a harpy that looks like Ronald Reagan. A dragon isn't just a dragon -- it's a potbellied drake with a pocket watch, half lizard and half merchant banker. And a giant isn't just a giant -- it's a knuckle-dragging Scots cyclops. 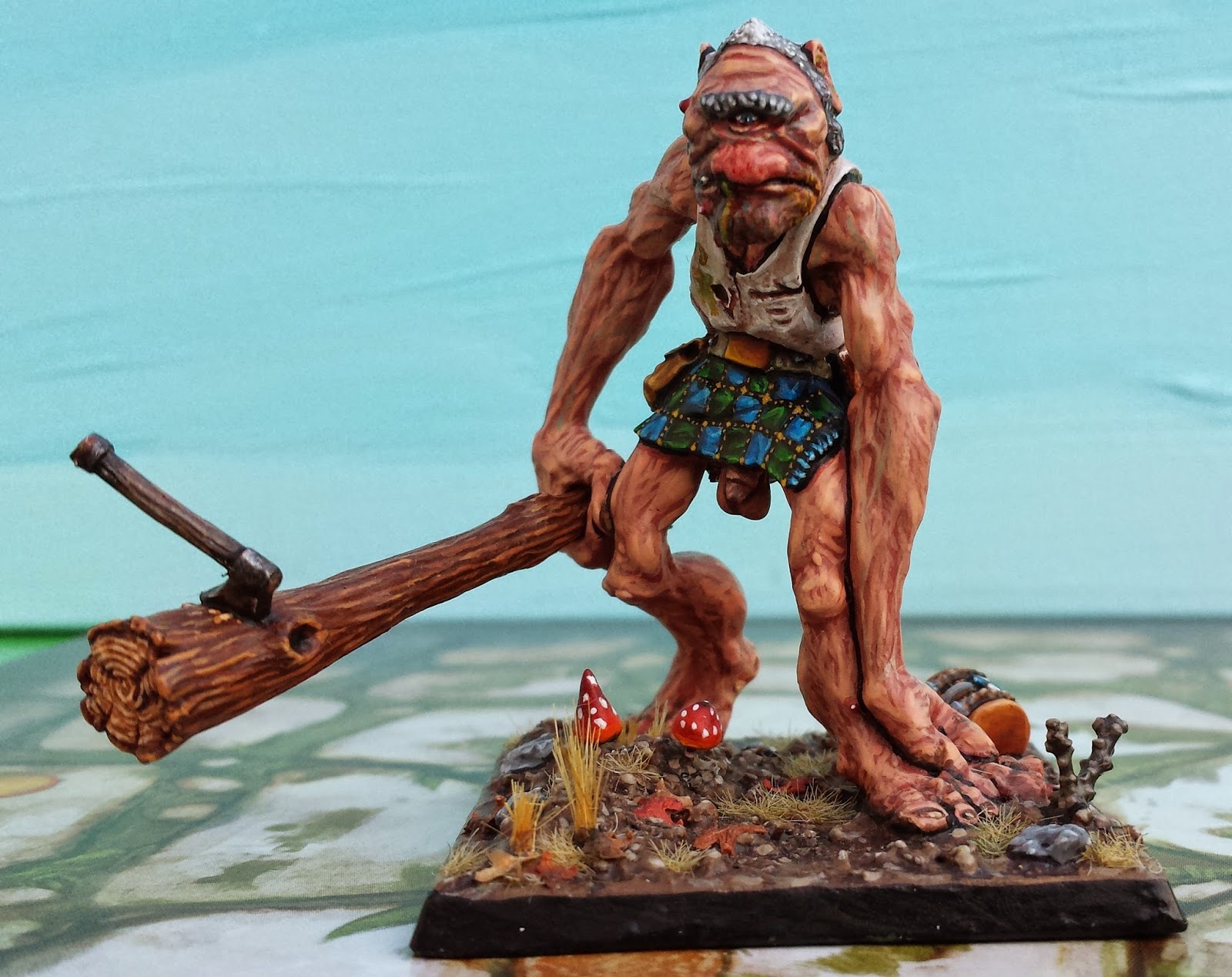 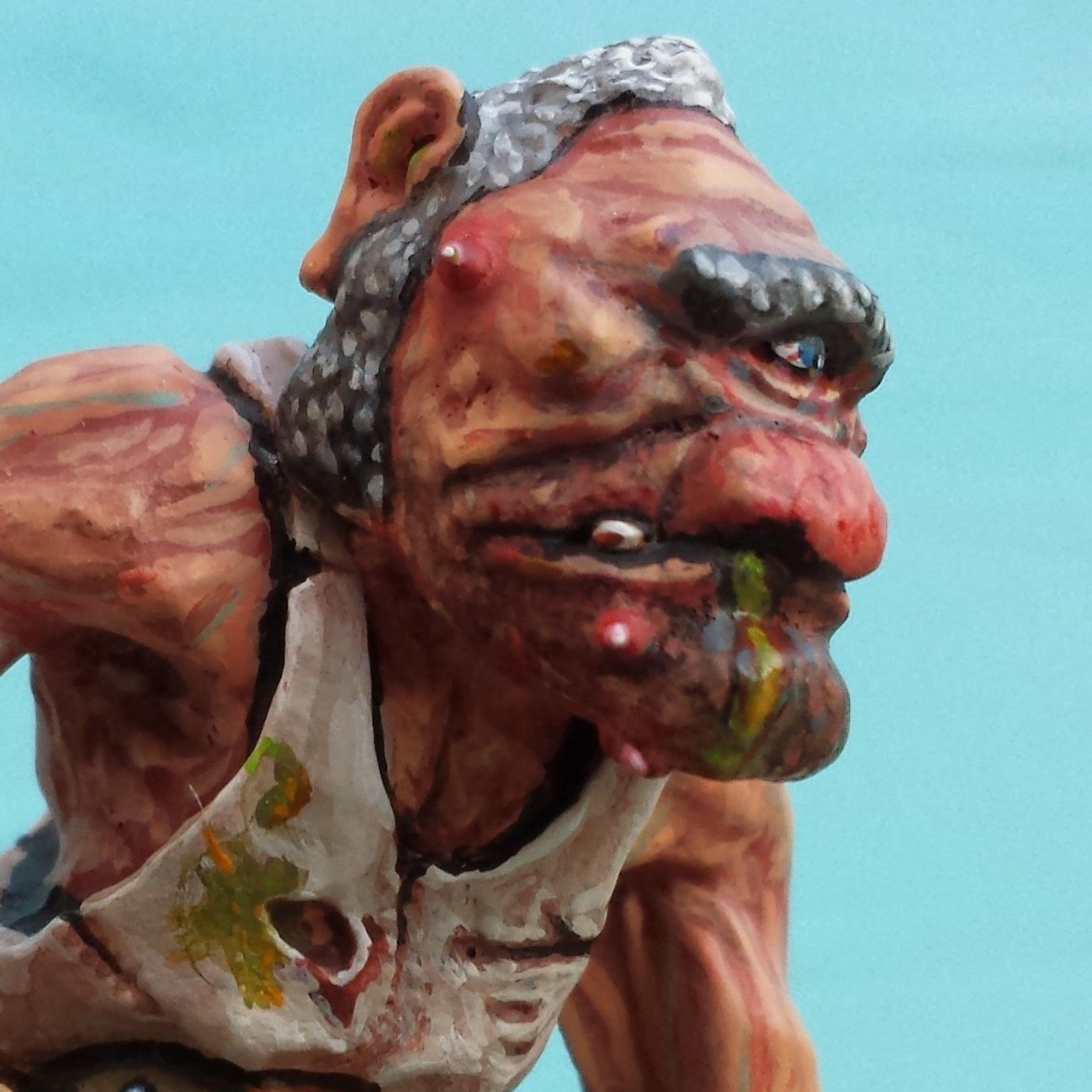 The Citadel giant (1987) was a lot of fun to paint. I wanted to make him seem old and unhygenic, but also robust, a little like Boris Yeltsin in his sunset years. I tried to achieve this sozzled effect by covering his pink skin with veins, wrinkles and liver spots. To underline his struggles with the bottle, I gave him a bloodshot eye and a nose ravaged by rosacea. I also added a cask of brandy to his belt and another discarded on the ground. The nearby toadstools are greenstuff and wire -- the dead bush is a painted twig from a smokebush tree. 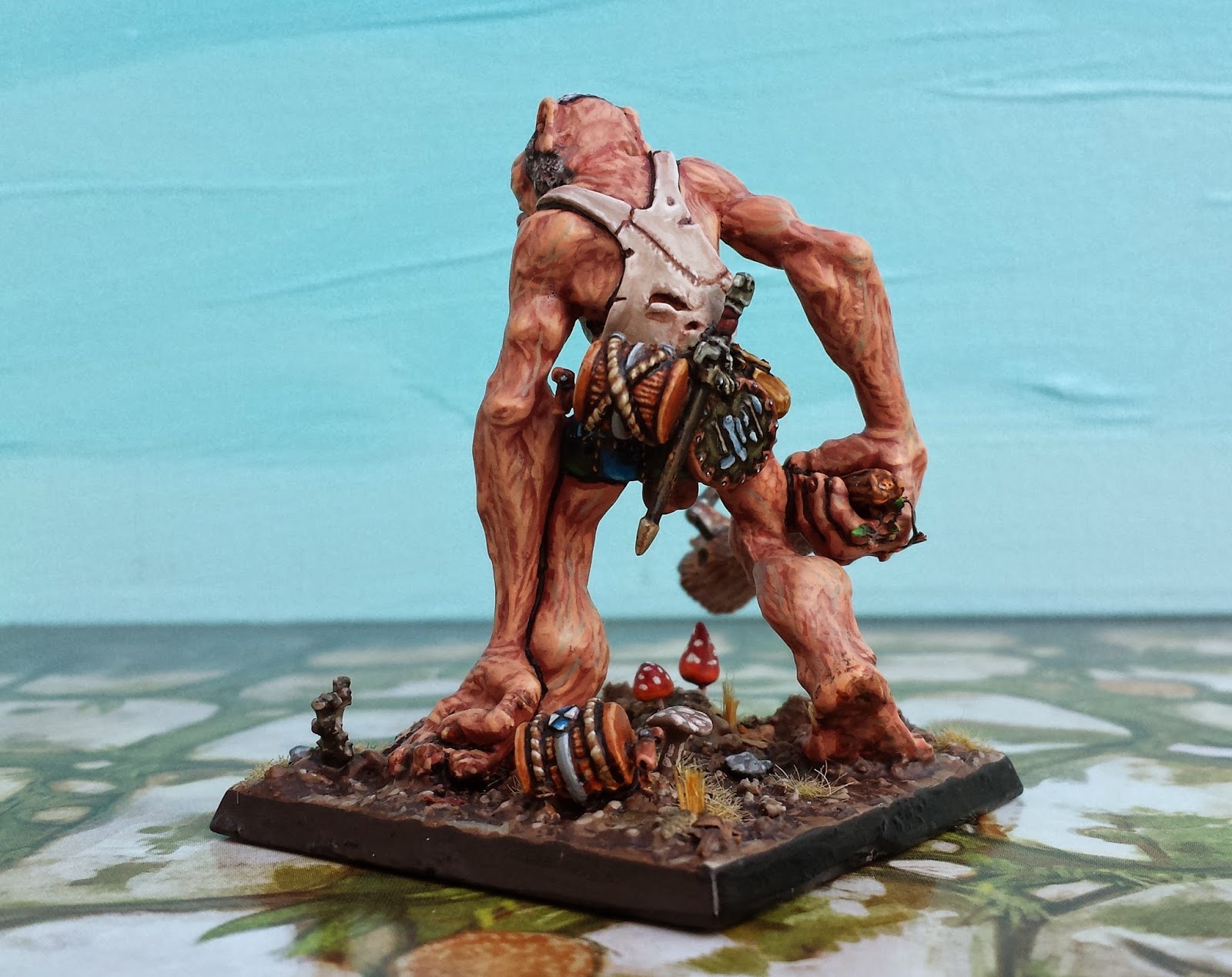 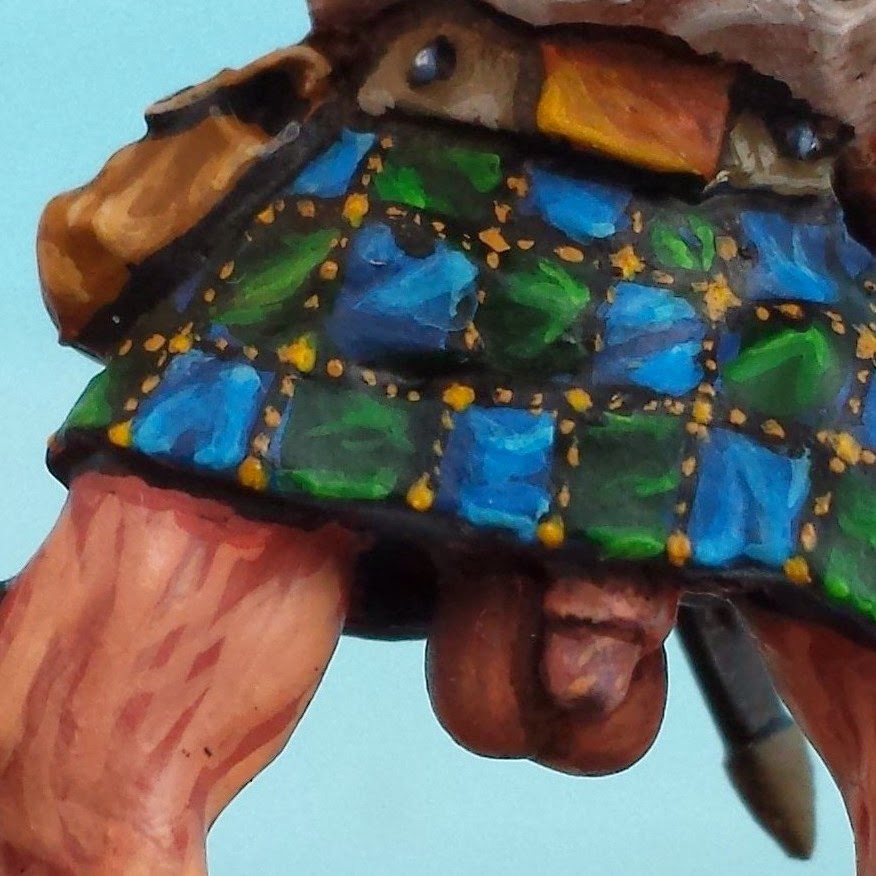 There was one thing that troubled me about this miniature: he was wearing a short kilt, but there was nothing underneath it. This seemed a rare oversight on the part of sculptor Nick Bibby and a slander to Scotsmen everywhere.  And so to remedy this anatomical omission, I fashioned a little set of tackle out of greenstuff, and carefully pared it back with my modelling knife. The key was to achieve a sense that even though time has made this fellow sag, he is still proud of the family tartan.

The Blue Dragon (1987) is another beauty of a miniature. I love the fact that it isn't slithering or rearing or launching into the old claw/claw/bite routine. Rather, this dragon is merely squatting and looking at the viewer through narrow, crafty eyes. The raised claws suggest that perhaps it is getting ready to cast a spell (a truly unusual pose for a dragon). But I prefer to think that this dragon just likes to talk. "Hmmm," he seems to be saying, "You seem to be a smart sort of fellow. I've a real estate opportunity in Florida for your ears only." 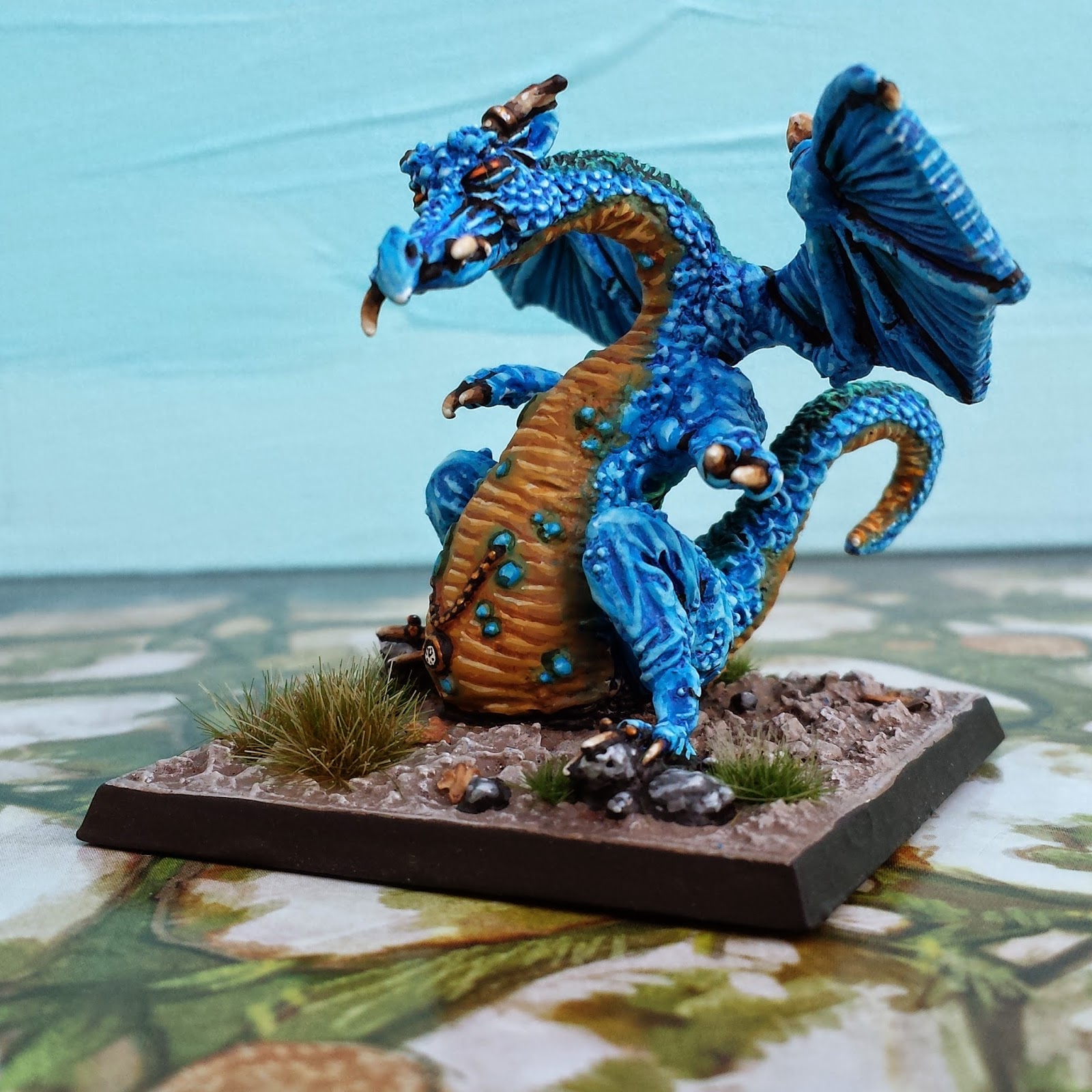 "Coffee's for closers only." 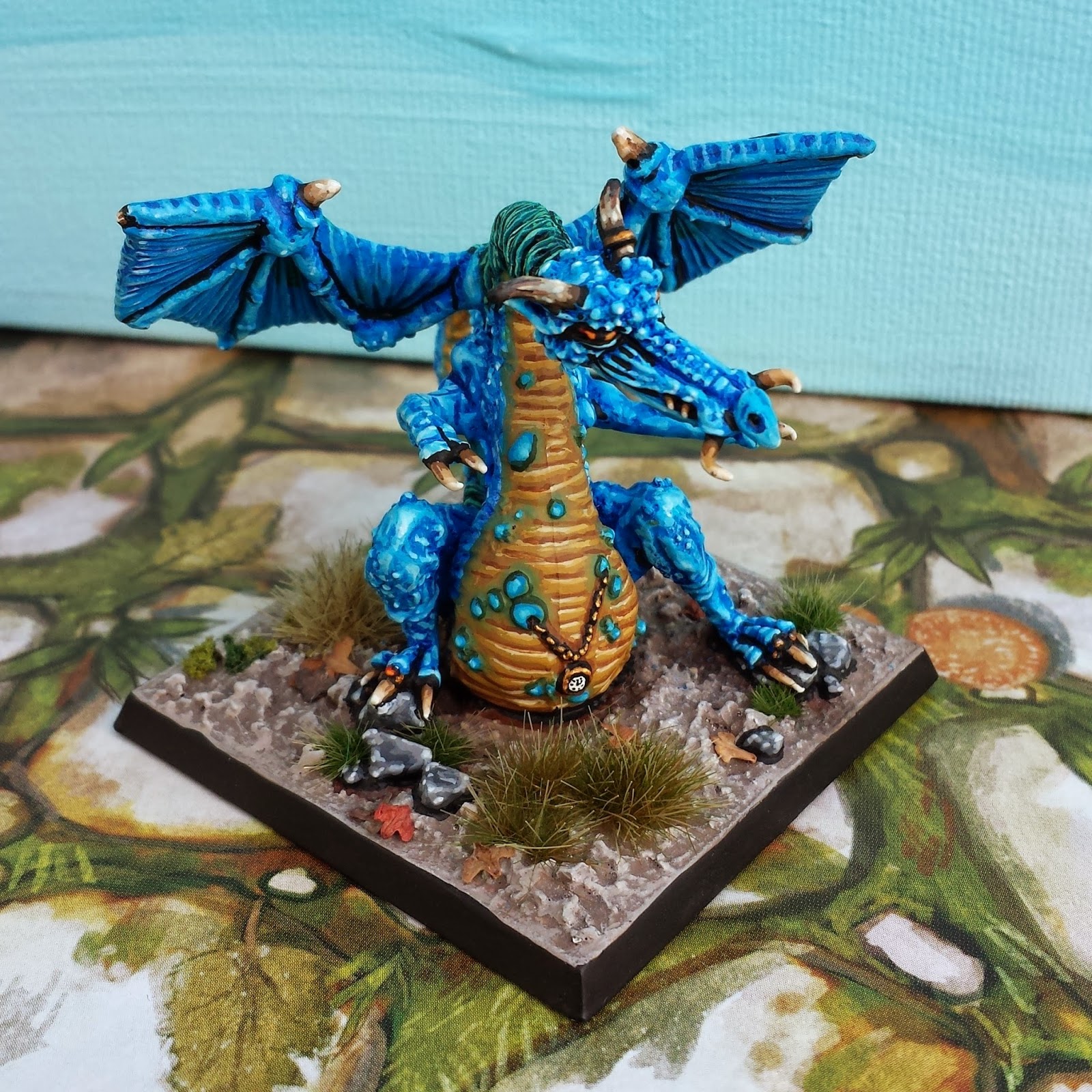 I love Jes Goodwin's Manticore (1987) because his face bears a striking resemblance to Dee Snider from Twisted Sister. In order to do justice to this magnificent sculpture, I tried to make him look as much like a hair-metal lead man as possible.  To emphasize his grimace, muscles and feathered hair, I used a very aggressive highlighting technique. 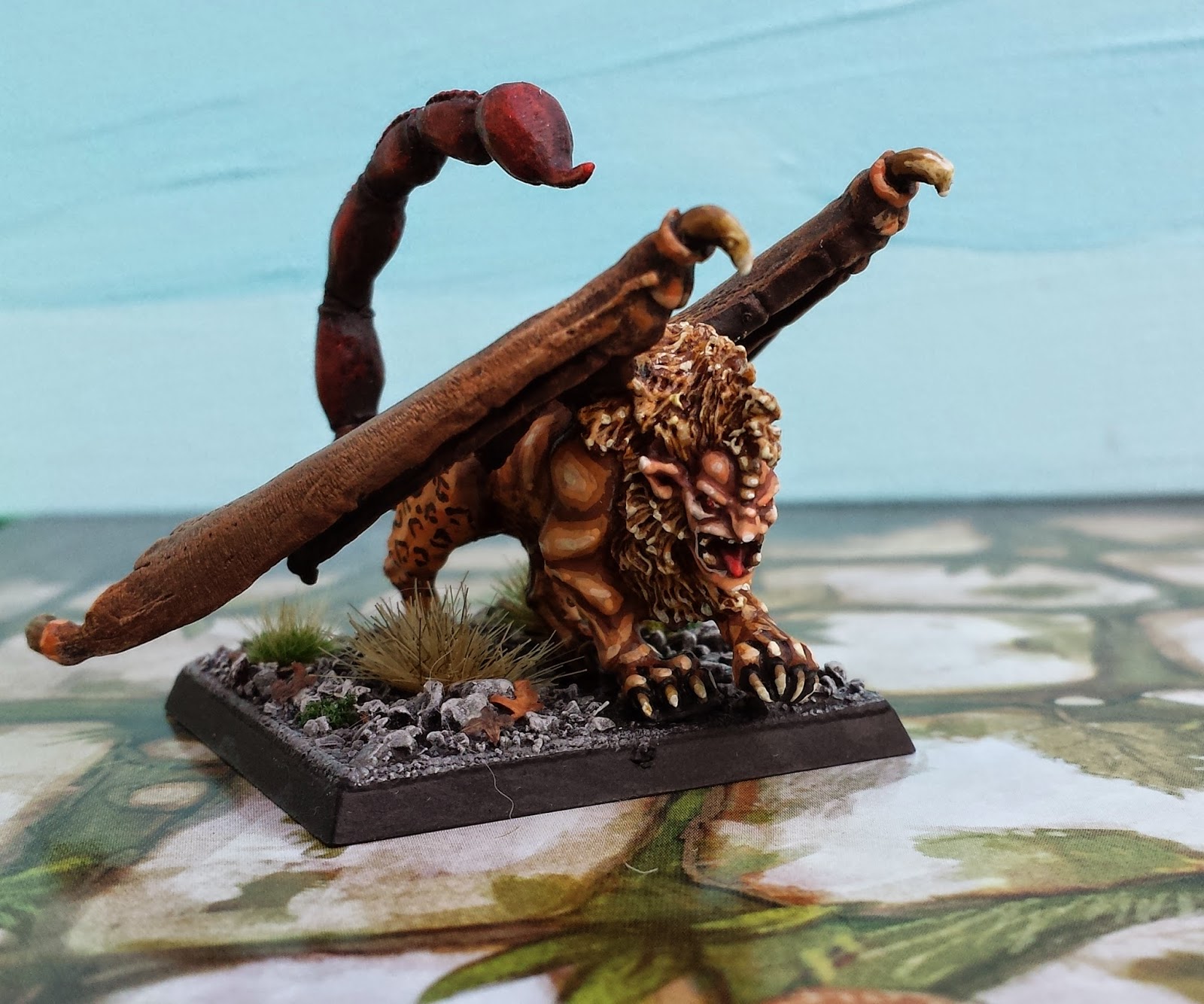 The wings and tail of the manticore display the pleasing effect that can be achieved simply by dry-brushing a carefully sculpted metal miniature. But something is missing... No glam rocker is complete without a spattering of leopard print, so I decided to make this particular manticore a lion in the front and leopard in the back. The leopard pattern isn't difficult to achieve: start with a base of tan brown, highlighted up to a desert yellow. Add some splotches of orange which are are then (very) roughly bordered by dots and curves of medium-dark brown paint. Now he's ready for the Hammersmith Apollo! 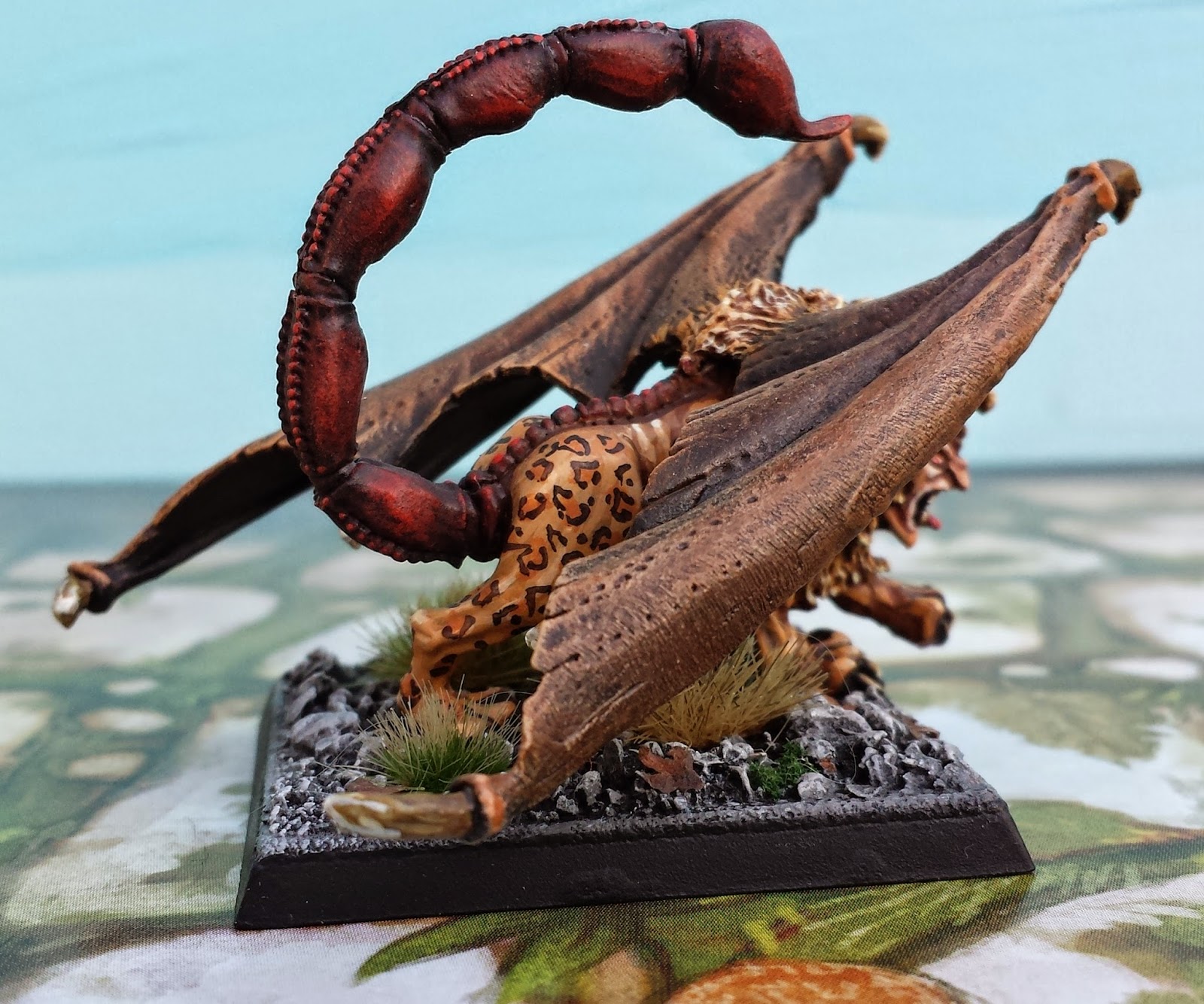 "We're not going to take it anymore!"
Posted by matthewjksullivan at 11:56 AM