Since I started painting the Star Wars Miniatures from Imperial Assault, I've tried to adjust my painting style. My normal approach involves lots of rust effects, stains, and acne... something that fits in well with the earthy and run-down atmosphere of Warhammer. But my image of Star Wars is not like that at all. There is nothing run-down about Star Wars. 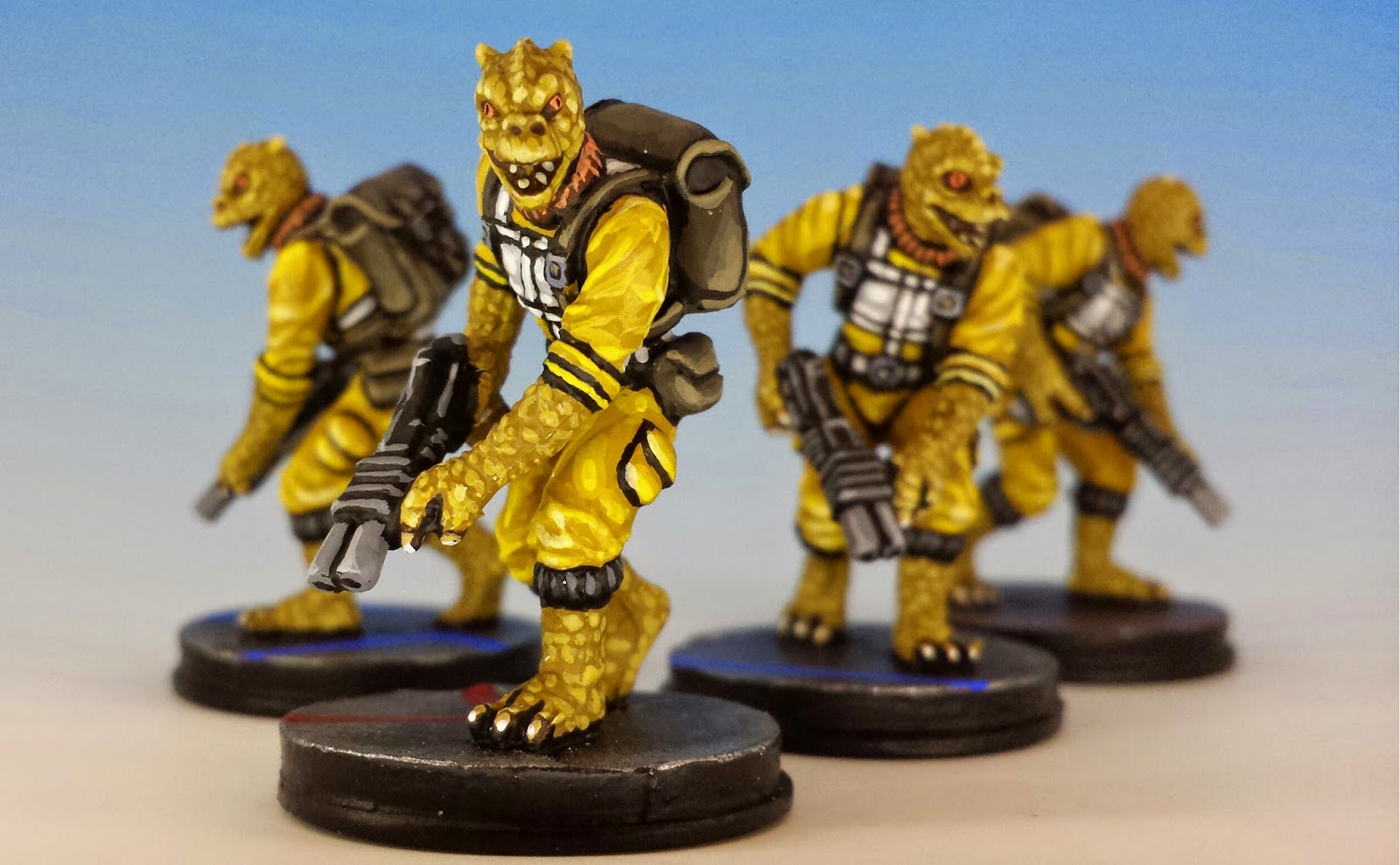 The armour of the Storm Troopers gleams like a mirror. Uniforms are crisp. Interiors are bright and clinical. Although there are exceptions (Tatooine, Degobah), the Star Wars universe is generally neat and well vacuumed. (More modern Star Wars art, including the illustrations in Imperial Assault itself, often go for a grittier and more distressed feeling. I think this grimdark aesthetic is overplayed. My Storm Troopers spit-polish their armour in case the Emperor comes for a visit.) 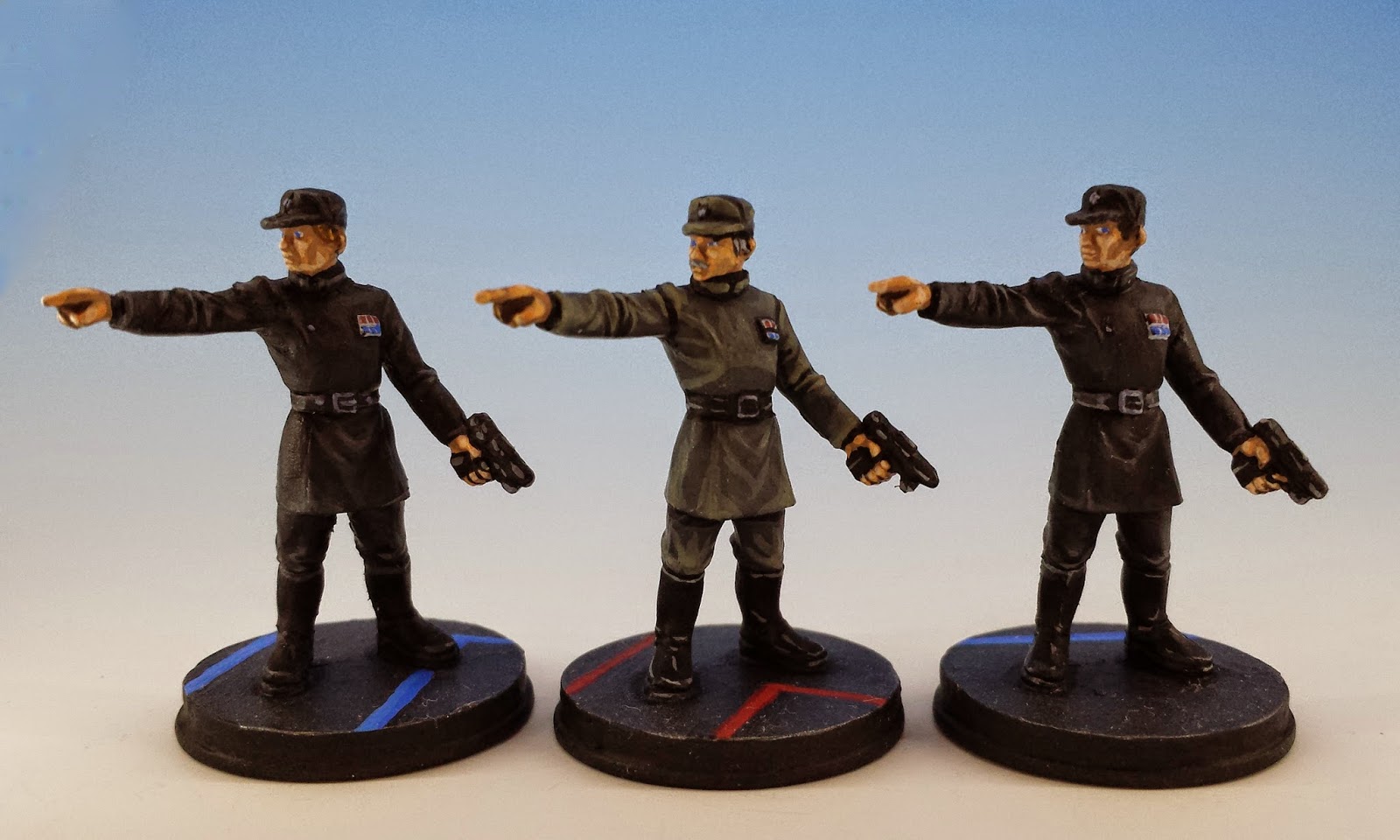 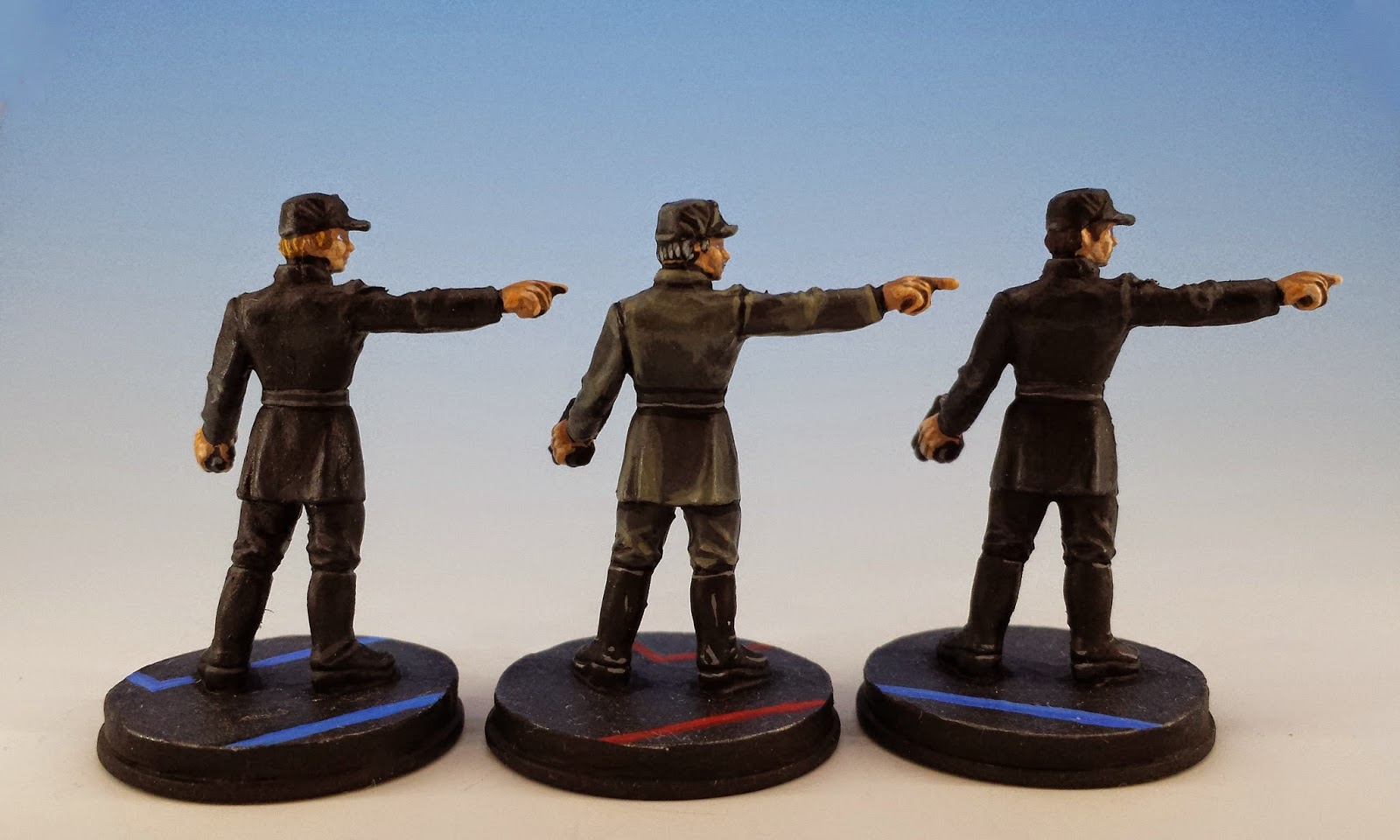 So I've tried to make my paint jobs clean and crisp: simple colours, bleached whites, no dirt. In order to capture the highly polished surfaces, I've largely abandoned metallic paints (which have a limited dynamic range). Instead I'm using whites and light greys to mimic light effects. (This approach is probably best seen in the figure of Darth Vader below.) A superb example of this  simplistic style of miniature painting is a Jedi diorama painted by Florian Tuffskull - his work nails the monochromatic (but dramatic) feel of Star Wars. 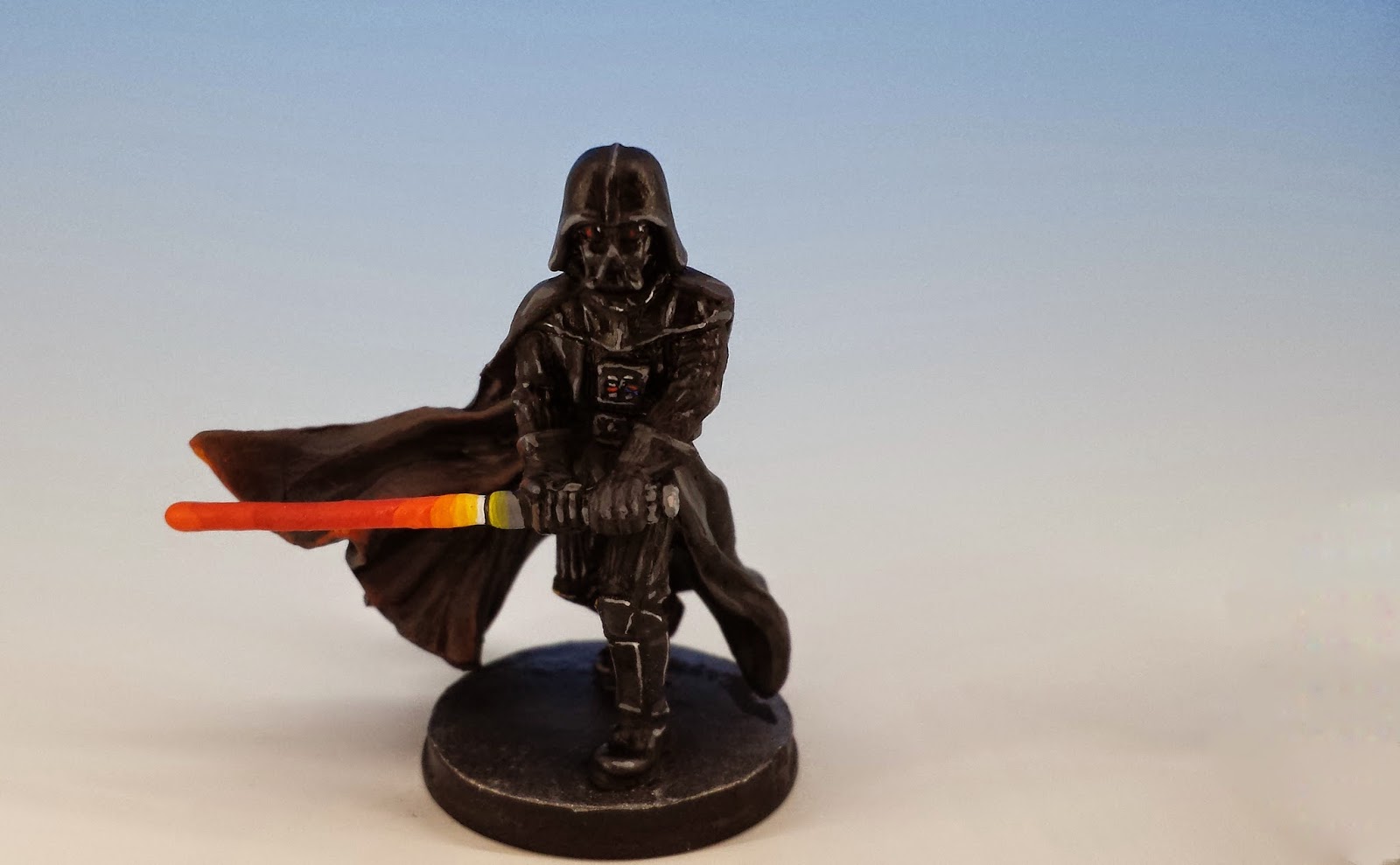 I thought long and hard about how to base these miniatures. Like most hobbyists, my natural inclination is for a lush base. But the action in Imperial Assault mainly occurs inside spacecraft, military bases and bunkers. I decided to hold fast to the clinical aesthetic of Star Wars and use a simple, polished metal floor (in fact, the bases are the only metallic paints in these miniatures). In order to add a little interest and to help distinguish between different squads of miniatures, I painted simple traffic stripes on the bases in blue and red.

Another unique characteristic of Star Wars are the uniformly black mat guns. I find them quite menacing in the movies, and they create a great contrast with the white Storm Trooper armour. But they pose a challenge for the painter, since flat black can be quite boring. My approach has been to carefully highlight the weapons with gray - just enough so that the eye can pick up detail without losing the feeling of lethal gravity. 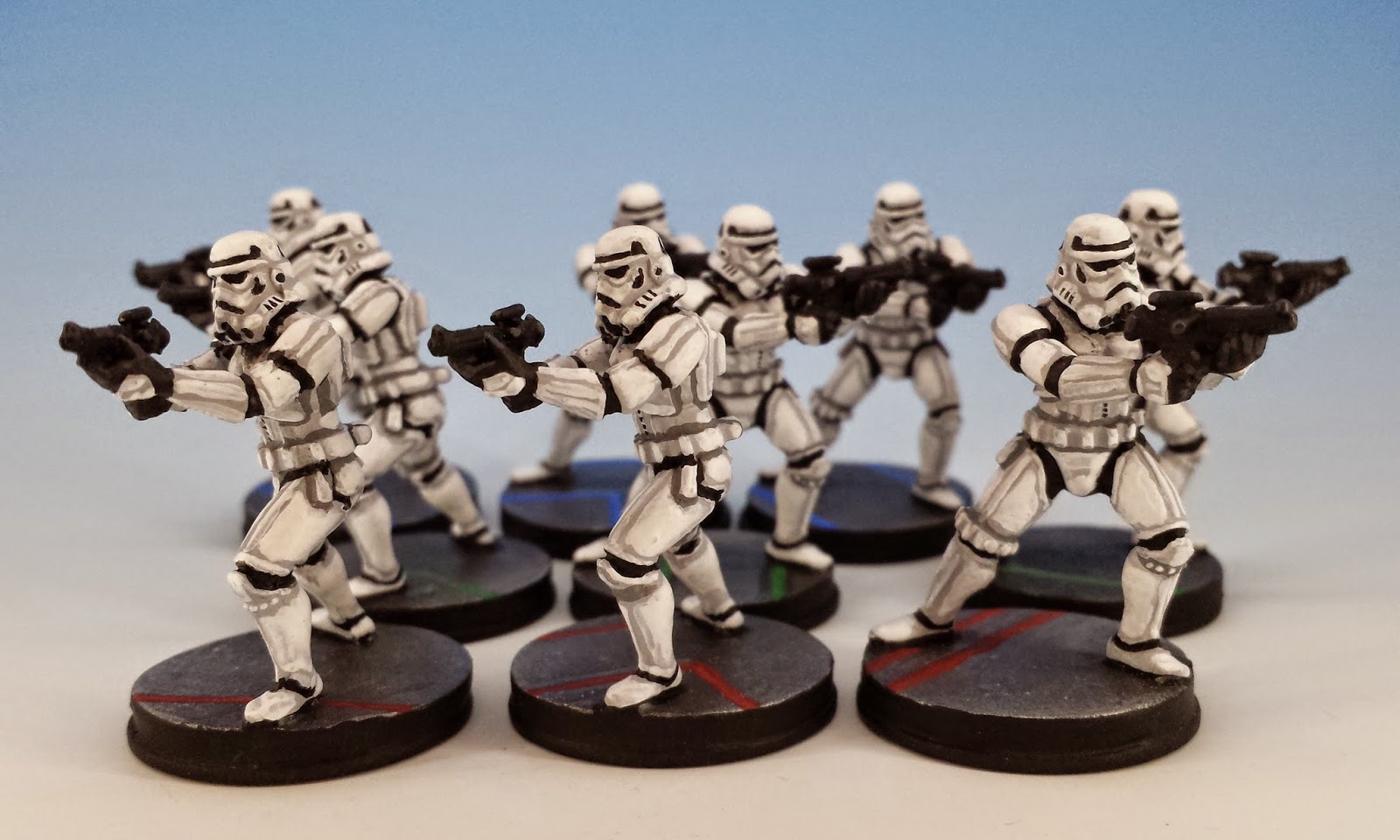 I've received some inquiries here and on Boardgame Geek about other painting techniques I've used, specifically about the Emperor's Guard. For the record, I didn't use any blending techniques or oil paints. The red robes in these minis is simply the product of 6 or 7 graduated layers of Vallejo Game Colours. I primed the miniatures in white, and then slathered on a couple base-coats of Extraopaque Heavy Red mixed with a little black (approx. 4:1). I layered up with pure Heavy Red, and then increasingly bright mixes of Heavy Red and Gory Red, until I'm using pure Gory Red. Whenever painting red, the key is to avoid allowing it to become too orange in the final layers - so I didn't use a bright orange as the last highlight. Rather I applied thin lines of Parasite Brown (a warm brown) on the tips of the creases. I didn't employ any washes, although I did apply a few strokes of pure black in the deepest crevasses of the cloaks, to add a sense of drama.

The helmets follow approximately the same technique, although I used a slightly different palette of red paints (Scarlett Red to Bloody Red) since I wanted to suggest (however subtly) that the helms are made of a different material than the robes. As the final highlight, I applied a few lines of light grey and white to show reflecting light. I hope this is helpful! Next week I'll discuss using oil paints on the Imperial AT-ST Walker. 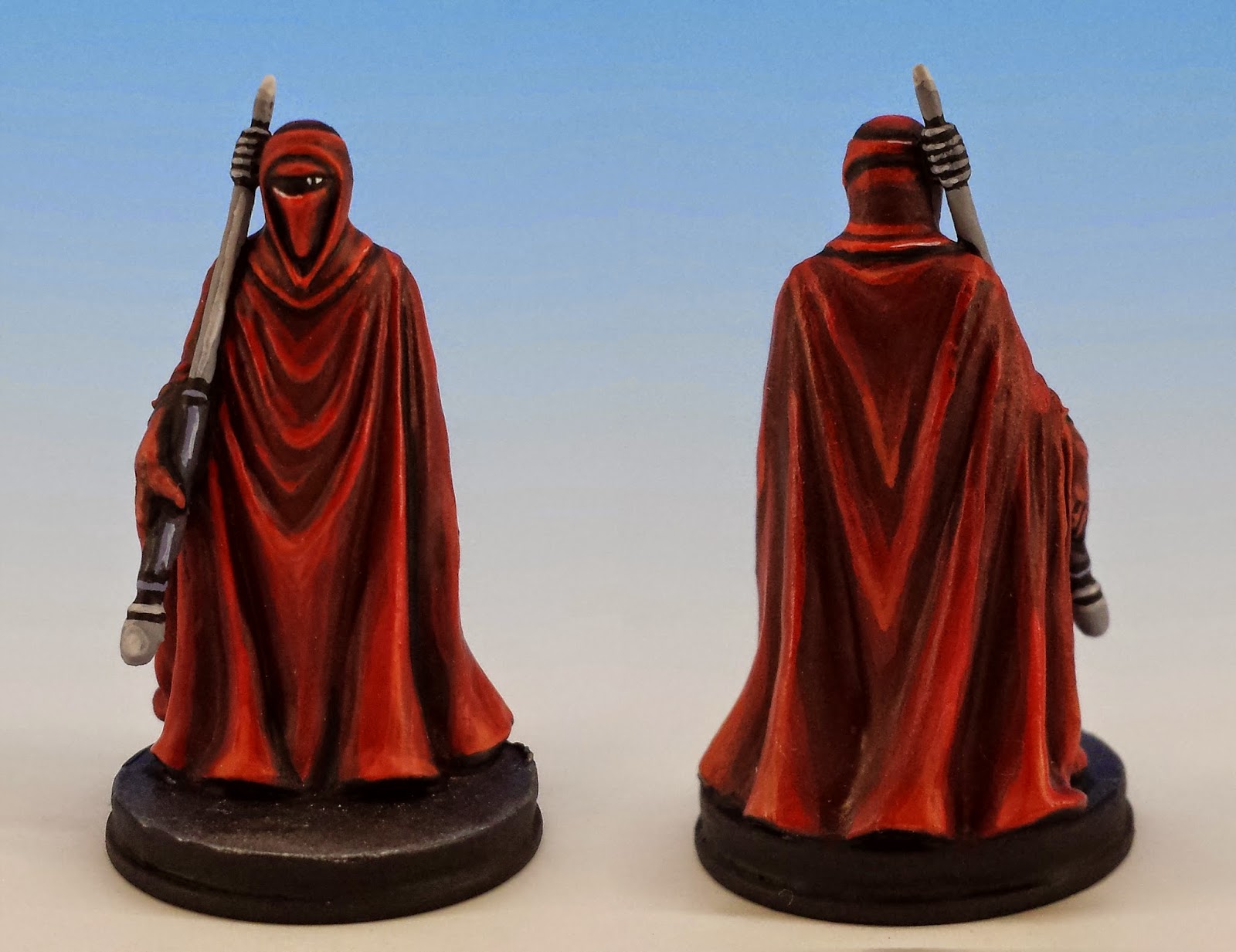 Posted by matthewjksullivan at 9:05 PM 8 comments:

The Star Wars miniatures of Imperial Assault: a review 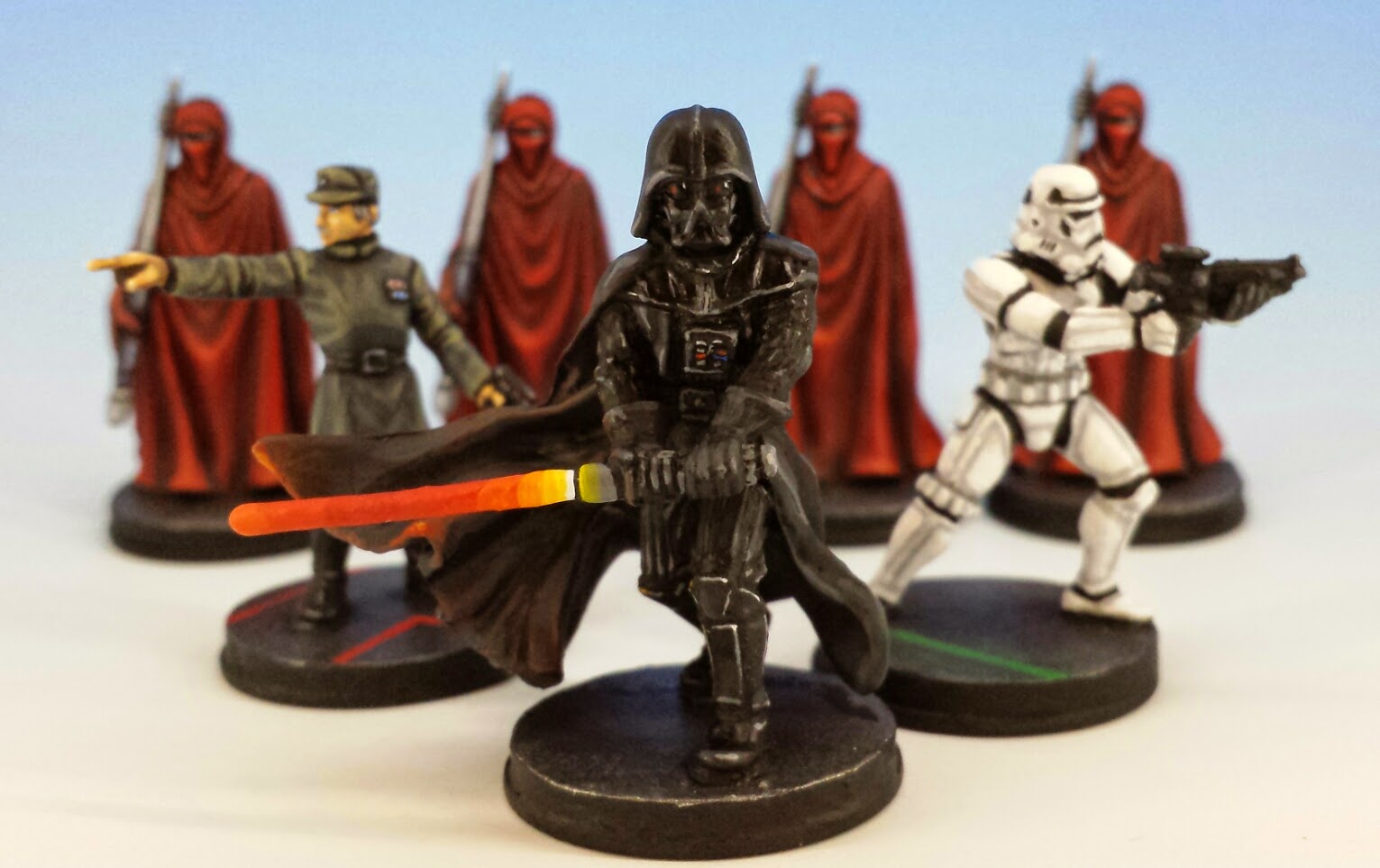 When I heard that Fantasy Flight Games was releasing Imperial Assault, a Star Wars miniature combat game, I became so excited that I darkened my trousers with a rich, fragrant urine. It was a dream come true (the game, not the urine). Star Wars has been long neglected in the world of miniature gaming (previous attempts include the underwhelming sculptures in Star Wars Miniatures Battles by West End Games, or the juvenile monstrosities of Star Wars Miniatures by Wizards of the Coast.)

I purchased Imperial Assault as soon as it hit the shelves in December 2014, and have been furiously painting up the miniatures ever since. After 2 months of work, I've painted 33 of the 36 miniatures in the box. 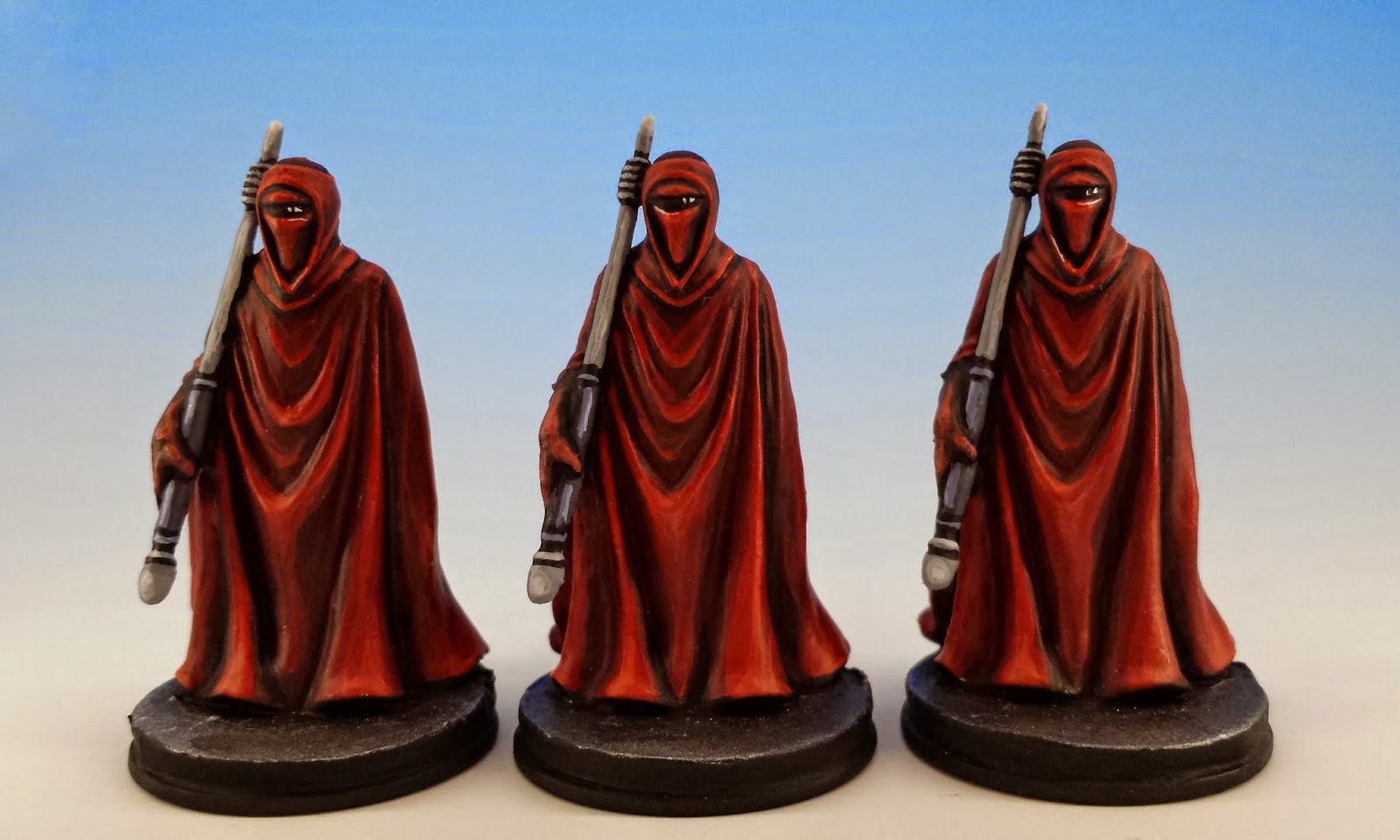 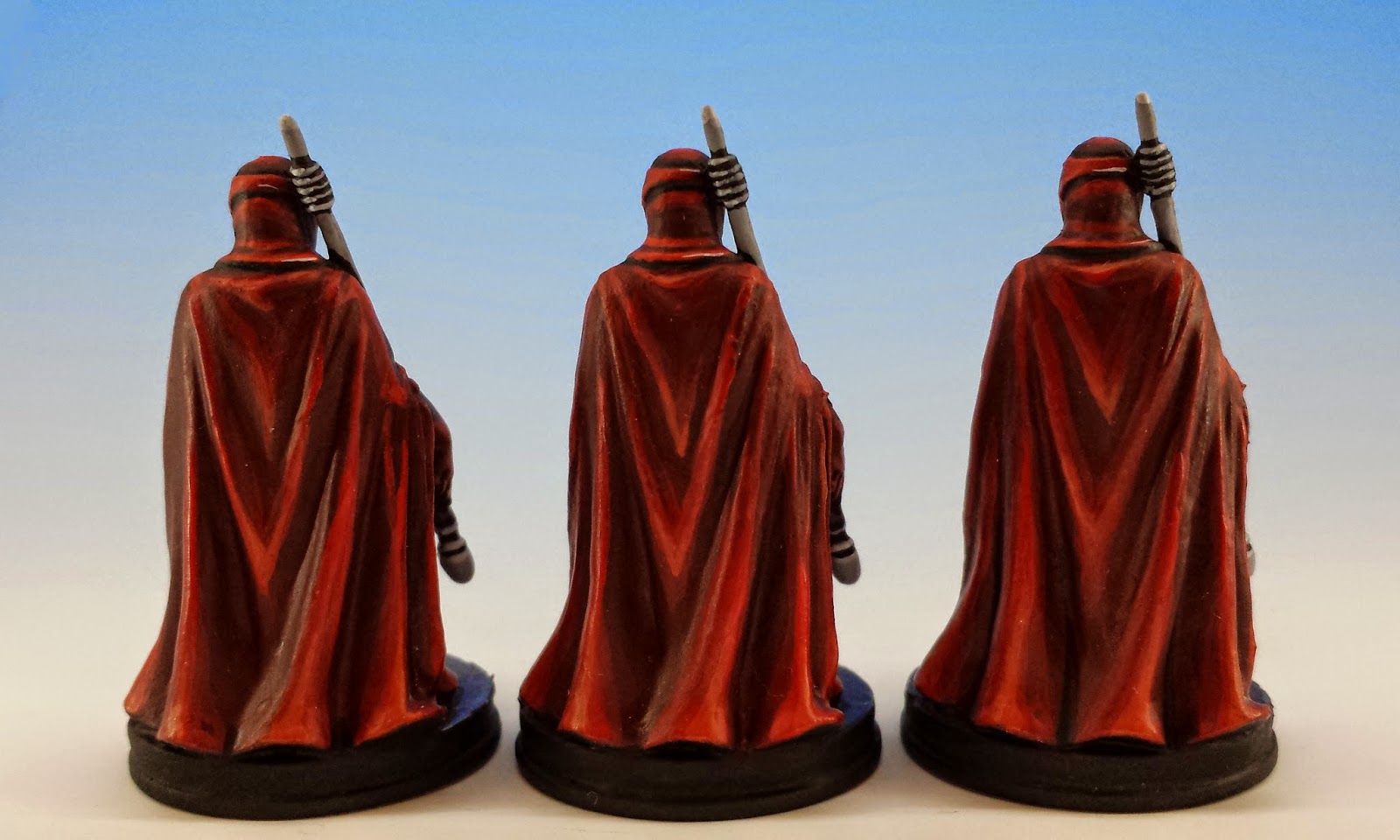 The miniatures in Imperial Assault are well worth the effort. They are sculpted by Benjamin Maillet with Jason Beaudoin, Gordon Robb and Nick Miller. Maillet and his team have gone for a lifelike look with realistically proportioned limbs. In this sense, they remind me of the Lord of the Rings figures sculpted by the Perry Brothers for Games Workshop -- a style of miniature very different from the "heroic" style common to Warhammer.

From foot to eye, the Star Wars minis average about 32 mm, although some figures (Wookies, Darth Vader) are much bigger. This variation in height is satisfying, giving some models a feeling of strength. Maillet's particular talent is capturing the personality of the characters in dynamic poses... so young Luke Skywalker seems almost afraid of his over-sized blaster, while Darth Vader's forward step lends him menace and power.

My only complaint is that the miniatures are made of medium-hard plastic (urethane?), rather than the rigid polystyrene used by Games Workshop. This is a pity: the softer plastic can lose some detail, especially in the faces. It also leaves a serious modeler with some problems: the molding lines on the miniatures can be quite pronounced, and require care to remove, since sanding this material doesn't work (files shred the plastic into a rough fringe rather than a smooth surface). 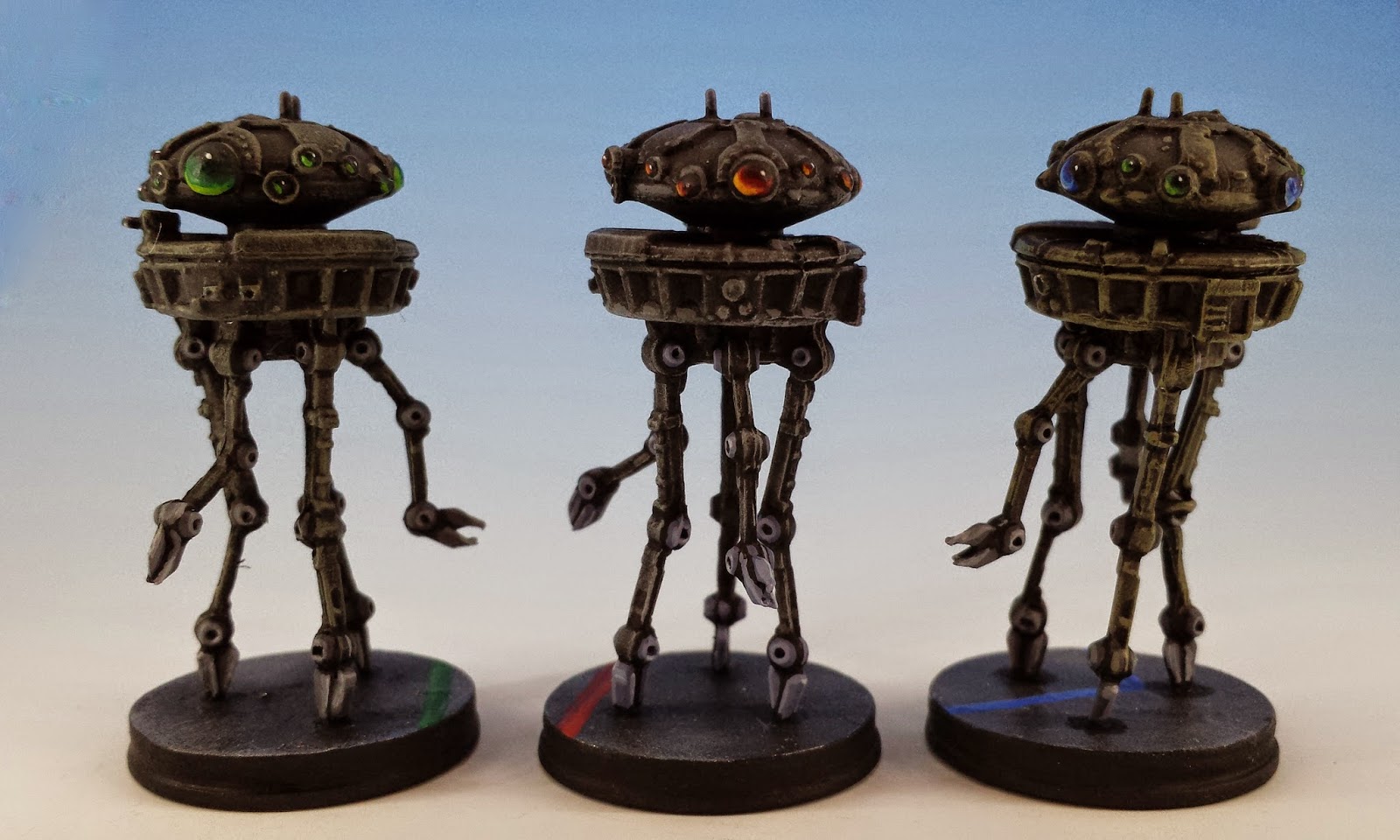 Also, thinner pieces of the miniature (like lightsabers) are very bendy -- to harden these bits and keep the paint from cracking off them over time, I covered them in layers of white glue and water (50:50 mix). Finally, because the plastic is quite light, I had to improve the figures' stability. So I glued 1/4 x 1" stainless steel washers to the bottom of each plastic base. Happily, these washers are almost a perfect fit with the miniatures' built in round base. 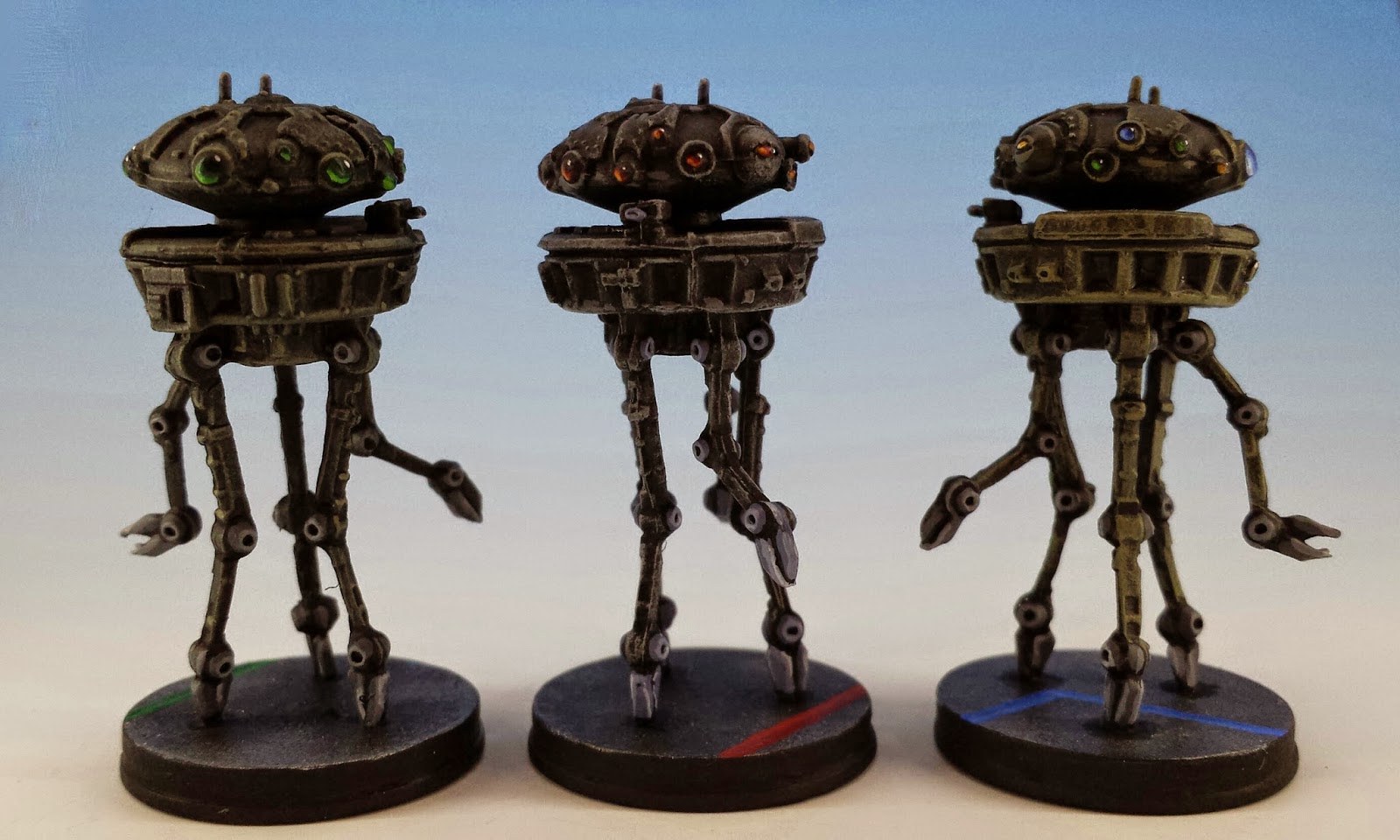 If these figures were just board game pieces, I could forgive the cheap plastic. But Fantasy Flight is contractually obligated to make Imperial Assault a miniature war game since they don't have the rights to Star Wars board games. Indeed, there is a rumour (picked up from my local gaming store) that Hasbro (who does own the board game license) has been jousting with Fantasy Flight over whether Imperial Assault is a war game at all (after all, Imperial Assault bears a striking resemblance to Fantasy Flight's fantasy board game Descent). My view is that if these models are truly war games miniatures, they should be made out of war game grade material: durable urethane, resin or white metal.

But in the grand scheme of things, this is a just a quibble. Notwithstanding the soft plastic, the miniatures carry a lot of texture and detail (at least in their uniforms and weapons). I love the realistic sculpting style. They models have character and an authentic Star Wars feel. In sum: highly recommended! Stay tuned for my next post, when I talk about painting these miniatures.


UPDATE++++
If you're interested in Star Wars and the influence of Lucas on Warhammer, there have been a couple great posts by other writers/gamers following up on my musings: check out Tiny Basement's article on Storm Troopers & Space Marines and Private W.'s photography of his amazing collection of Star Wars Miniatures from Wizards of the Coast.

Posted by matthewjksullivan at 10:38 PM 18 comments: 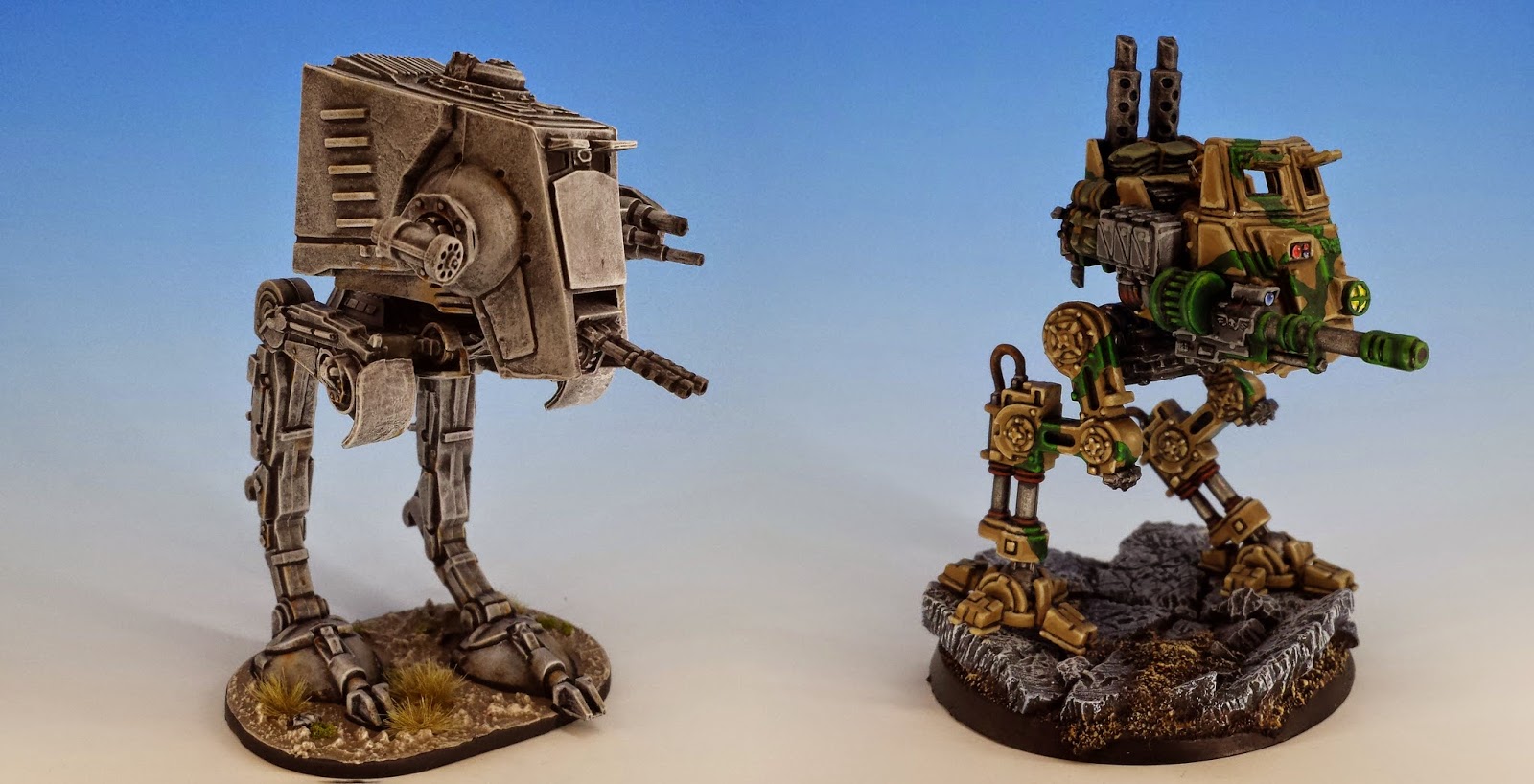 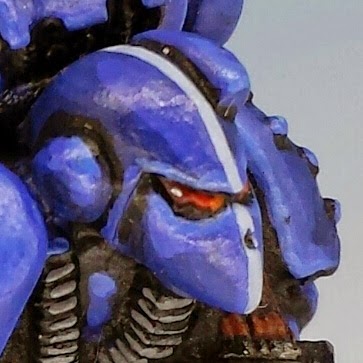 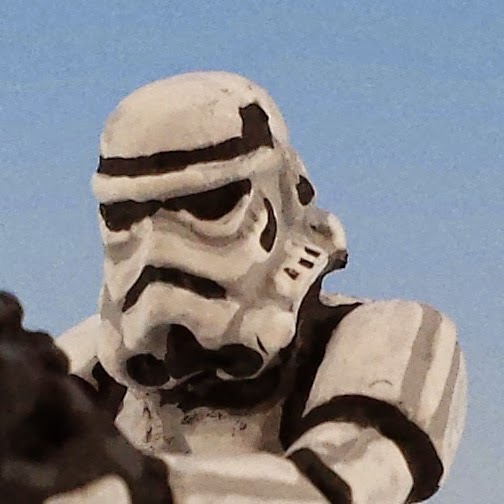 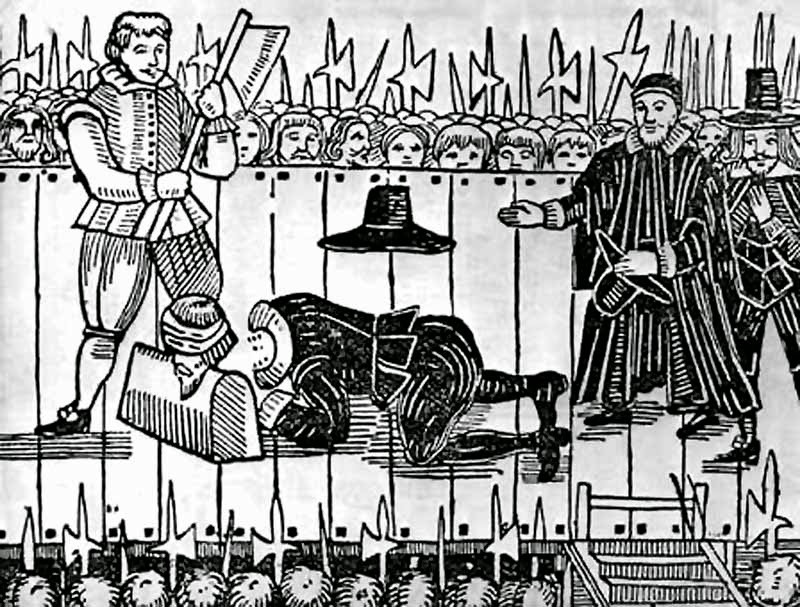 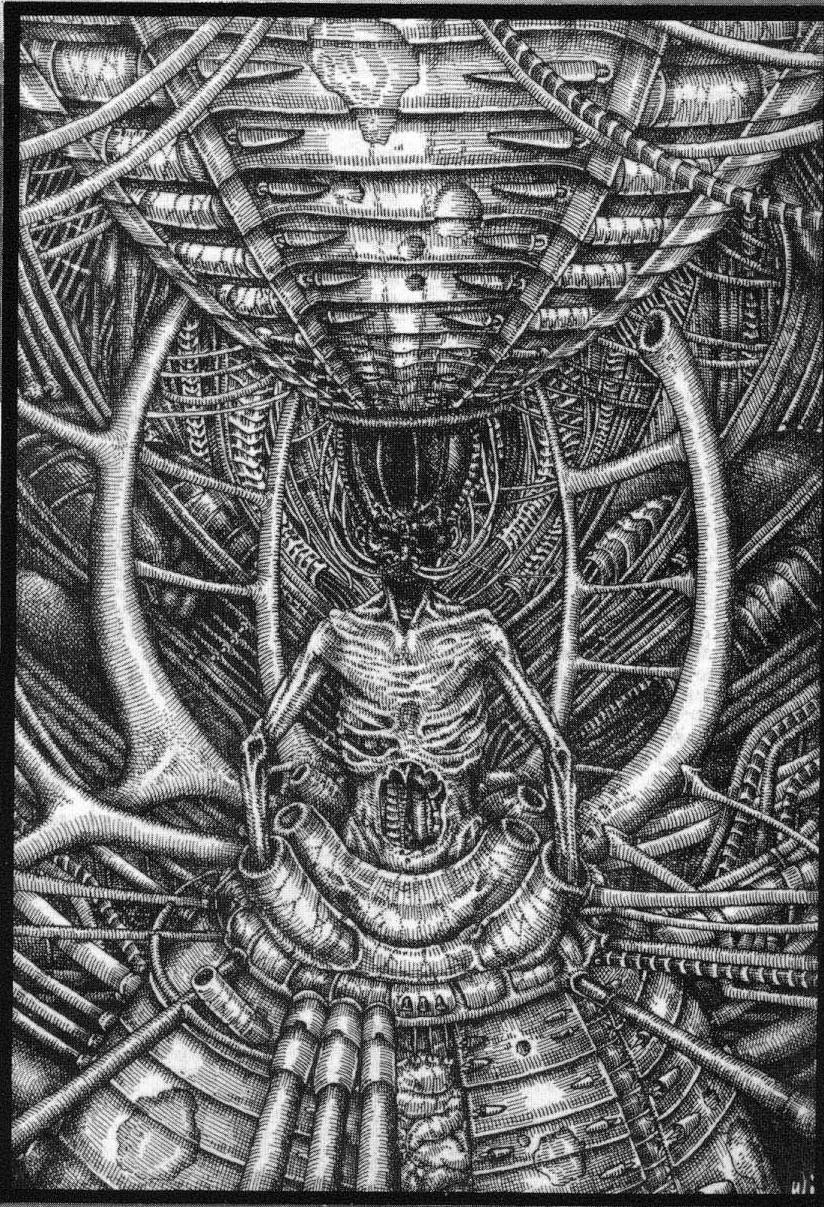 Star Wars miniatures in this post are from Fantasy Flight's Imperial Assault. Next week: more pics of my recently painted Star Wars minis...
Posted by matthewjksullivan at 10:21 PM 9 comments: