The Day the Vomit Died - an adventure in Mordheim 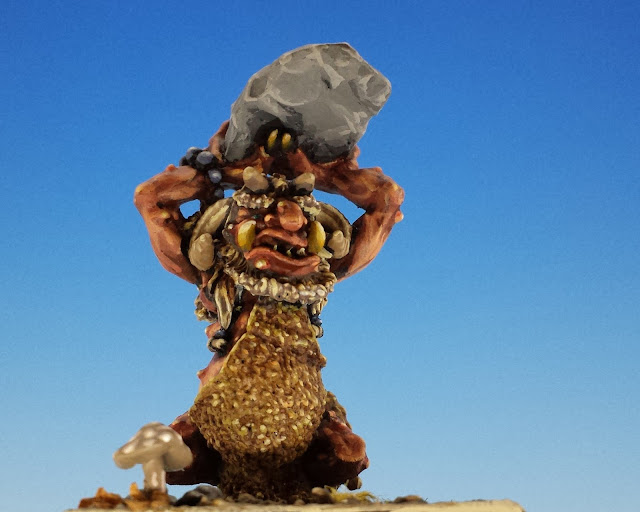 I just played my first game of Mordheim! Travis, the proprietor of the superb video blog Hot Dice Miniatures, invited me to his lair to film a battle for this classic fantasy skirmish game. Travis just posted the action-packed video of my orcs clashing with his Marienburgers, and I hope you enjoy the spectacle of two lads with high spirits and higher blood\alcohol levels going at each other hammer-and-tongs. But I warn you, it's not a happy story... for that day in Mordheim was the Day the Vomit Died.

My orc warband derives from my 3rd edition Warhammer Fantasy Battle army, Krapfang's Backwood Bandits. Loyal readers may recall General Krapfang's adventures, including The Bridge over the River Sty and the Battle of Cold Crumpet Farm. Clearly, Krapfang has fallen on hard times, since he has gone from commanding an army of greenskins to leading a small gang of Mordheim thugs. I figure he was the victim of a mutiny -- not altogether surprising, given the fact that he was never a capable general or a brave warrior.

After his ejection, what would be left to do but assemble a threadbare rump of loyal followers and bring them to the ruins of Mordheim, hoping to make a fortune gathering wyrdstone? 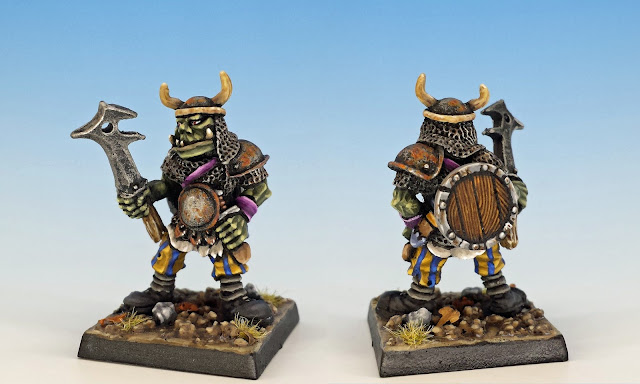 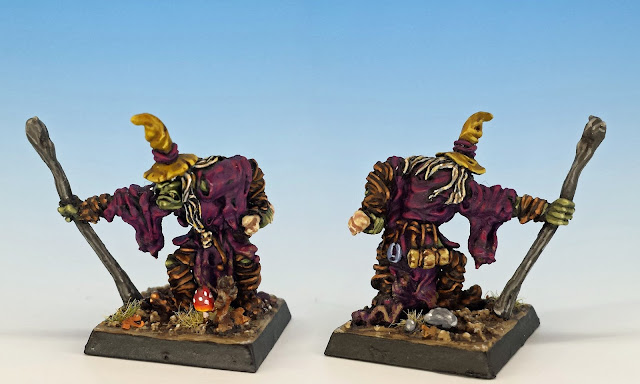 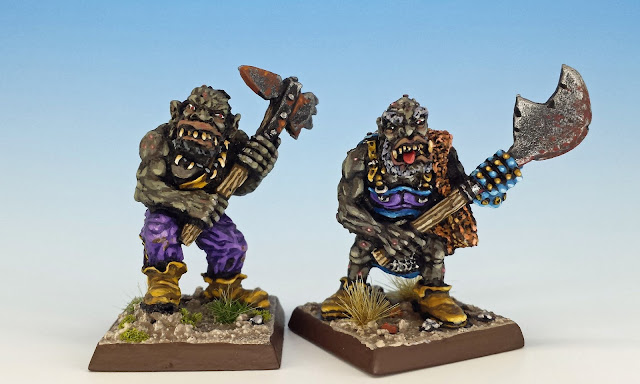 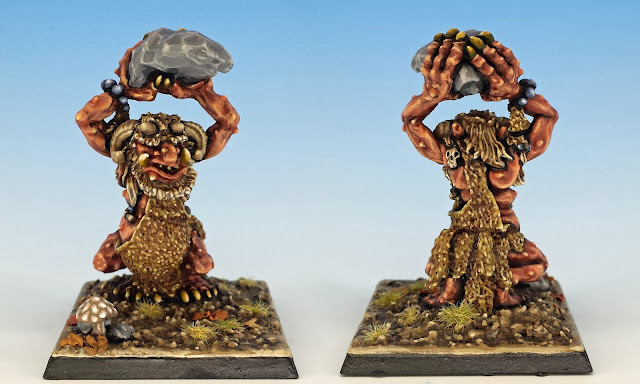 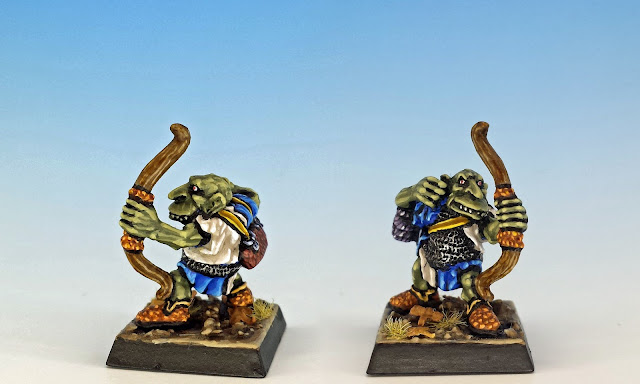 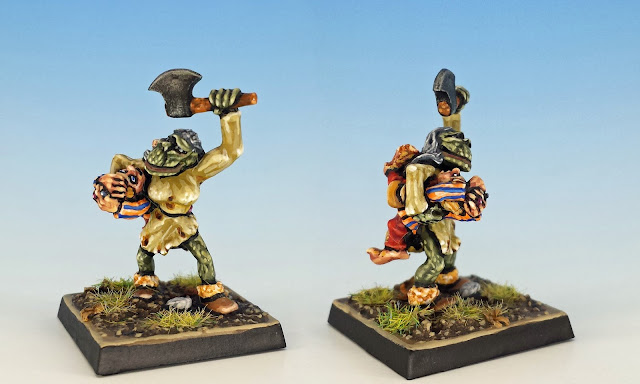 I've never designed a Mordheim warband before, but once I realized that the orcs could hire a Troll, everything fell into place. Krapfang's "cunning plans" always revolve around finding a big, hungry monster and then hiding behind it until the enemy is safely ensconced in its digestive tract. I rounded things out with a shaman, two elite warriors and some paltry missile support (in the form of Smarmy the Gobbo). Unfortunately for Krapfang, I had just enough points left over to include Ragwort Toothshyte. She is Krapfang's long-abandoned wife, and she's fastened to him like a hungry leech now that he lacks a phalanx of troops to keep her away. 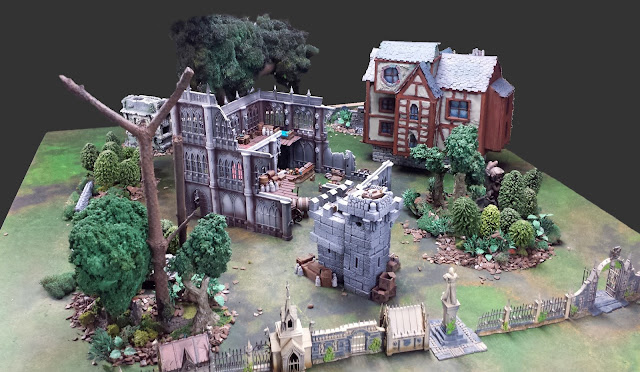 We played on Travis' fabulous table (pictured above) representing the ruined outskirts of Mordheim. He scratch-built much of the terrain, including sprawling trees, plaster-cast towers and a vast mansion. Not only was it beautiful, but it was the best-lit wargaming space I've ever seen, which made photography a joy.

My opponents were a well-supplied band of Marienburgers named "The Yuppies" who were led by Knock-Out Ned, a fashionable warrior armed with two dueling pistols. 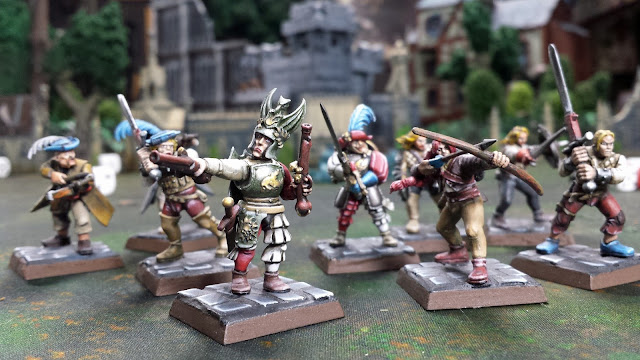 The Day the Vomit Died

We randomly determined the scenario and came up with "Chance Encounter", meaning that the two warbands stumble upon each other while they are both trying to escape from Mordheim with a trove of wyrdstone. There's no turn limit, and each side is trying to bash the other into a rout.

The Marienburgers set up first. Their vastly superior complement of missile troops (a hero with a bow and two henchmen with crossbows) occupied some ruined buildings with a wide field of fire. The rest of their forces fanned out, hoping to root out the orcs.

For his part, Krapfang decided that cowering was the best strategy. There's no way he was going to walk out into the open ground and get shot to hell. So he and his cronies hid in a darkened corner of the ruins, hoping to gank the Marienburgers one by one. Sneaking up on people is not so easy when you have a drooling Troll in your midst, but Krapfang was finally able to creep up on the Marienburger's left flank. As Smarmy ineffectually shot his short bow, Krapfang shoved the Troll forward, hoping he would pass his stupidity roll and mount a charge.

Things seemed to be looking up for Krapfang -- the Troll was shuffling forward, his shaman successfully cast "Ere we go", and the Marienburger crossbows had not found them. Hoping to overwhelm the enemy, he called for a general charge.

And that's when things went to pot. Sludgewit the Troll failed his stupidity check and forgot to attack the enemy, even as Krapfang and his orcs had committed themselves to an assault. In the building above him, the crossbowmen began to rain down bolts. And the Marienburg leader, Knock-Out Ned, surged forward to help his men.

The rest of the battle was one confused melee, as Knock-Out Ned sought to contain the orc charge with reinforcements and missile support. For his part, Krapfang was hoping to keep himself alive long enough for the Troll to wake up and save the day.

And wake up he did! On the next turn, Sludgewit came to his senses and hurtled into the fray, facing Knock-Out Ned himself. Krapfang had every reason for optimism, because Trolls have one nearly irresistible attack: they can regurgitate on their enemies. A Troll's gastric juices will melt a fully armoured man like a wax candle.

In the coming turns, as the orcs were gradually beaten back, Sludgewit puked again and again on Knock-Out Ned. But the horrendous attacks only succeeded in stunning Ned, or I would roll a 1 on the injury rolls and not even achieve that. There was so much vomit. But all that vomit was for naught.

Meanwhile, the Clarence Blackdung was felled by a crossobow, and then Krapfang himself was swept out of the game by two Swordsman. With Krapfang no longer there to prod him, Sludgewit had small hope of passing his stupidity checks, and would once again forget to fight. In order to save the rest of my warband (and the few pieces of Wyrdstone still in my possession) I voluntarily failed my rout roll and we ended the game.

It was a splendid game: fast, eventful and filled with disgusting gastrointestinal drama. If you enjoyed Travis' video of the game, you should also check out some of his other work, such as his tutorial on building a Mordheim band or his other Mordheim battle reports. 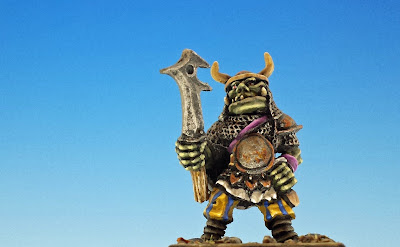 For my part, I am excited about finally getting into this game -- it's no doubt the best thing that Games Workshop came up with after about 1989. And although Krapfang was knocked out of the game, he was not killed, so I guarantee: he will be back, and he will be as big a coward as ever.

Posted by matthewjksullivan at 6:21 AM