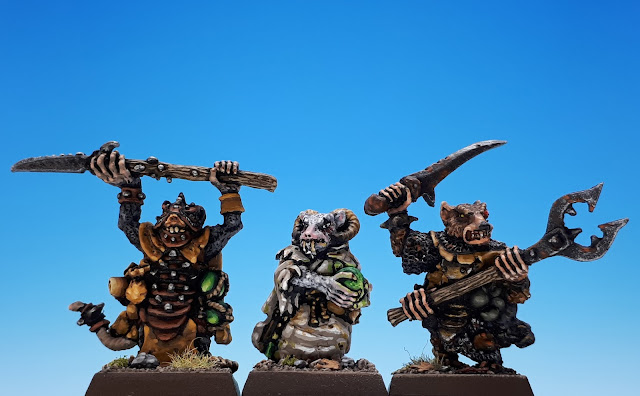 Gnawdoom the Grey Seer and Throt the Unclean are the two heroes who lead the Skaven forces in the scenario Vengeance of the Lichemaster (1986). They're assisted by two champions, Flench Packlord and Iron Wielder, plus a Skaven Flamerthrower Crew. Today I've got painted versions of all these miniatures.

The brief for the Skaven player in Vengeance of the Lichemaster tells the story from the ratmen's perspective. This background is worth quoting at length because it reveals some very special about the religious practices of the Skaven:


Last month, during the annual Great Feast of the Horned Rat, an enemy entered the city of Skavenblight, wormed his way into the ceremony itself and, during the sacred dedication to the Horned Rat, stole the Awesome Black Ark. Bounding onto the dais before the shimmering apparition of the Chaos God, a magically disguised figure was seen to leap towards the casket containing the Ark, at which moment the intruder and the Ark both vanished into thin air. The Skaven were momentarily frozen with astonishment as well as suffering the indignity of being caught looking the other way whilst bent double and baring their hairy buttocks (the traditional salutation to the Horned Rat at this time)...

In any case, the thief who caught the Skaven with their pants down is, of course, the wizard Bagrian. The brief goes on to describe how the Skaven player controls one of the many search parties sent out to recover the Black Ark. Gnawdoom has used his magical orb, the Seerstone, to track Bagrian to the monastery of La Maisontaal. The table is set for a grand battle... 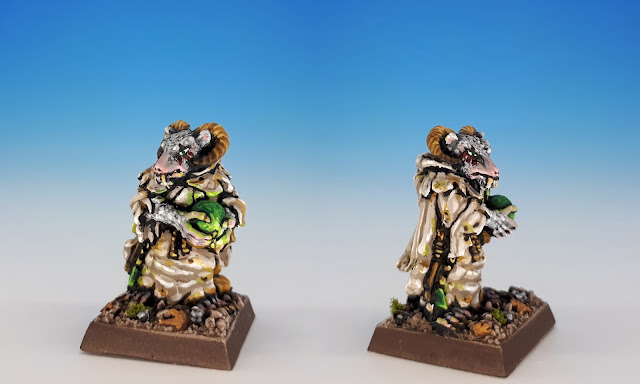 Above is Gnawdoom the Grey Seer from Citadel's C47 Skaven range, sculpted by Jes Goodwin in 1986. I painted him to resemble the illustration by John Blanche on the cover of The Citadel Journal Spring 86. 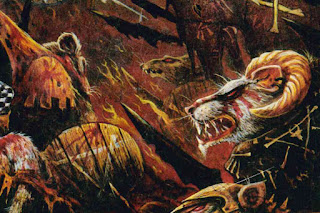 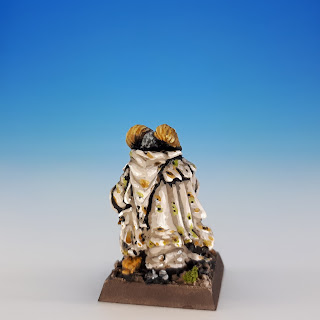 I love Goodwin's notion that white Skaven have a special place of prominence. As he wrote in his article introducing the Skaven: "The Grey Seers are extremely important and influential Skaven and would only rarely involve themselves in anything other than the most important conflict." Gnawdoom is distinguished by the fact that he carries the glowing Seerstone, which glows brighter as it approaches the Black Ark of the Covenant. He also carries a small triangular "key" of warpstone, which is the only way to open the Ark and activate it's awesome powers. 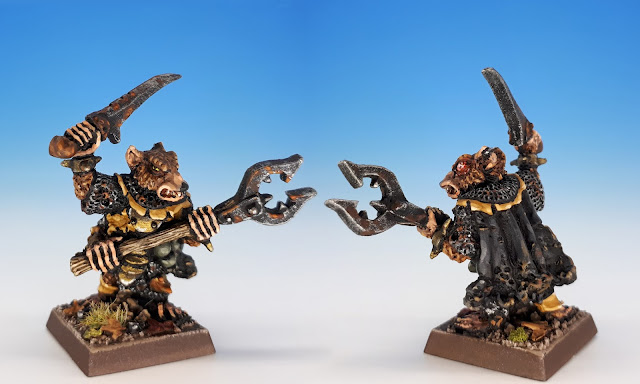 Above is the second in command of the Skaven war-party: Throt the Unclean (C47 sculpted by Jes Goodwin, 1986). Throt is a mutant with three arms and "a warpstone charm replacing one of his beady red eyes... this glows bright scarlet in the dark and whilst Throt is amongst the bloodlust of combat." I love his man catcher -- I can just imagine Throt snaring an opponent with this pole-arm and than using the knife in his third hand to finish the unfortunate victim. 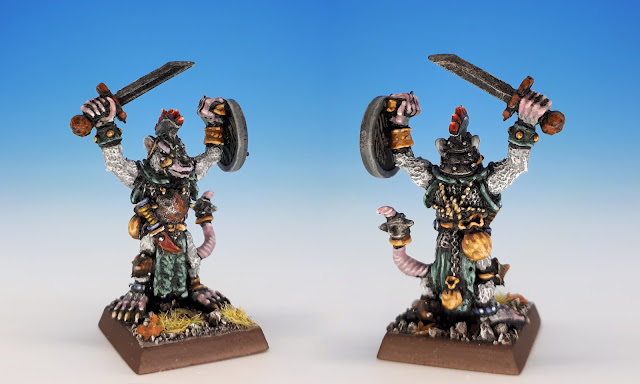 Here is Flench Packlord (C47 sculpted by Jes Goodwin, 1986). Flench is the first of the two Skaven champions. 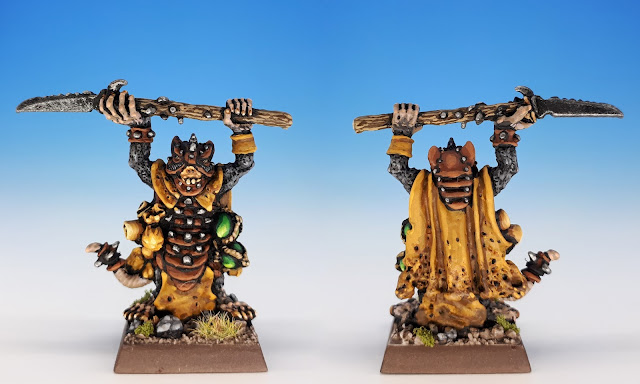 And above is the Skaven champion called Iron Wielder in Vengeance, or Malis Manwrack in the Citadel catalogues (C47 sculpted by Jes Goodwin, 1986). He's one of the classic Skaven leaders and is a staple in nearly every Skaven army from the 1980's. 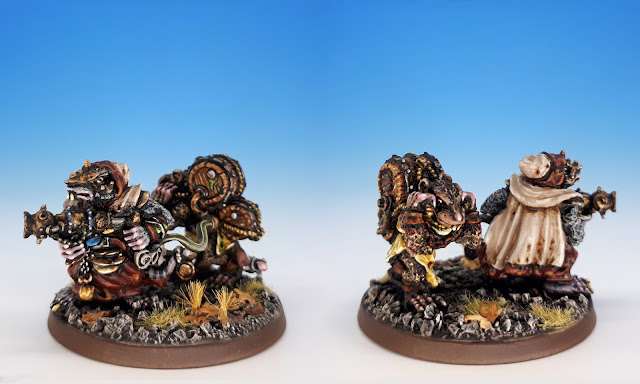 Finally, we have the Skaven Warpfire Thrower Team that accompanies Gnawdoom on his mission. The Citadel Journal gives the name of these two incendiaries as Scathe the Tainted and Flem (C22 and C27 sculpted by Jes Goodwin, 1986). There's a lot of detail packed into these two miniatures. 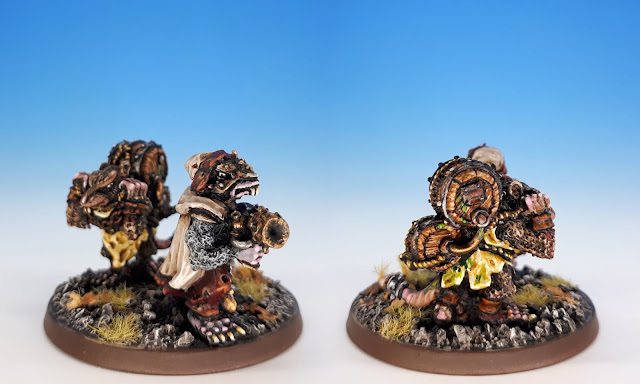 Thanks for dropping by! Next week we'll look at the rank-and-file in Gnawdoom's Skaven warband.

Posted by matthewjksullivan at 7:10 AM