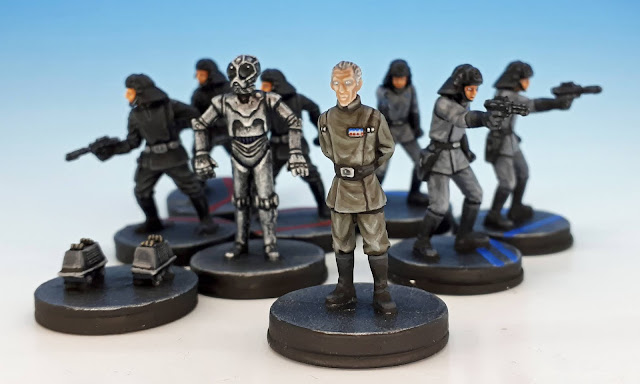 Every girl crazy 'bout a sharp-dressed man. At least this girl is. And I'm especially fond of the sailors... that is to say, the uniformed members of the Imperial Navy. Sure you have your glistening Stormtroopers, and we all owe Her Maj Darth Vader a debt of gratitude for marrying cybernetics with high-camp drag (that wide belt! that cape!). But I'd trade them all away in a heartbeat for the choke-collars, double-breasted woolens and saucy kepi caps of the Imperial Officer corps.
The strong sense of fashion filters down from the officers to the Imperial Navy's rank-and-file, who look just stunning in their flared helmets and high "fuck-me" boots. So let's commence a brief tour of Death Star chic, using some re-painted Wizard of the Coast plastics:
First up are some standard issue Imperial Navy Troopers. I've always thought that such troopers are sadly under-represented in Star Wars wargaming. The elite nature of the Stormtroopers is lost if they appear willy-nilly in every battle. Note the hesitant aiming, clenched fist and chin-straps. Doesn't it all just cry out, "I'm a big boy now!" 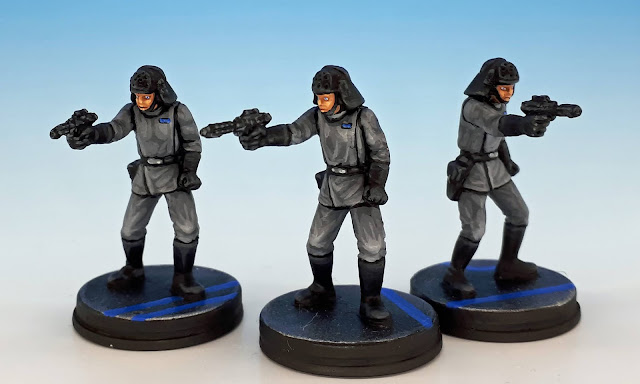 Next comes the Death Star Troopers. These are the elite that Grand Moff Tarkin hand-picked to man his planet-destroying battle station. I wonder if he was the one who chose the butch black uniform: 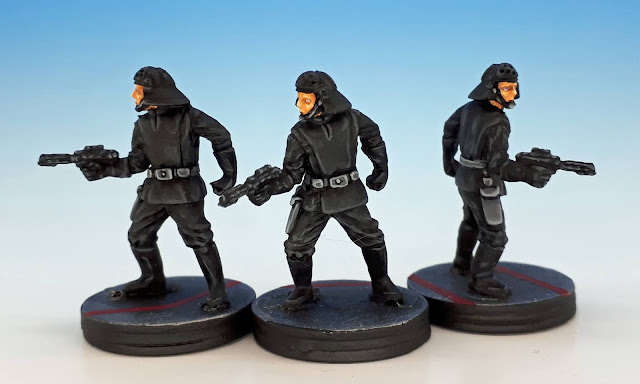 Lapdogs are strictly forbidden aboard the capital ships of the Imperial Navy, so the officer class occupy themselves by coddling the MSE-6 Mouse Droids: 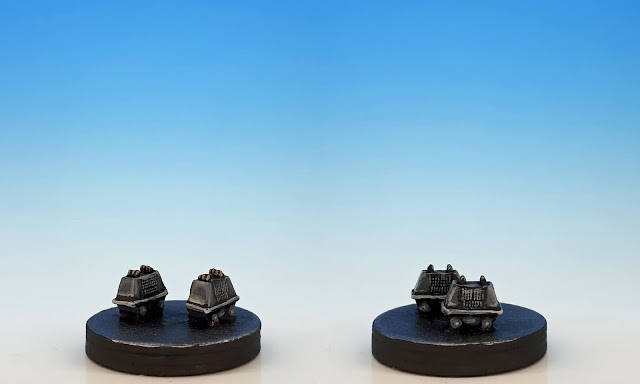 Here is a RA-7 Protocol Droid, also known as the Death Star Droid. I said a few weeks ago that the twins Aleksin and Pavol are the first openly gay figures in the Star Wars canon. That may be true, but protocol droids have long been recognized as LGBTQ+ icons. Writing in Mel Magazine, Jospeh Longo described C-3PO as "science fiction's first great queer character" and "a wiry, aging twink droid in love with an old queen, R2-D2."
The Death Star droid certainly fits that pattern. With his dignified mince and belly-exposing crop-top, this darling is practically begging for a night at the Rail. 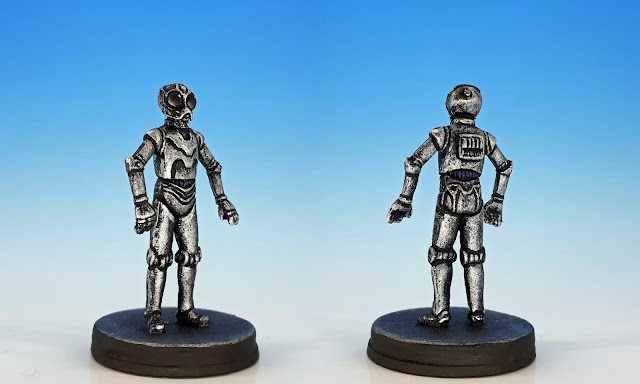 And finally, I present Grand Moff Tarkin, who is absolutely rocking the angry daddy vibe. Princess Leia probably said it best: "Governor Tarkin, I should have expected to find you holding Vader's leash." 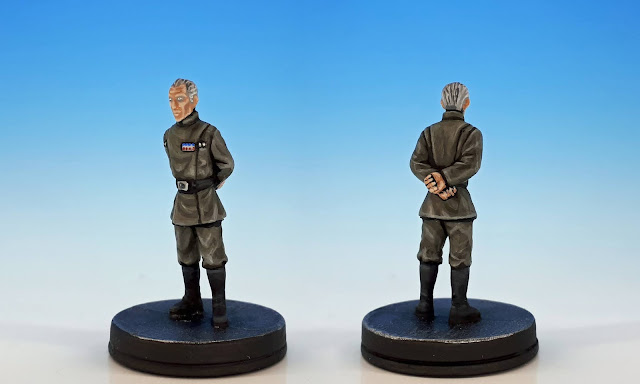 "...The Empire Strikes Back is heavily indebted to girls, to gays, to drag, to dance, to European traditions of camp and opera and being too much, with its excesses manifesting in spectacular effects, in the availability of male bodies for desire and consumption..." 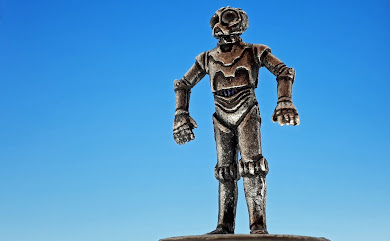 Stay safe, my friends!
Posted by matthewjksullivan at 7:02 AM 10 comments:

Miniatures for the Mos Eisley Cantina 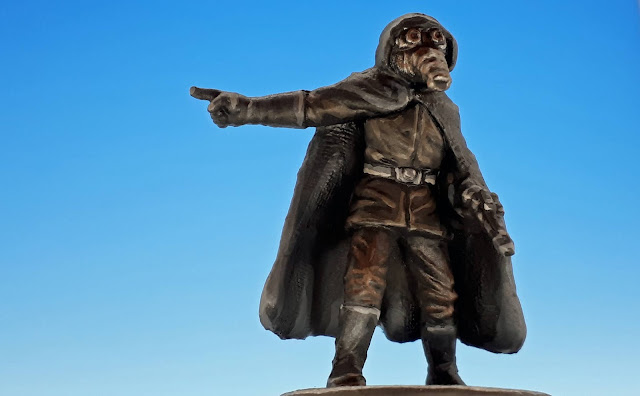 Luke Skywalker's entry into the cantina on Mos Eisley is the defining moment of the first Star Wars movie. The scene introduced a universe without definitions. It promised us that everything to come was an open-ended journey, in which every face in every crowd has a history if only you're lucky enough to hear what it is, or imaginative enough to invent it on your own. As the writer Patrick Cavanaugh said, "Even though we knew nothing of these ancillary characters, their appearances conjured all sorts of backstories in our minds, allowing us to flesh out countless adventures within this world in just a matter of moments."

So iconic was the Cantina scene that it created its own trope. Almost every other movie in the Star Wars franchise (and many other sci-fi films) has a scene echoing Mos Eisley. Although it's tempting to dismiss this as crass imitation, I see it in terms of epic poetry. An epic is defined by certain conventions: for example, there must be a scene in which the heroes partake in a counsel of war, and there must be a long, boring recitation of the order of battle (like Homer's "catalogue of ships" or Tolkien's description of the knights entering Minas Tirith). The cantina helped define the sci-fi genre by creating a new (and deeply satisfying) convention: the bar full of aliens.

Here are my renditions of some of the more famous faces in Chalmun's Cantina, all of which are repainted versions of plastic WOTC miniatures...

First comes Ponda Baba, the club bore whose arm gets cut off. I will always have a soft-spot for this Aqualish alien, because one of the first Kenner Star Wars figures I owned as a child was "Walrus Man." 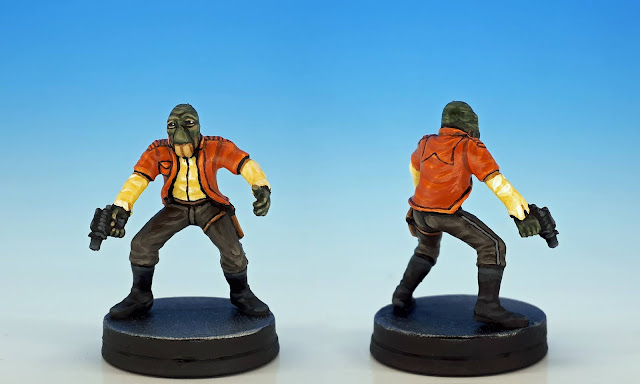 Dr. Cornelius Evazan is Ponda Baba's companion. Evazan appeared in both A New Hope and in Rogue One after taking time off from his regular gig in the belltower of Notre Dame. 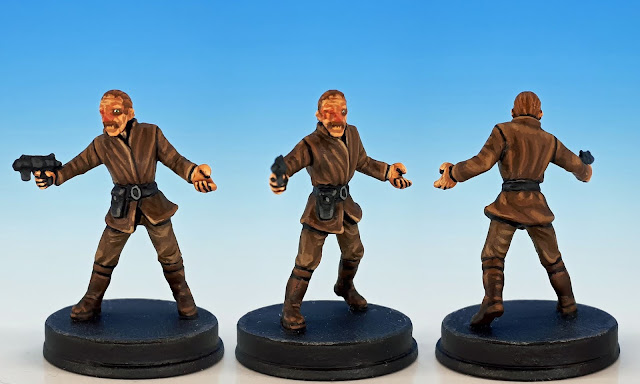 BoShek is the smuggler who introduced Obiwan to Chewbacca when the old Jedi was looking for a ride off of Tatooine. That black flight suit looks quite natty, if you ask me. 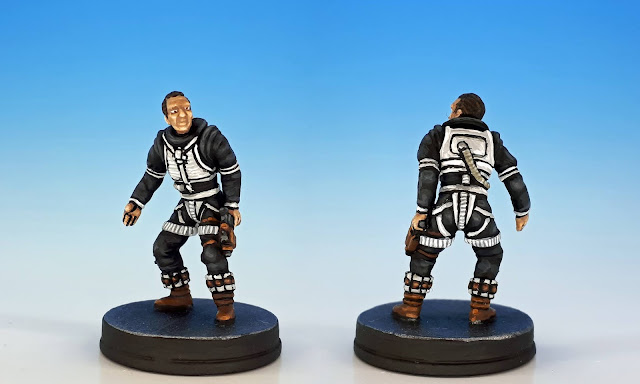 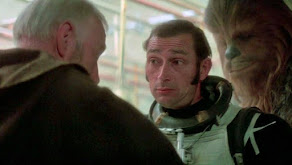 Takeel (also known as Snaggletooth) is a Snivvian mercenary and drug addict. He's another inmate of the Cantina who owes his fame less to the movie and more to his afterlife as a Kenner action figure. I hope you appreciate the disco-vibe of his leisure suit. 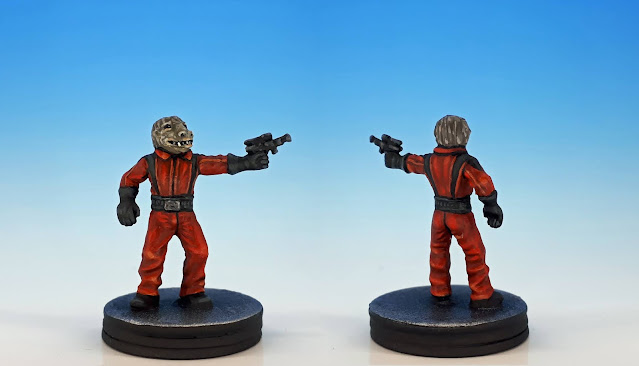 Can you imagine going through life with a name like "Muftak the Talz"? 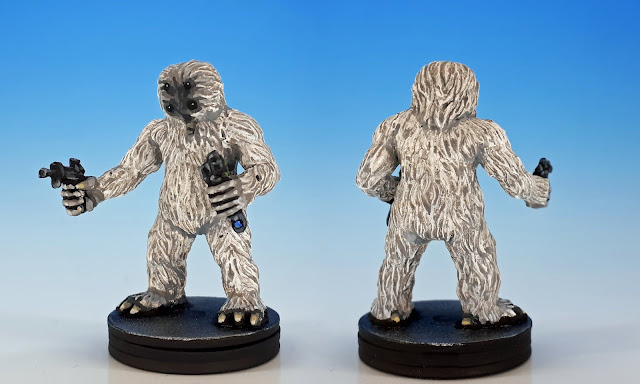 And finally, we have my favourite: Garindan. He's the one who spotted the fugitive droids Threepio and Artoo outside the Cantina. He may be an Imperial spy and general cheese-eating tattletale, but he looks so good. 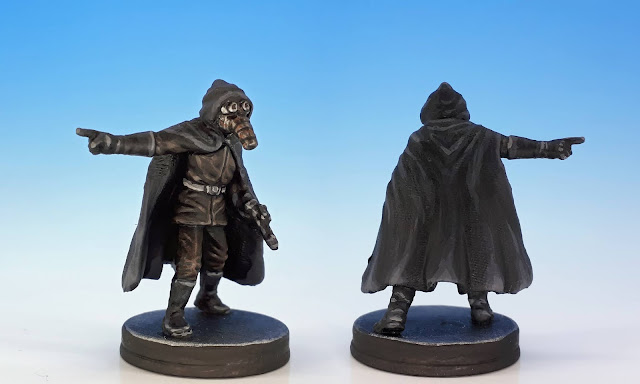 I hope no one is ratting on your droids, my friends. Be well! 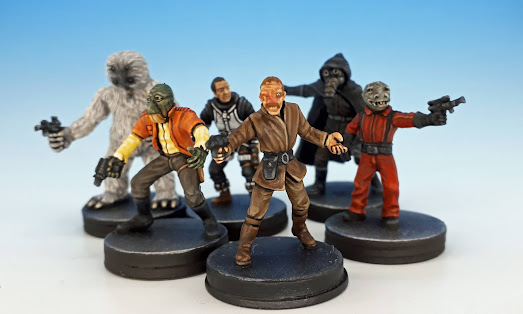 Posted by matthewjksullivan at 5:58 AM 19 comments: 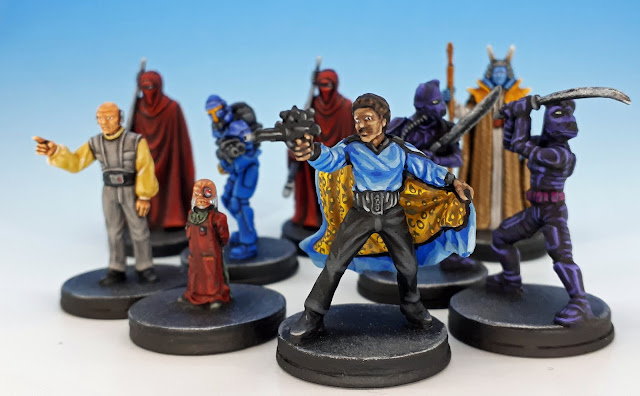 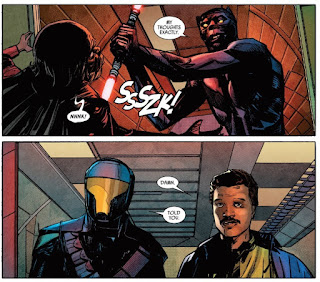 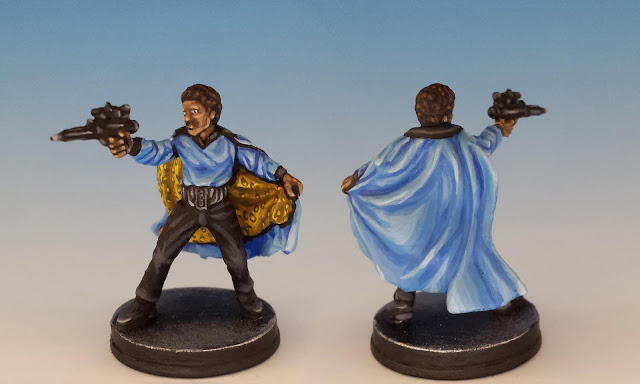 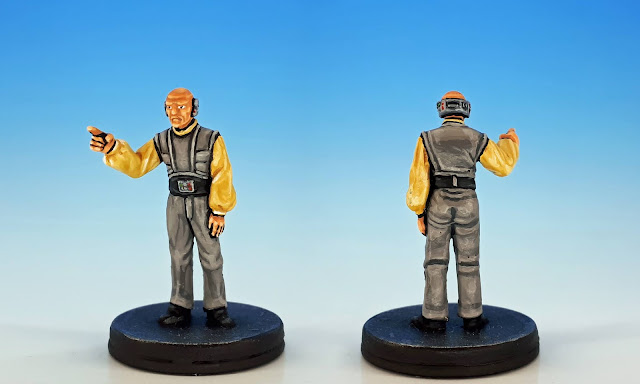 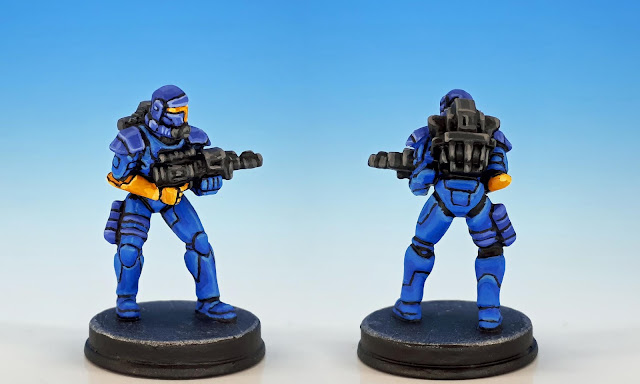 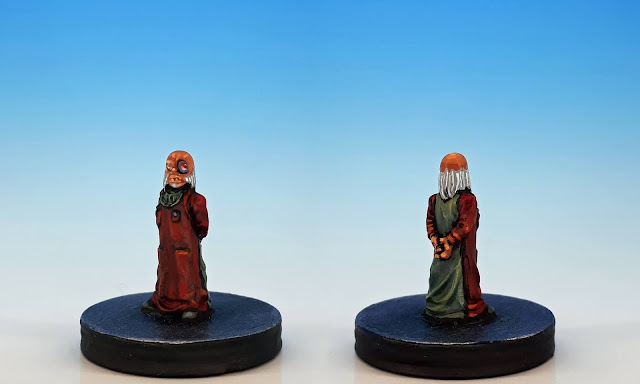 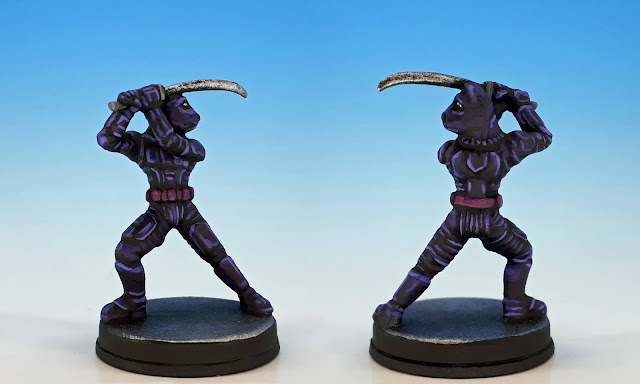 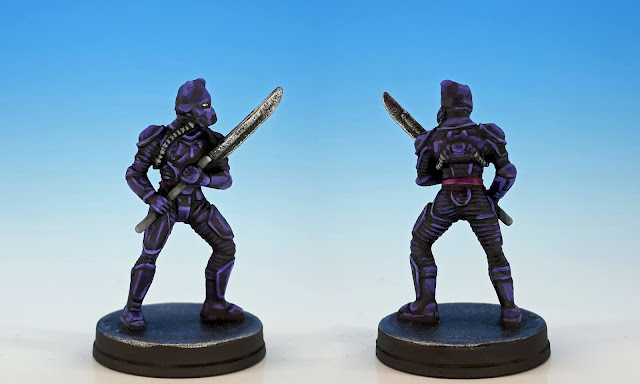 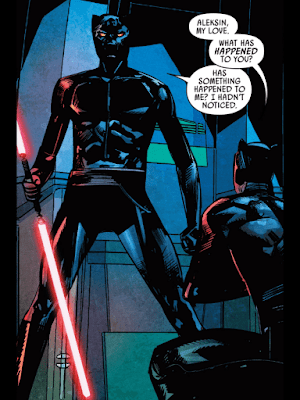 Posted by matthewjksullivan at 6:54 AM 12 comments:

I've had a lot of time off since Christmas but my miniature painting mojo has vanished. I think it's a combination of Covid fatigue, winter blahs and insurrection-induced anxiety. I might also be tired after finishing a series of painting projects (like the 40K mercs). But I still needed an outlet for my creative urges, so I turned to a enterprise I've been flirting with for a long time: taking some of the ancient stories about Zen Buddhism and animating them into one-minute movies using cartoon bunnies and computer-generated voices.

I guess there's a time in every man's life when he says to himself, "I want to take some of the ancient stories about Zen Buddhism and animate them into one-minute movies using cartoon bunnies and computer-generated voices." And for me, that time is now.

The source material comes from The Blue Cliff Record, which is a 1000-year-old collection of dialogues spoken by Zen Masters from Tang Dynasty China. These dialogues are often called cases or koans. A "koan" is a Japanese transliteration of the Chinese word gōngàn, which meant "a decision of a judge." In each of these stories, a Zen Master pronounces a judgment about the nature of enlightenment. But in trying to describe the highest truths of Zen, these monks often relied on non-sequiturs, one-liners and radical understatement.

In order to animate this deadpan absurdity, I needed equally deadpan characters -- hence the robotic voices and big-headed puppies. Above is my rendition of the first case from The Blue Cliff Record, where the mythic founder of Zen has an awkward conversation with the Emperor. The next one I did was the 28th Case, where two Zen Masters talk about the importance of not talking about anything important:

Finally, I illustrated one of my favourite stories, the 74th Case, where a series of Zen Masters give unhelpful advice about gratitude, happiness and generosity.

I don't know if anyone will enjoy watching the movies half as much as I enjoyed making them. But I wanted to share them in case they might be some help in dispelling your own winter blahs.

Posted by matthewjksullivan at 9:11 AM 8 comments: