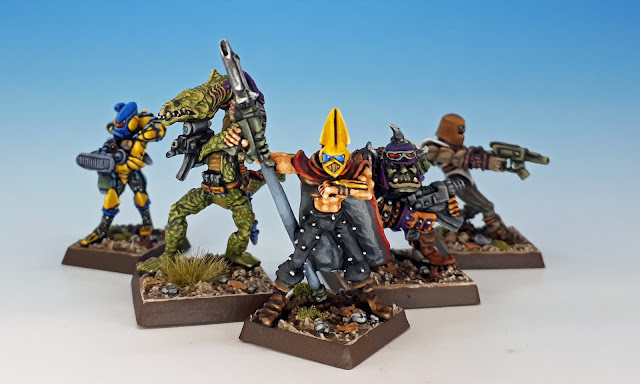 Warhammer 40K may be the most popular tabletop wargame in the world, but it started with a whimper not a bang -- at least in terms of the miniatures. The first murmur came in August 1986, in the Citadel Miniatures Mail Order Sheet. Amid offerings of models for Doctor Who, AD&D, and Thrudd the Barbarian, there appeared an unassuming advert for eight "Imperial Marines". I will have more to say about these lovely but undersized miniatures in a coming post. For now, we can just note that there was no mention of a new game or a new sci-fi universe, Rogue Trader or 40K. Then quiet reigned for almost a year.

In March 1987, the Citadel Miniature's Mail Order Flyer advertised 14 new miniatures under the official label Warhammer 40,000 (Rogue Trader). It was not clear who these miniatures were, what you'd use them for, or what "Rogue Trader" even meant (although attentive readers might have remembered that as early as 1983, Rick Priestly had been teasing rules for an intersellar ship/trading game called "Rogue Trader"). In any case, things didn't get any clearer in August 1987, when White Dwarf #92 featured a mysterious full-page teaser consisting of an empty star-scape emblazoned at the top with the insignia of the new game. Finally, the Rogue Trader rulebook was published in September 1987. In the same month, White Dwarf #94 featured a long profile of the game. From that moment on, the stream of 40K miniatures has never ceased.

Let's return to the first 14 official Rogue Trader miniatures from March 1987 -- the range that would later become known as RT1.
Looking at them now, what surprises me is how half-baked they are. The names are redundant (i.e. "Imperial Heavy Trooper" versus "Imperial Heavy Infantry"). The intriguing nomenclature that would become a hallmark of 40K is entirely absent: we have an "Imperial Bodyguard" rather than an "Adeptus Custodes", or an "Imperial Psycher" rather than an "Astropath." The miniatures do highlight the great innovation of 40K, which is the shameless combination of sci-fi tropes with Tolkien-esque fantasy races. However, they highlight this new approach in a ham-handed way: the new Orc is a "Space Orc", the goblin is a "Space Goblin", and the dwarf is a "Space Dwarf". This is Space Hamsters with a vengeance. 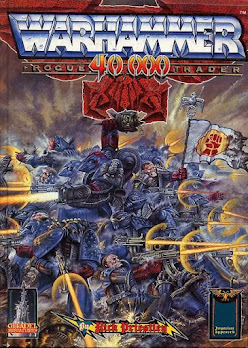 The sculps themselves are a mixed bag. There is an awful lot of duplication for such a small range of miniatures. The "Light Trooper" and "Garrison Trooper" are siblings based closely on the same prototype; so also with the "Heavy Trooper" and "Heavy Infantry". The "Pirate" is ripped from "Cedric", a fantasy C01 Fighter sculpted by Bob Naismith in 1986.
Some of the figures are awkward to the point of ugliness. The design of the "Piscean Warrior" is so flat that it almost appears two-dimensional. Similarly, the Dark Elf Trooper looks like he is trying to squeeze between two parked cars before shooting you with his ridiculously flared weapon. (When I mounted both minis on bases, I had to spread their limbs and twist their torsos in order to add a sense of depth.)
Finally, almost all these miniatures are strangely divorced from the world of 40K that was about to unfold in the Rogue Trader rulebook: The "Piscean Warrior" is an orphan without past or future; the Squats of 40K look nothing like the "Space Dwarf"; the Eldar of 40K look nothing like the "Dark Elf Space Trooper"; and the Imperial Guard look nothing like the various troopers marching through the range. RT1 became outdated the moment the Rogue Trader rulebook appeared. Indeed, to the extent that these figures survived at all, it was only by being rebranded for other ranges. Several of them wound up in my beloved range of RT07 Mercenaries. Others snuck into the RT06 Adventurers. The rest perished in obscurity.
I love these miniatures so dearly precisely because they are awkward and unpolished. They are a fossil from a time when the world of Warhammer 40K was still forming -- a prehistoric era before names were invented, shapes settled, or identities solidified.
And so, without further ado, here are the first four miniatures of the RT1 range of Rogue Trader miniatures...
*    *    *    *    *
First we have "The Telepath". With his tonsure of neural implants and blank expression, he bears a striking resemblance to Lobot from The Empire Strikes Back. I don't love this miniature because it's so static. He would go to reappear in the RT06 Adventurers range as "Tech Priest Zon". 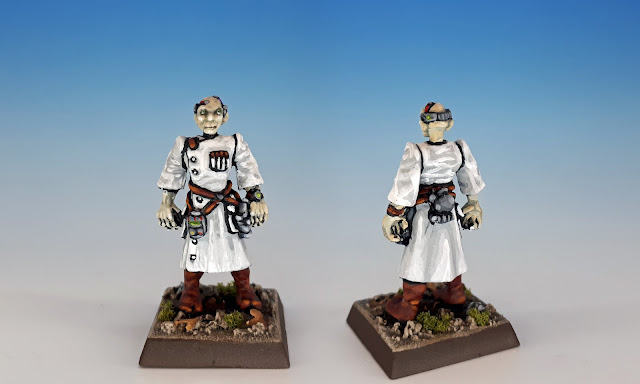 Second comes the "Ground Combat Trooper". Loyal readers will know that I've already featured this miniature as the RT07 mercenary Abaddon. He's got a beautiful design. With the tubes, baggy envirosuit, and face-window, he's always reminded me of the Sardaukar Troopers from David Lynch's Dune (1984). Although it's hard to pin down the sculptor for some of the miniatures in the range, thanks to the work of Axion at Magpie and Old Lead, we know that Bob Naismith carved this one. 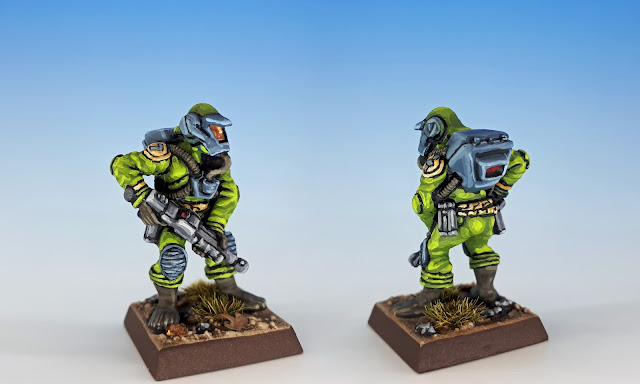 Behold the "Piscean Warrior". There's some wonderful detail on this slimy alien, including a host of flesh-tubes and a inlaid scabbard that seems to come right out of R'lyeh. But, as noted above, this large figure is marred by a flat and linear design that perfectly encapsulates the worst of slotta-base-sculpting. 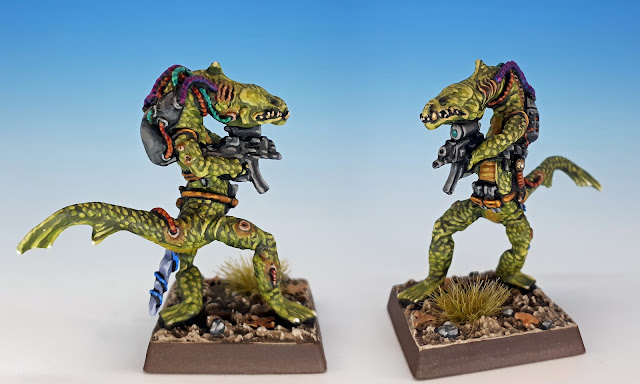 And finally, here's one of my favourite Rogue Trader miniatures: "Space Dwarf", better known to his friends in the RT7 Mercenaries range as "Irn Bonce the Squat". This is a figure sculpted with great style: a simple, harmonious and balanced design. Plus a grenade launcher. 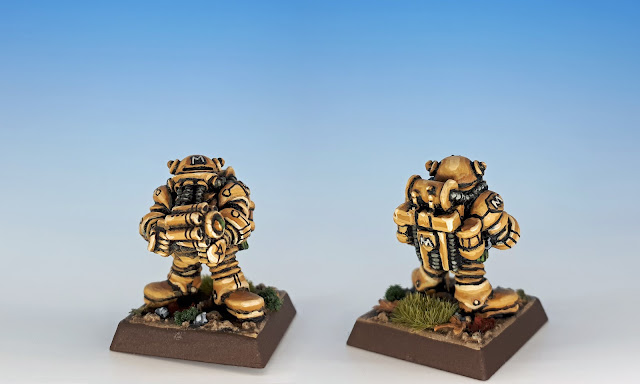 Thanks for stopping by! It's nice to be sharing things with you again!
Here is the post for the next 4 minis in the RT1 range...
Posted by matthewjksullivan at 4:26 AM