I'm high on Bob Olley. My latest foray into his world are two of the 4011 Adeptus Mechanicus Servitors he sculpted in 1989.

Painting Olley miniatures is often challenging, but these two were a joy. The facial expressions -- by turns crude, servile and sedated -- emerged from the brush without any specific intention on my part. The wonderful details (like the wires, implants and bionics) were crisply carved and easy for me to delineate. The two miniatures seemed to paint themselves.

It's a reminder that part of the miniature sculptor's art is to help the painter. After all, it is the painter who will have the most intimate, the most delicate experience with the sculptor's efforts. Indeed, few other visual artists can console themselves with the notion that there is someone out there who will spend hours and hours contemplating the most minute details of their work. (I just spent some time in the Uffizi Gallery in Florence where I was confronted with some of the greatest sculpture in human history. But with the crowds seething around me, I couldn't spend more than a few moments looking at each individual piece).

I wonder whether miniature sculptors often get feedback from their customers on the experience of painting their models. I hope so!

Here is the first of Mr. Olley's magnificent miniatures. This is "Servitor" 4011-06. 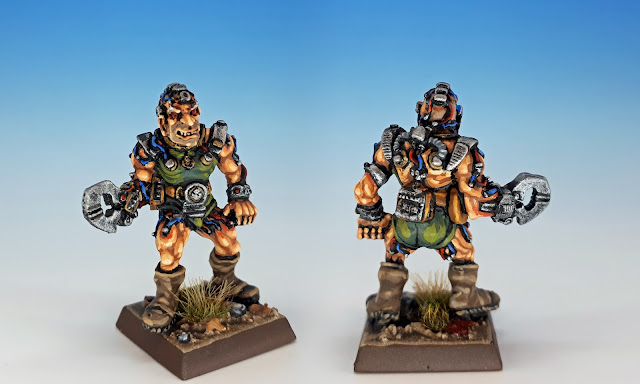 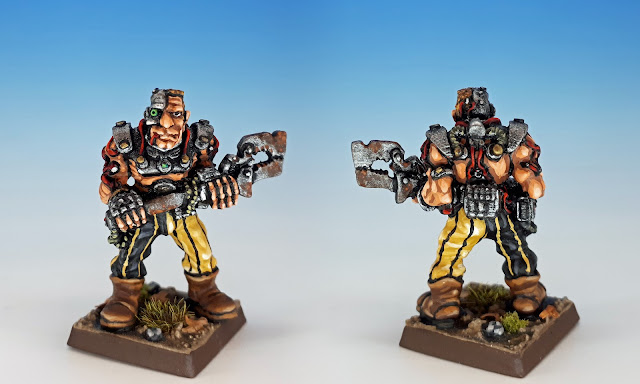 The only other miniature I know who was as easy to paint was the "Mad Punk" (below) from the RT601 Adventurers. Are there any sculptors whom you think are particularly good at making life easy on a miniature painter? I'd be very interested to hear your thoughts in the comments. 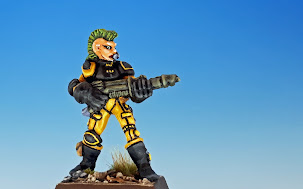 Posted by matthewjksullivan at 6:42 AM 16 comments: 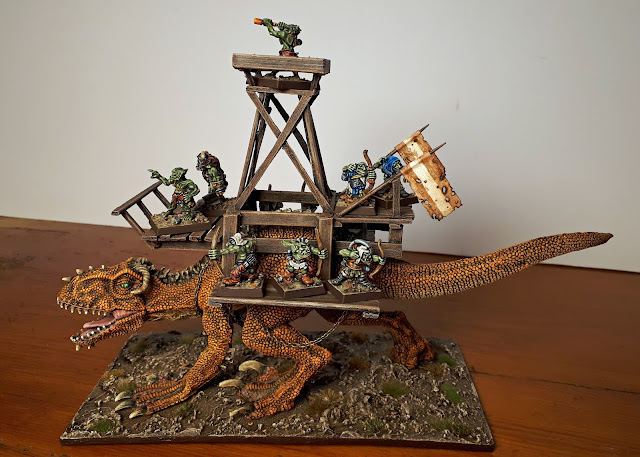 I've always wanted to model a War Monster and last January I finally did it.

The incitement for this project was reading Saga: Age of Magic (2019) by Alex Buchel and Fred Machu. Saga has been one of my favourite rule-sets since the first edition sprung on our hobby in 2011. Age of Magic adapts the second edition for fantasy skirmish games. One of the strengths of the book is that the authors give their imagination free reign when it comes to units: besides great dragons and giants, there are rules for fielding the Four Horseman of the Apocalypse or Hern's Wild Hunt. But most intriguing for me were the rules for one gigantic beast who swarms with drivers, archers, and crew. I was hooked by the requisite dimensions for the model: a base between 8 and 12 inches long. Since Saga games usually occur on a 3x4 foot board, this single miniature would occupy a huge part of the available real-estate. A real monster!

Of course, it wasn't Saga that first gave me the idea for the great beast. One of my favourite books when I was a small child was Steven Kellogg's The Wicked Kings of Bloon (1970). This priceless gem of a book features two obnoxious brothers who go to war with each other by arming and armoring great dinosaur-like monsters. The brothers' struggle for domination is brought to an abrupt end when their dinosaurs decide that they'd rather cuddle than fight:
And then, of course, there's White Dwarf #100 (April 1988). This special anniversary edition featured the work of the German modeler Michael Immig, whose incredible dioramas captured the attention of John Blanche when they met in Hamburg. Michael's "Fighting Dinosaur" is more than a model - more than even a work of art. It is a shamanistic fetish constructed out of chestnut shells, mouse bones, old buttons and fir cones (not to mention an Airfix Brontosaurus and innumerable Citadel miniatures).I could never emulate the complexity and beauty of the "Fighting Dinosaur". But I did take from it the idea that a great beast's howdah should be a ship-like construction, complete with look-out tower and different decks.

Ultimately, I decided to do something simple. I wanted a model that could be used for different settings: an orcish beast for Saga, a piece of moving scenery in Warhammer 40K, an exotic adversary for Star Wars skirmish games.

To ensure a variety of different miniatures could stand (or even fight) on the howdah, I tried to make it broad and easily accessible, without many railings, walls and other accessories that might get in the way. I didn't want a diorama so much as a functional model.

The beast itself in a plastic dinosaur from Amazon. I added a few choice details with greenstuff and brass chain, and then primed him black. The painting was dead simple: I brought out the colour with successive layers of drybrushing over his rough scales. 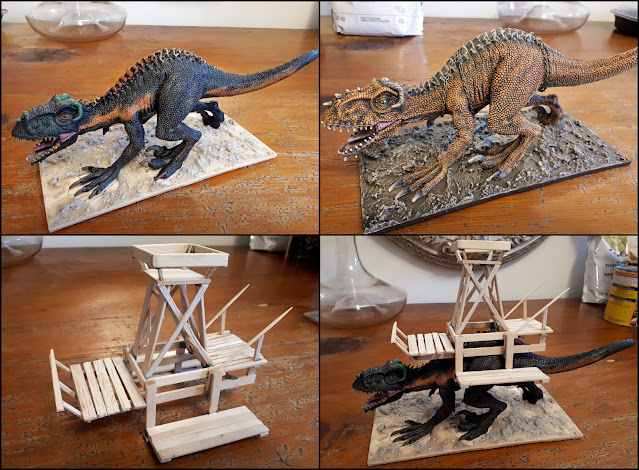 The howdah is an amalgamation of balsa wood and popsicle sticks welded together with industrial quantities of superglue and greenstuff. I think I could sit on it and it wouldn't snap.

Overall, I'm pleased with the results, especially when it's loaded down with Krapfang's Orcs. 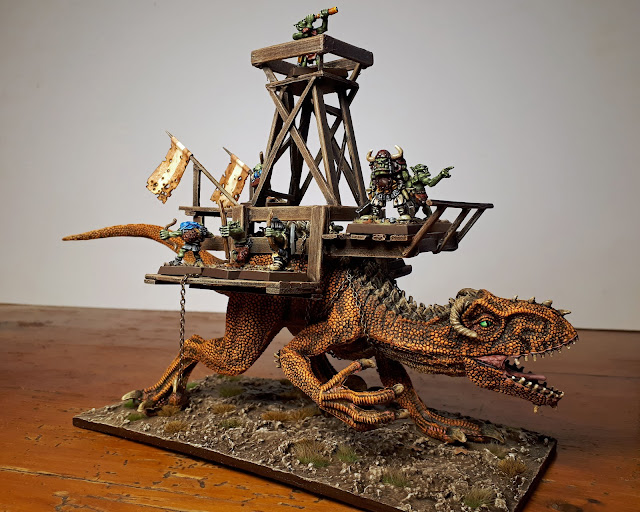 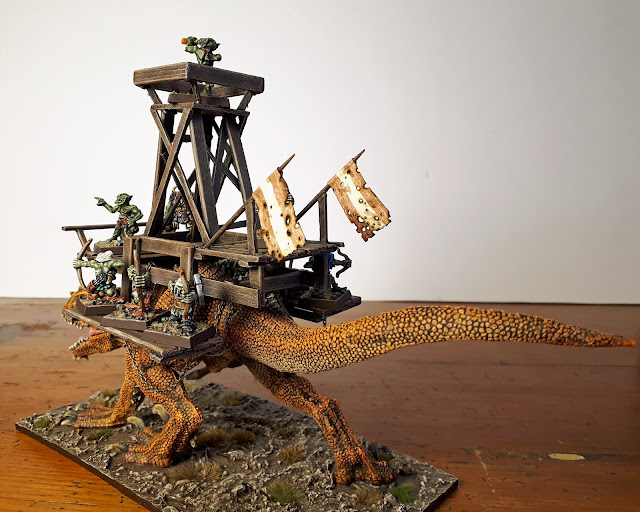 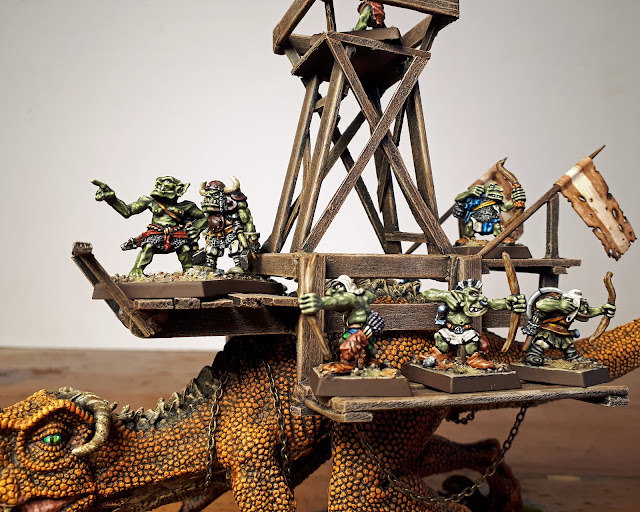 Now I just need to see how it plays in a game of Saga... 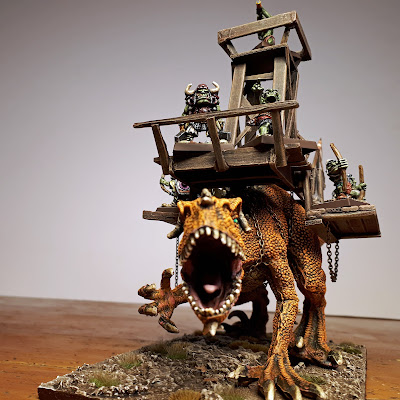 Posted by matthewjksullivan at 6:03 AM 28 comments:

For those of you who might be interested in my other writings, I recently had a couple articles published in Watkins Mind, Spirit, Body Magazine. 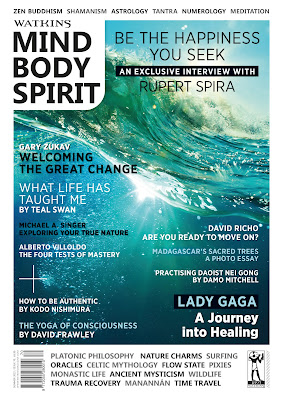 My print article on Zen koans is available in the Summer 2022 issue (pictured above). Who would have guessed I'd ever share a table of contents with Lady Gaga?

And there is another article (with no paywall) on the Watkins website about my dad's death last summer.

It's a real honour to be published in Watkins. The magazine grew out of Watkins Books, which is the oldest esoteric bookstore in London (and one of the oldest in the world) - being founded in 1897 by a friend of the theosophist Madam Blavatsky.

If you're curious about my writings about meditation and Buddhism, my author's website is www.bluecliffrecord.ca
Posted by matthewjksullivan at 3:11 PM 4 comments: