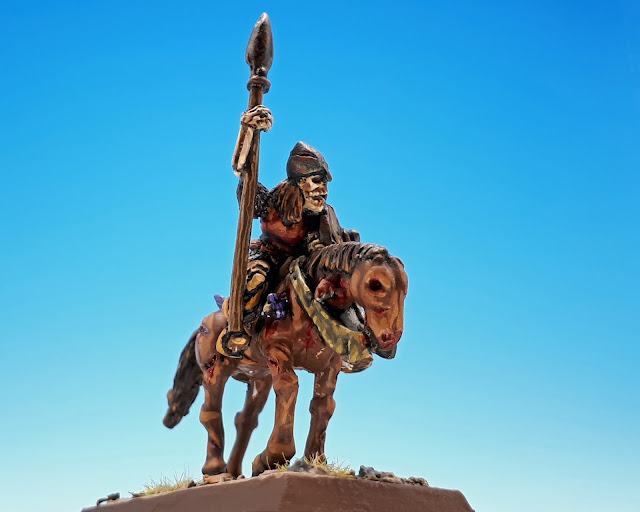 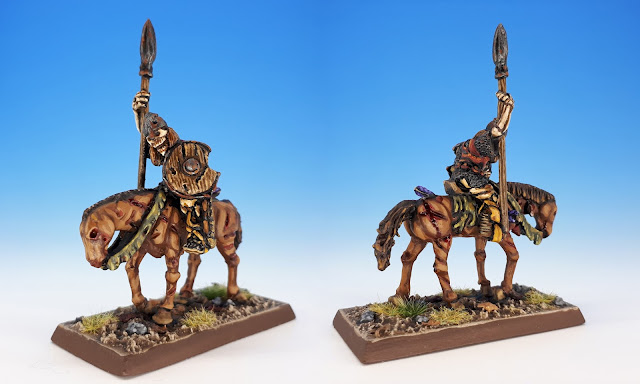 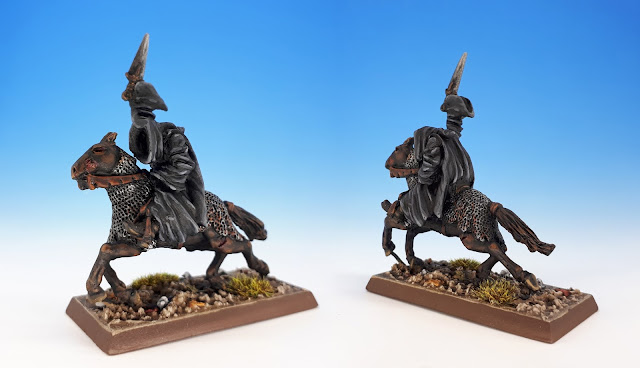 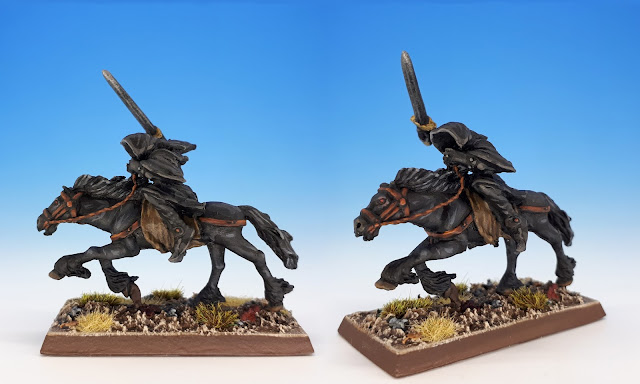 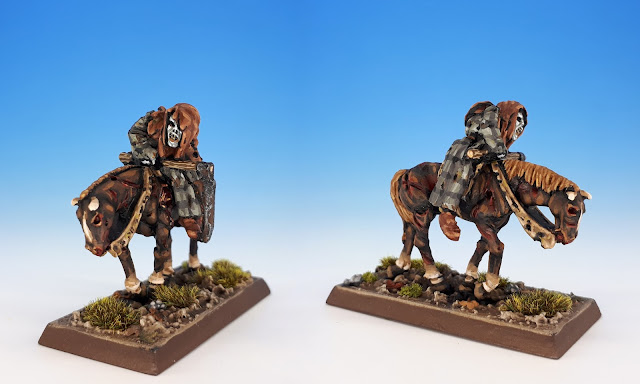 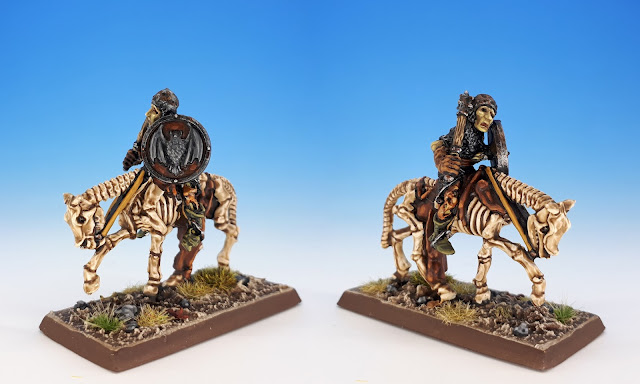 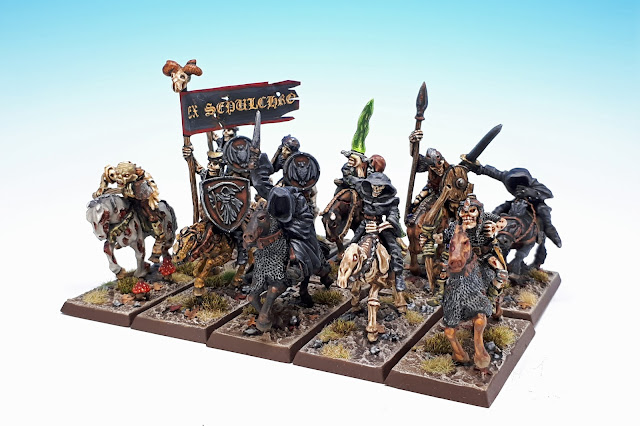 Posted by matthewjksullivan at 7:48 AM 16 comments:

Undead Cavalry for Vengeance of the Lichemaster part 1 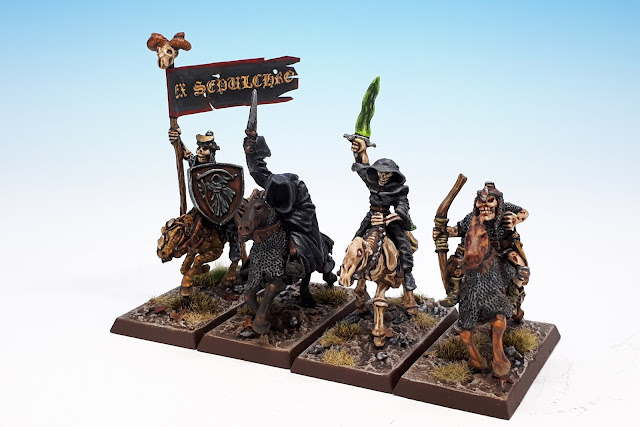 
There is, however, one important addition to Kemler's roster. It's not a unit or a hero, or even a new magic weapon. It is a spell. As the undead Lichemaster slays the hapless residents of the Frugelhorn Valley, he recuperates the vast magic powers that he once possessed as a living mage. Just in time for the Battle of La Maisontaal, he regains mastery of the spell Summon Undead. But what's more, there is a new modification to this spell. For the first time in 2nd Edition Warhammer Fantasy Battle, Summon Undead can be used to conjure up undead cavalry. This will let Kemler raise some much needed mobility for his army of slow moving zombies.

The Citadel Journal Spring 86, the same magazine that published Vengeance of the Lichemaster and the modification to Summon Undead, also introduced a new line of Undead Cavalry miniatures sculpted by Bob Naismith. HOW CONVENIENT!

Well, this week and next week, let's take a look at some of the miniatures I painted for the Lichemaster's stable of death riders... 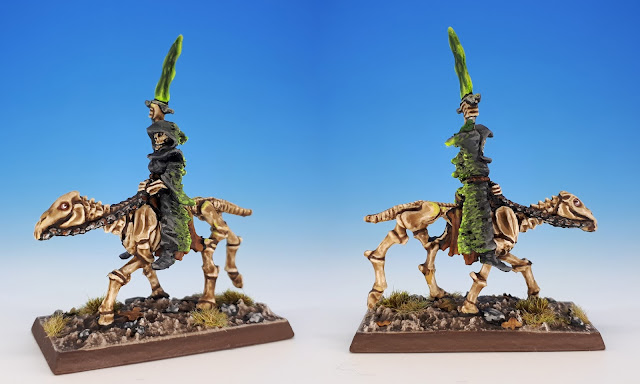 Above is "Goreprow" riding on "Bones" (C21 Undead Cavalry, Citadel, sculpted by Bob Naismith, 1986). He's the skeleton featured on the advert for Vengeance of the Lichemaster in the Citadel Spring Journal 86. This is just a great miniature. I love the way his robes seem to trail off into smoke or spectral ectoplasm. You can see that I tried to accentuate this effect with a judicious use of bright green paint. 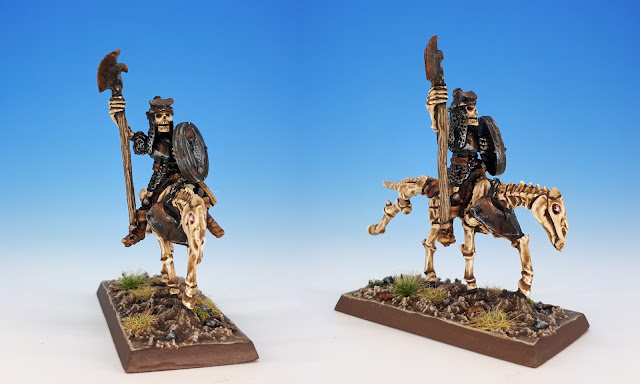 Next is "Doomsmile" (C21 Undead Cavalry, Citadel, sculpted by Bob Naismith, 1986). When the Lichemaster was handing out scary names to his henchmen, Doomsmile was near the back of the line. Like "Goreprow" he's riding an excellent skeletal horse. At the time, the slender nature of these steeds required some significant technical advances pioneered by Naismith (as detailed in the introduction to the C21 range). 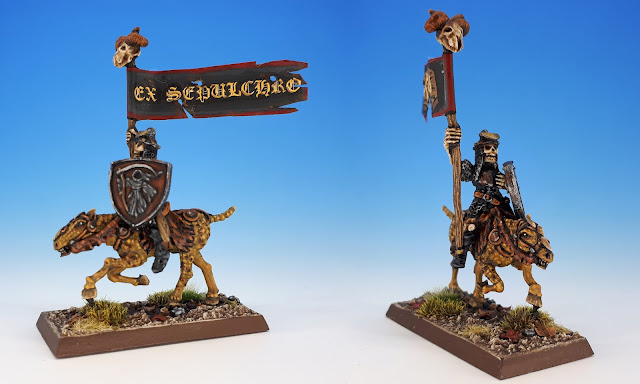 Here's my slightly converted version of "Doomsmile" (C21 Undead Cavalry, Citadel, sculpted by Bob Naismith, 1986) riding on the steed "Lizardskin". For those of you who care about these things, he's bearing a standard that reads "Out of the Tomb". 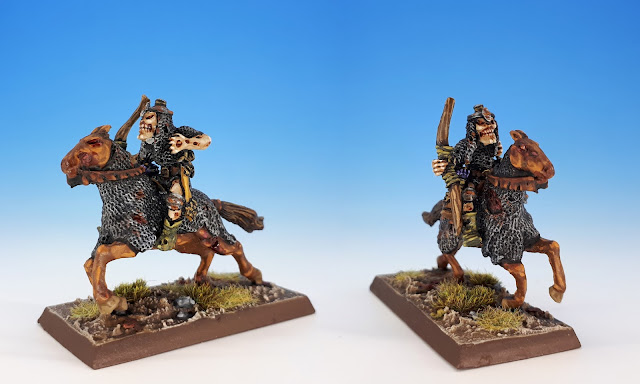 Above is "Death Dart" (C21 Undead Cavalry, Citadel, sculpted by Bob Naismith, 1986). I love the sense of movement in his horse. He really does seem to be darting forward. 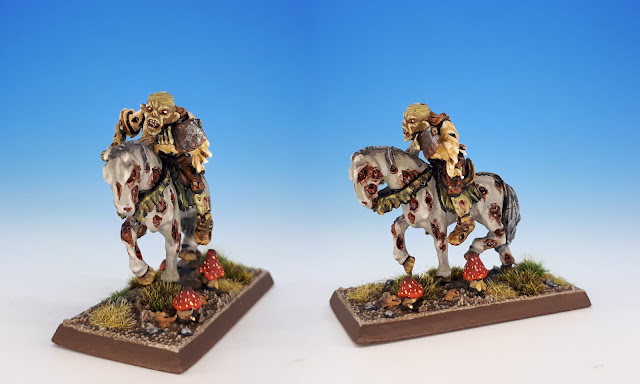 And finally, my favourite is "Deathheart" (C21 Undead Cavalry, Citadel, sculpted by Bob Naismith, 1986). For me this miniature really captures the essential creepiness of this range: the slouching, plodding determination of both horse and rider. I'm happy with the way that the horse's many wounds turned out - I feel like he was well picked over by the ravens before being raised up to bear Deathheart. 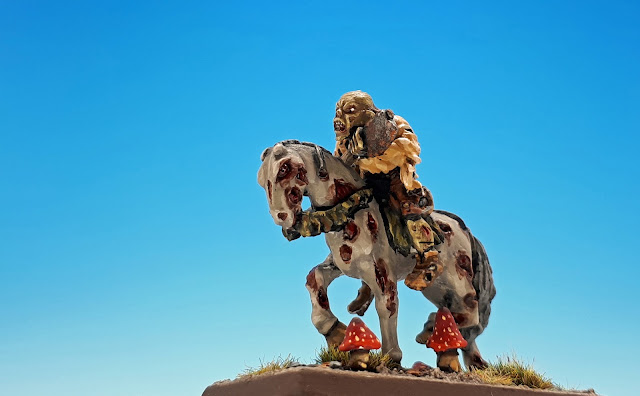 Thanks for looking. Next week we'll finish off Vengeance of the Lichemaster by looking at the last four skeleton cavalry in Kemler's force.


Posted by matthewjksullivan at 7:40 AM 25 comments:

Vengeance of the Lichemaster: the Skaven Warband 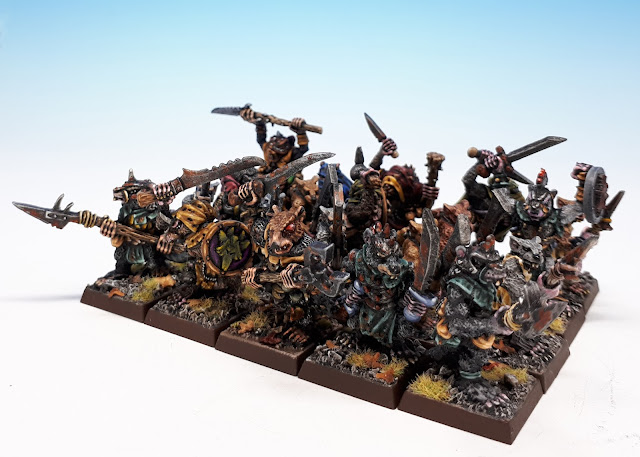 Behold the Skaven warband of the Grey Seer Gnawdoom, one of the principle antagonists in the classic Warhammer scenario Vengeance of the Lichemaster. Regular readers will know that I'm methodically (i.e. slowly) profiling all the Citadel miniatures needed to recreate this wonderful battle.

I painted most of these Skaven models years ago in order to populate my copy of Advanced Heroquest. As a result, I'm not sure I love all my work. Even now I'm niggled by the suspicion that I've never really "gotten" how to paint the chaos ratmen. I've bought used Skaven on eBay that were clearly painted in speed mode, with rapid and dramatic drybrushing -- and yet these fast and dirty versions seemed to capture more of the old-timey Skaven essence than my time-consuming and painstaking style. Oh well - sometimes you eat the bear and sometimes the bear eats you.

Well, without further ado, here they are: 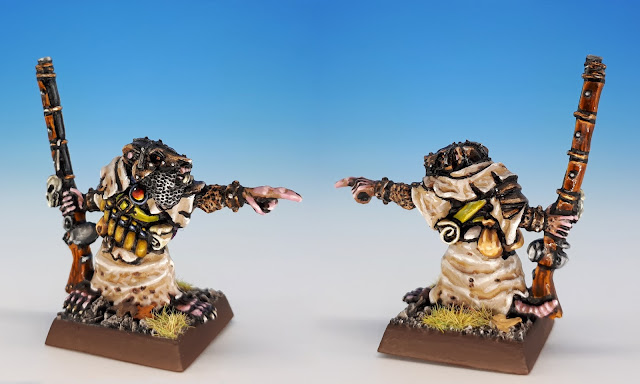 Above is "Skreth the Ironclad" (C47 Skaven, sculpted by Jes Goodwin, 1987). This is one of my all time favourite Skaven sculpts. I love his chainmail face-mask, and long, jezzail-style rifle. 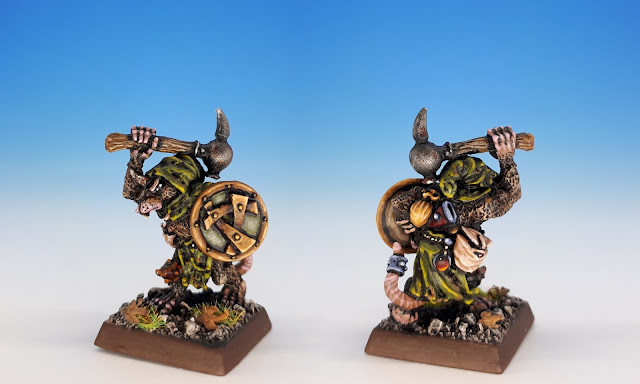 Here we have "Goar Headwrecker" (C47 Skaven, Jes Goodwin, 1986). Even though this is only a rank-and-file model, you can see all of Goodwin's talents on full display: a dynamic and almost geometrical pose, fascinating details and a general sense of ratty menace. 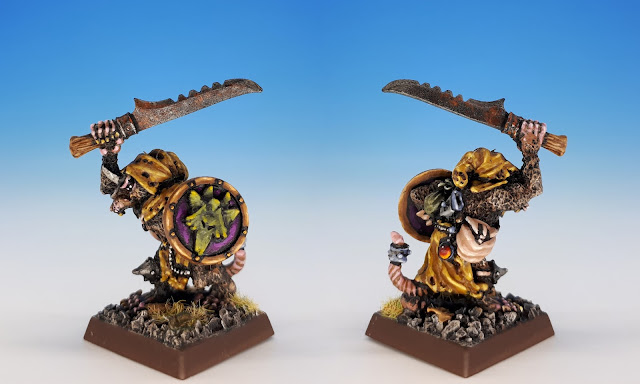 This is my simple conversion of "Goar Headwrecker" (C47 Skaven, Jes Goodwin, 1986), substituting a cleaver for the original's spiked mace. 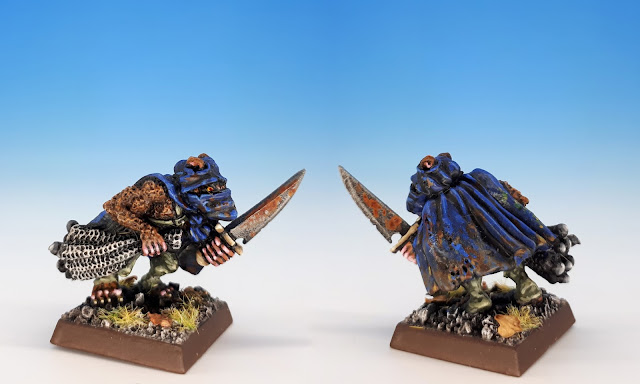 Above is one of the original gutter-runners, "Ashish the Black" (C47 Skaven, Jes Goodwin, 1986). His name is a not-so-veiled reference to the hashishi, the Islamic cult that gave us the word assassin. 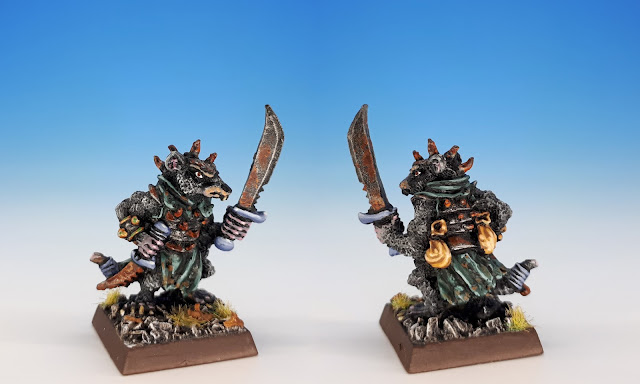 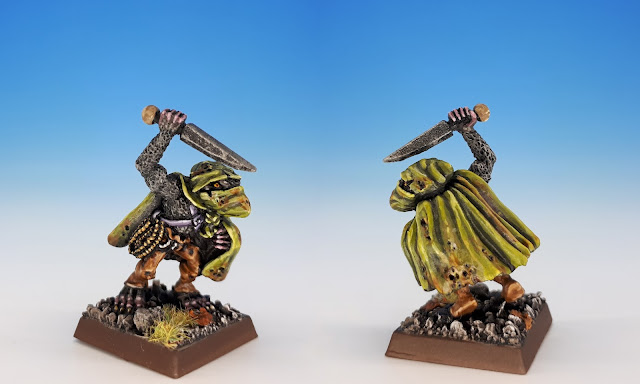 Another classic assassin is "Nightrunner" (C47 Skaven, Jes Goodwin, 1986). Again, I love how Goodwin composed these models. Their geometry seems to evoke a swastika or throwing star -- either way, it reflects the nasty and deadly nature of the Skaven. 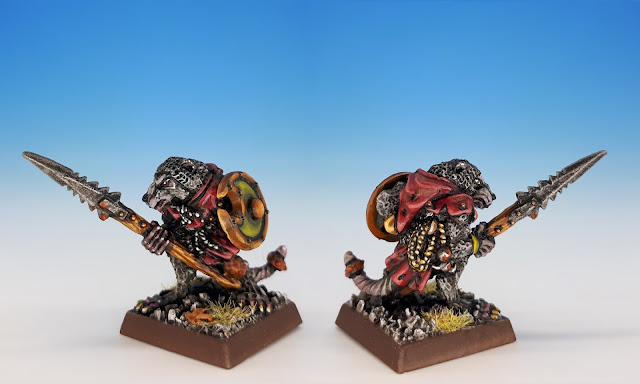 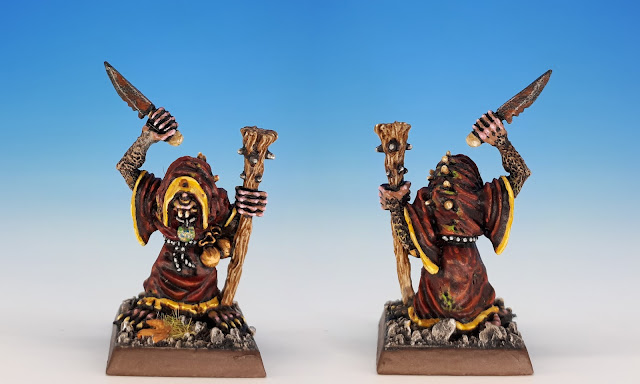 Finally, we have the original Plague Monk, "Spyne Blightmaster" (C47 Skaven, Jes Goodwin, 1986). This model is a superb distillation of Goodwin's creative powers. I just love the way the cowl covers his eyes (does he have eyes?), not to mention the strange spines growing from his back. Well, we already know the Skaven have some pretty unsavoury religious practices.

Here's another shot of the whole lot marching out for battle with the Warlord Throt the Unclean at their head. 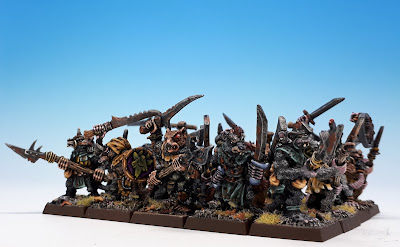 Thanks for looking! Next week we'll be turning to the undead cavalry of the Lichemaster Heinrich Kemmler.


Posted by matthewjksullivan at 8:54 AM 19 comments: