As I feared, Fantasy Flight Games is releasing miniatures at a glacial pace for Imperial Assault, their Star Wars skirmish game. I am not by nature a patient man  -  just ask Mrs. Oldenhammer in Toronto as the cocktail hour approaches. And so I've decided to take matters into my own hands and create some new miniatures of my own. 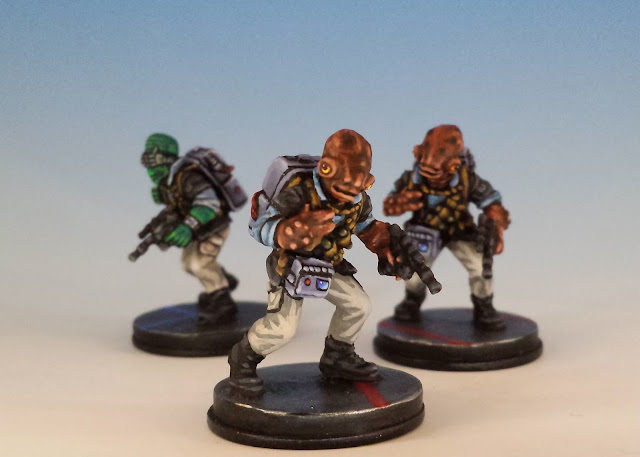 I'm not much of a sculptor, so this was an adventure for me. I started with a unit of two Rebel Saboteurs. I chose them because after a few weeks of competitive play, it's become clear that they are the best troops in the Rebel's roster. Screw the Force: if you're going to stop Darth Vader, you need the withering firepower of these commandoes. In fact, the only time I've seen Darth go down, it was because my opponent fielded 8 Rebel Saboteurs who swarmed the Sith Lord like a plague of locusts on the coasts of Egypt. So my plan is to use these conversions as the heart of my own Rebel strike-force.

Out of the box, the Rebel Saboteurs are bald Duros aliens. I decided to re-create them as Mon Calamari (the least felicitously named race in the Star Wars universe). Slicing the Duros heads off was the work of a moment. Then I replaced them with the heads of two Admiral Akbar figures from Wizards of the Coast's old Star Wars range (these soft plastic figurines sell for just a couple dollars each on eBay - they often go by the name WotC Star Wars. There are so many miniatures in the range that they provide a nearly endless source of conversions.)

Next, I wanted to replicate the distinctive hands (fins?) of the Mon Calamari. So I shaped a little Greenstuff into their swollen, rubbery fore-arms and garnished them with tiny polyps. Finally, I refashioned the Durosian hands into claws. Presto! A new miniature.

I painted the Mon Calamari with the same colour scheme as my other Rebel forces - a buff, blue and black uniform based on the troopers aboard the Tantive IV at the beginning of A New Hope. The Mon Calamari skin is Terracotta, highlighted with ruddy fleshtones and capped with some dark brown spots, like port-wine stains.

I've ordered a heap more Wizards of the Coast figurines, so I'm looking forward to more conversions in the future: Quarren, Aqualish and Ithorians... oh my! 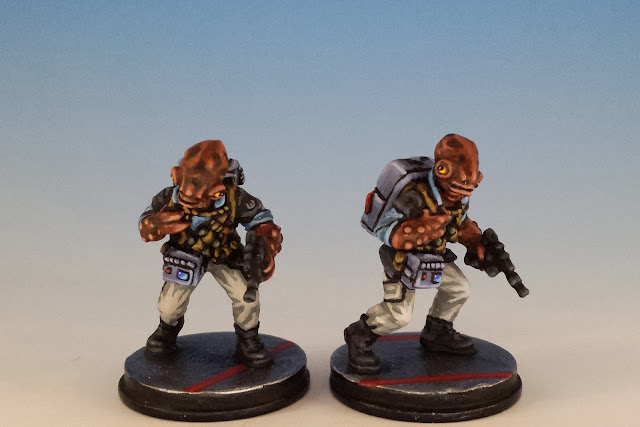 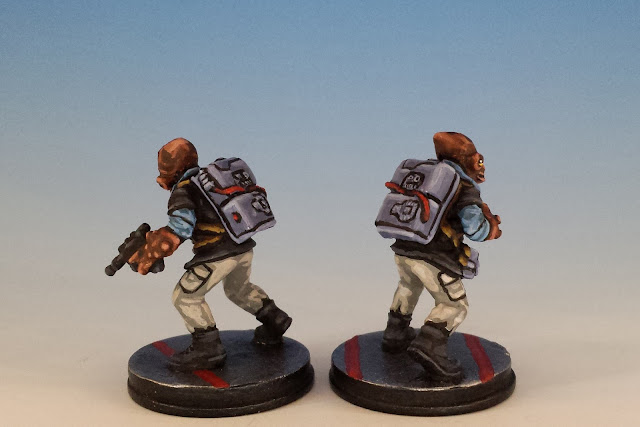 Thanks for looking! If you've made any Star Wars conversions of your own, please let me know in the comments and I'll happily update my post with the link!

Posted by matthewjksullivan at 8:28 PM