Reading along with the Lord of the Rings: A Short Cut to Mushrooms 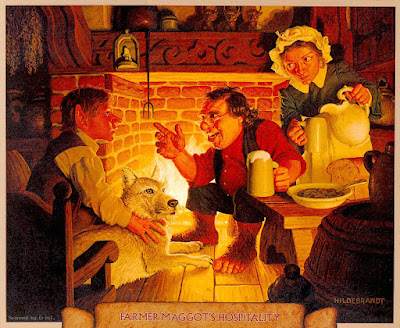 Chapter 4 of The Fellowship of the Ring

Delay is one of the great themes in The Lord of the Rings. The forces of good are constantly struggling against the consequences of their own procrastination. This idea first comes to the fore in A Short Cut to Mushrooms, as the hobbits race to avoid the Black Riders chasing them across the Shire. After 17 years of delay (in between Chapter 1 and 2), followed by months of further dithering by Gandalf and then Frodo (in Chapter 2 and 3), the hobbits now find they don't have a moment to spare:


When they had struggled to the bottom of the bank, they found a stream running down from the hills behind in a deeply dug bank with steep slippery sides overhung with brambles...
Sam Gamgee looked back. Through an opening in the trees he caught a glimpse of the top of the green bank from which they had climbed down.
‘Look!’ he said, clutching Frodo by the arm. They all looked, and on the edge high above them they saw against the sky a horse standing. Beside it stooped a black figure.

This breathless chase just highlights the foolishness and waste of Frodo's delay throughout the long summer. But he, of course, is not the only one: throughout the book, we will learn that Gondor, Rohan, the Elves and the Ents have all squandered much needed hours and opportunities. The fact that at least some of their peril was avoidable lends to the entire trilogy a sense of tragedy. Although I generally like to avoid overly historical interpretations of Tolkien, I can't help but think that the high cost of delay would be particularly vivid for anyone who lived through the 1930's, when Britain wasted many chances in the lead up and initial stages of World War II.

In any case, I think the theme of delay is a powerful one because it's something that everyone can identify with. Not all of us have been chased by Black Riders, but we've all experienced the awful feeling of rushing to catch up after fruitless procrastination. In other words, this theme is another way that Tolkien bridges the gap between his world of high fantasy and the reader.

There's another aspect of Chapter 4 that I have to comment on: the remarkable character of Farmer Maggot. Just as this chapter introduces the theme of delay, it also introduces a pattern about how the Fellowship will acquire allies -- allies starting with Farmer Maggot. Such allies first appear hostile or at least dangerous (Maggot, for example, used to "beat" a young Frodo Baggins) until they are won over with diplomacy and goodwill. Once befriended, of course, these allies prove invaluable, usually ushering the heroes through their territory and on to the next adventure.

Maggot is one of my favourite characters because Tolkien merely hints at his hidden depths, leaving much to the reader's imagination:

‘Old Maggot is a shrewd fellow,’ said Merry. ‘A lot goes on behind his round face that does not come out in his talk. I’ve heard that he used to go into the Old Forest at one time, and he has the reputation of knowing a good many strange things...’

The best illustration of Maggot's strength of will is the fact that he's the only character in The Lord of the Rings who carries on anything like an actual conversation with a Ringwraith. And not just conversation -- Maggot virtually sasses Sauron's agent of terror when it comes looking for Frodo. The passage (as narrated by Maggot himself) is so rich, I can't help but quote it at length:

‘‘Good-day to you!’’ I says, going out to him. ‘‘This lane don’t lead anywhere, and wherever you may be going, your quickest way will be back to the road.’’ ... The black fellow sat quite still.

‘ ‘‘I come from yonder,’’ he said, slow and stiff-like, pointing back west, over my fields, if you please. ‘‘Have you seen Baggins?’’ he asked in a queer voice, and bent down towards me. I could not see any face, for his hood fell down so low; and I felt a sort of shiver down my back. But I did not see why he should come riding over my land so bold.

‘He gave a sort of hiss. It might have been laughing, and it might not. Then he spurred his great horse right at me, and I jumped out of the way only just in time. I called the dogs, but he swung off, and rode through the gate and up the lane towards the causeway like a bolt of thunder. What do you think of that?’

Well, I think pretty highly of it myself, Farmer Maggot. It sounds like you might be the bravest character in the whole trilogy.

Posted by matthewjksullivan at 7:45 PM