The Battle of Wretched Heathen Peoples - a Saga Battle Report

Welcome to another battle report for Saga, once again pitting a Viking warband against the zombies from the limited-edition Revenants expansion. My friend Lawrence took command of the Vikings and Matthew O. resumed control of the Revenants, while I officiated as game master, photographer and colour-commentator ("And that's a bad miss.") 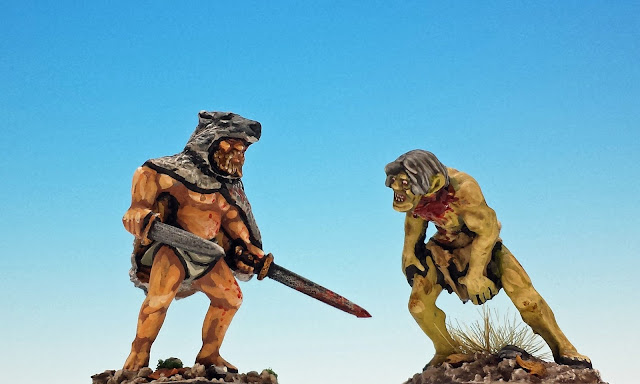 We happened to play our game on Easter Sunday, so I designed an ecclesiastically-themed scenario named "The Battle of Wretched Heathen People". The title comes from a famous passage in the Anglo-Saxon Chronicle:


“In this year fierce, foreboding omens came over the land of the Northumbrians... there were excessive whirlwinds, lightning, and fiery dragons were seen flying in the sky. These signs were followed by great famine, and a little after those, that same year on 6th Ides of January, the ravaging of wretched heathen people destroyed God’s church at Lindisfarne.” (793 c.e.)

In this skirmish, the two warbands show up to pillage an isolated British monastery at the same time. Awkward! As usual, the players get victory points for killing warriors from the other team, but they also earn points for hunting down the monks, with extra points points for despoiling the chapel or slaying the Vicar. As the scenario begins, most of the poor monks are hiding in a wheat-field, but the Vicar has stationed himself by his church, and he is prepared to deliver a stern sermon to the first person who tries to start any funny business.


Below is our gaming table, with the Church on the west side of the stream, and two wheat-fields (with a set of cowering monks in each field) on the east side. The Vikings entered from the north and the Revenants shambled up from the south 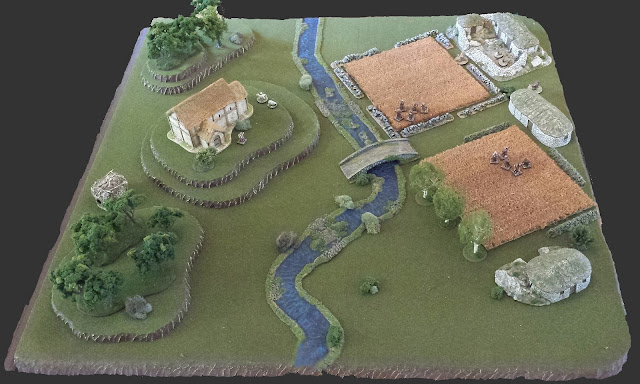 The Revenants took initiative and occupied the centre of the board in a seething line. The Necromancer stood in the very middle, ready to cross over to either side of the stream as need should require.


The Vikings, on the other hand, chose to refuse their right flank. They occupied the east bank in force, with the Berserkers ready to lead the charge. 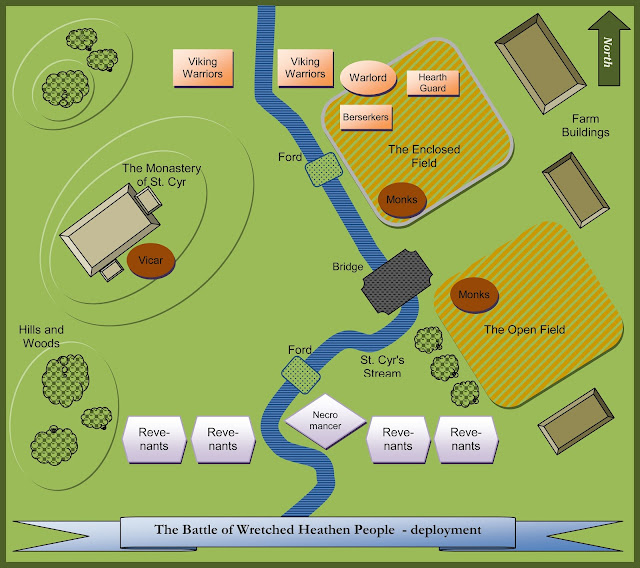 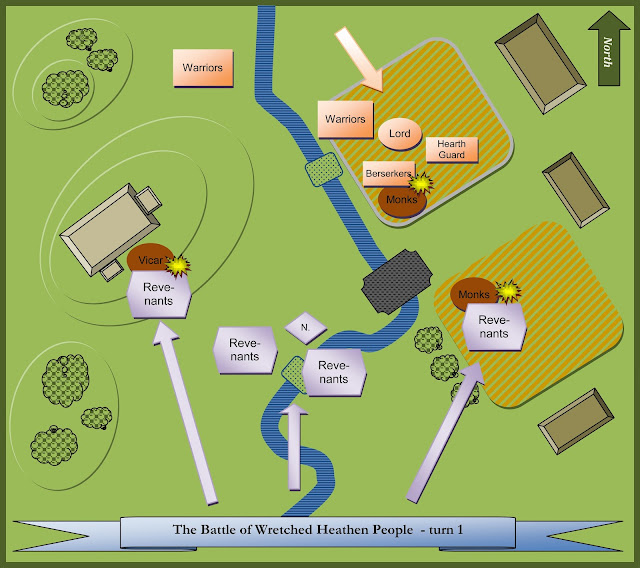 The Revenants rolled poorly with their Saga dice, but the Necromancer was still able to invoke "Winged Death" in order to transmute the normally slow hordes on his flanks into swift, sprinting zombies. These undead swooped down upon the Vicar and one group of monks, slaying everyone but one bewildered monk who would, miraculously, survive into Turn 3.

Meanwhile, the main body of Vikings on the east bank charged forward. The vanguard of Berserkers fell upon the last group of friars and massacred them all, although they lost one of their own men in the melee. 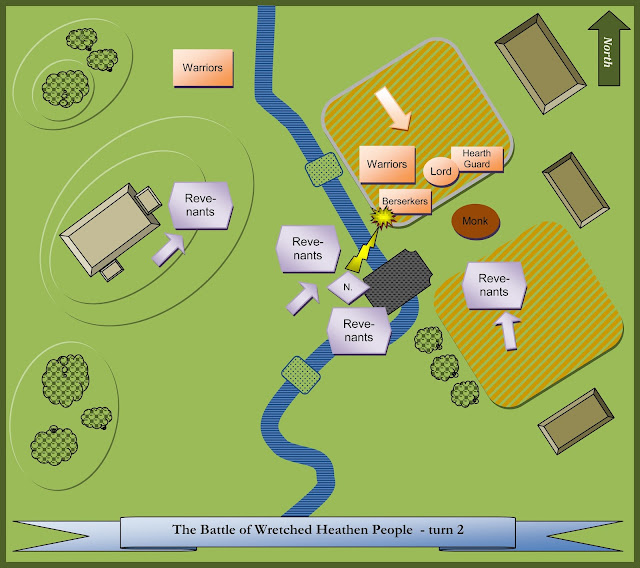 One of my favourite aspects of the Revenants is the fact that their player loses control of them if they are too far away from the Necromancer. When that happens (or any time the Revenant player doesn't give orders to one of his units), the feral zombies get a free move at the very end of the turn -- but all they can do for this free turn is slowly shuffle toward the nearest living thing. It gives the Revenants an unpredictable and brainless quality. And so, in turn 2, the Necromancer had hoped to get his west-most pack of zombies to despoil the unguarded church, but they were too far away to obey his commands. Similarly, the east-most zombies went out of control and just crept towards the last remaining monk without actually eating him.

But not all was a loss for the Necromancer. With two units of zombies to back him up, he approached the strategically vital bridge in the centre of the table. What's more, he loosed a magic lightening bolt and killed a Berserker at the edge of the field.


On their turn, the Vikings formed up their line of battle so that they would be ready to gank the zombies en masse next turn. As they moved, they were hit with one of the Revenant's least appealing Saga abilities -- "bowel loosening terror" -- which feeds the Necromancer "dread tokens". Notwithstanding the gastroenterological stress, the Northmen maintained discipline and held a number of their own Saga abilities in reserve. 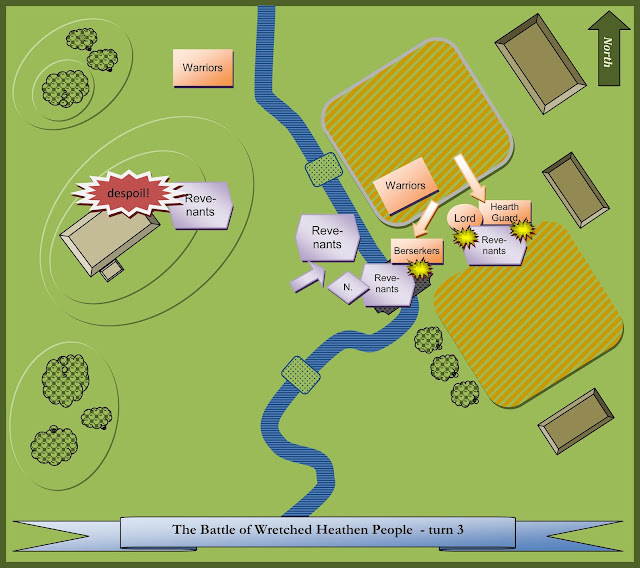 The Necromancer was now close enough to order the Revenants in the west to plunder the church, paying Matthew a rich dividend of victory points. More points came when the zombies in the wheat finally bagged the last monk. The Necromancer also tried to summon another lightening bolt attack, but the Vikings invoked their Saga ability "Odin", thus foiling the missile attack. If you're going to kill a Viking, you better get up close to do it!

Get close the Revenants did. One pack of Revenants clambered onto the bridge, while their neighboring unit, being left without orders, began trudging mindlessly into the river in order to get at the nearby Vikings across the bank. As things would turn out, this unit would spend the rest of the game mired in this stream.

The Vikings saw their chance, and pounced! The two remaining Berserkers charged up the bridge, attacking furiously but not well. They destroyed three zombies but were themselves overwhelmed by the tide on undead flesh. Undaunted, the Viking Warlord Gaukur leaped over a stone fence and led his elite Hearthguard against the east-most Zombies, who were busy feasting on the last of the monks. Gaukur's assault was devastating, and nearly wiped out the entire unit. 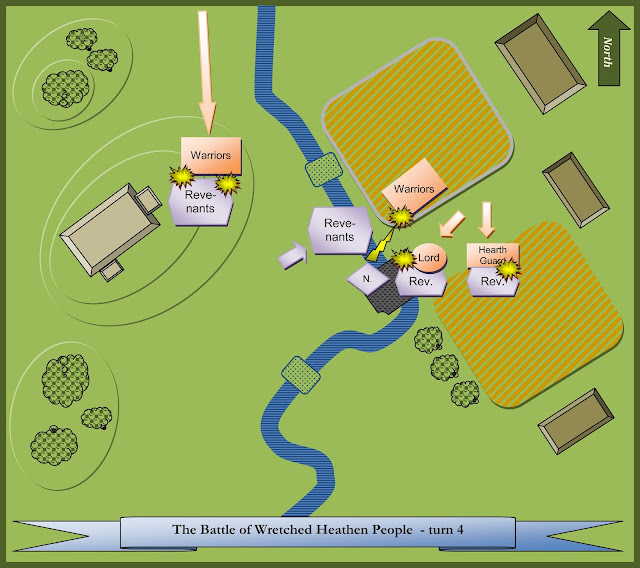 Seeing his numbers growing weak, the Necromancer used the best rolls of his Saga dice to invoke the power "Why Won't They Die?". This allows him to raise new zombies to replenish his fallen. When you add this to the fact that killing zombies doesn't yield a lot of victory points (1 point for every 3 zombies killed), it makes battling the Revenants a demoralizing experience.

With his few remaining dice, the Necromancer harassed the Vikings with lightening bolts. Left without orders, the two zombie units in the centre of the table crept forward. This just further mired the unit in the river -- they were now to far in the difficult terrain of the river to leave easily, but not far enough to be able to cross it quickly either.


On their turn, the Vikings pressed their attack. The two surviving Hearthguard wiped out the depleted east-most zombies, while the Warlord Gaukur bravely held the bridge against the undead horde. But most surprisingly, the unit of Viking Warriors on the western flank finally moved out and attacked the zombies who had been despoiling the church. This attack was a splendid success, driving the zombies back with few Viking casualties.

At this point, the game seemed to hang in the balance. The Revenants had a substantial lead in points, mainly because they killed the Vicar and looted the church. But all the momentum lay with the Vikings -- could the Northmen catch up?

Turn 5 - The Quick and the Dead 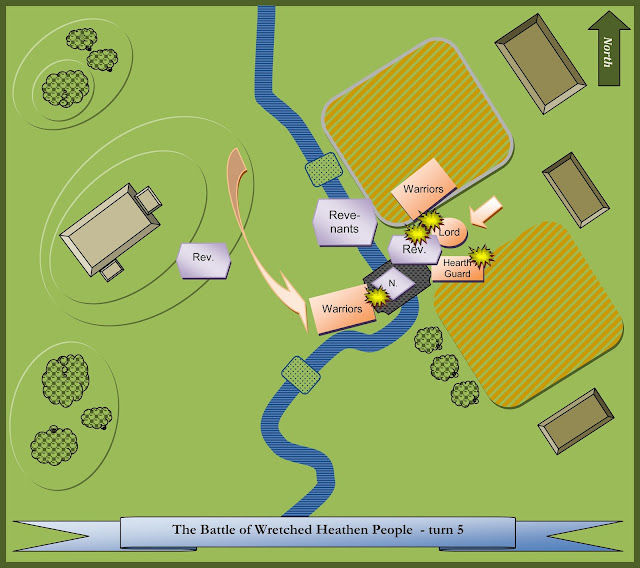 The Revenants rolled well with their Saga dice, allowing them to use some potent abilities like "dead flesh" (which toughens the zombies in battle). On the bridge, the undead boiled forward in a devastating attack that nearly killed the Warlord (were it not for the two remaining Hearthguard who sacrificed themselves to protect him). But by the chapel, the depleted unit of zombies again faltered in the melee and were repulsed with great losses.

Sadly for the Necromancer, his most intact unit of zombies was still stuck half-way though the river.

At this crucial juncture, the Viking player made a surprising and bold gambit. Seeing that the Necromancer had no one covering his rear, he marched his warriors at double-time from the church and ambushed the old wizard from behind! This is one of those daring tactical maneuvers that Saga (more than any other war-game I know) permits and encourages.

The Warriors rolled well and then used the "Thor" Saga ability to prolong the assault. Attacking the Necromancer three times (!), they scored some telling hits... but the Necromancer shrugged off one and all by spending his deep reserve of "dread tokens". He had earned all this dread by constantly afflicting the Vikings with "bowel loosening terror", and now all those loose bowels were biting the Northmen in the ass (count the puns).

In return, the wizard killed two of his attackers. Thus the dramatic ambush did not quite pan out for the Vikings, but it succeeded in pinning the Necromancer on the bridge, and set the stage for a climactic struggle.

Turns 6 and 7 - The Mighty are Fallen 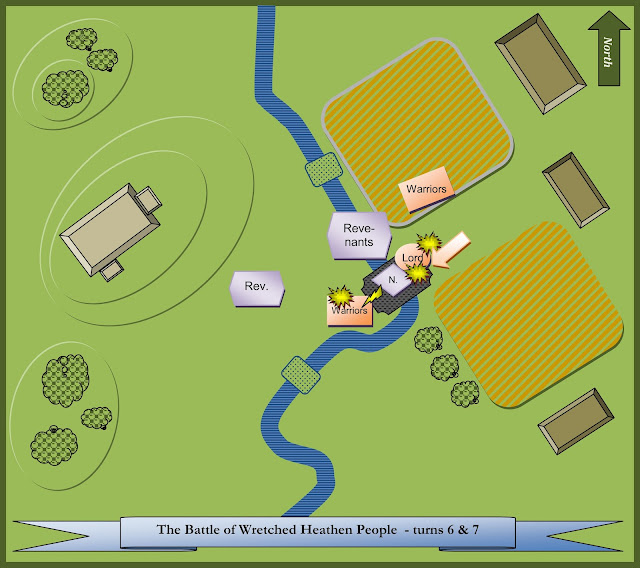 The Vikings may have brought the Necromancer to bay, but they had not managed to finish him. The Necromancer made them pay for this failure by lashing out with all his evil magic. In a series of devastating attacks he incinerated all but two of the Warriors who ambushed him on the bridge.


And now the moment of truth! In retaliation, the Viking Warlord charges up the bridge, hacking right through the defending band of zombies and engaging the Necromancer himself. A desperate struggle ensues on the summit of the bridge. The Viking Warlord invokes "Thor" and "Uller" to stiffen his attacks, while the Necromancer scratches back like a cornered rat. To everyone's surprise, the dice repeatedly fail the Warlord so that attack after attack leaves the Necromancer untouched.

Then the seemingly feeble wizard uses his Saga ability "Unholy Vim" to bring steel into his own attacks. With one lucky blow, he fells the isolated Warlord. The mighty Gaukur falls! Game over.

What a great game! Once again Saga delivered drama, surprising reversals of fortune and a genuine climax. Even better, both Matthew O. and Lawrence played with great skill and sportsmanship.

As usual with him, Matthew O. was smart about going full-bore for the victory conditions (the Vicar and the chapel) right from the beginning. This gave him an early edge in victory points that forced Lawrence and his Vikings to take more risks in order to catch up.

The move of the game was Lawrence's unexpected ambush at the rear of the Necromancer. I certainly did not see it coming, although, like all great tactical moves, it seems obvious in retrospect. It required pushing his Vikings to the very limit, but I love that Saga allows for that sort of maneuver. Lawrence was also smart about saving his Saga dice to make the ambush especially withering. But he discovered what so many other Saga players have learned at their cost: killing the leader of a warband requires skill and a lot of luck. 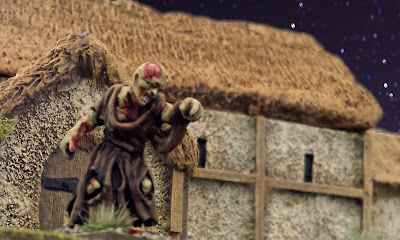 Now there are some new monks in residence at the monastery.

Posted by matthewjksullivan at 5:08 AM