Any student of history knows that mercenaries were an indispensable part of life in the ancient world. We see them in every force from Carthage's elite infantry to William the Conqueror's Flemish allies. Speaking of the Flemish... There's a marvelous legend that when Duke Baldwin of Flanders asked what compensation he could expect for helping William's invasion of England, William handed him a blank sheet of parchment. This seems to be the first example of payment by a blank cheque. 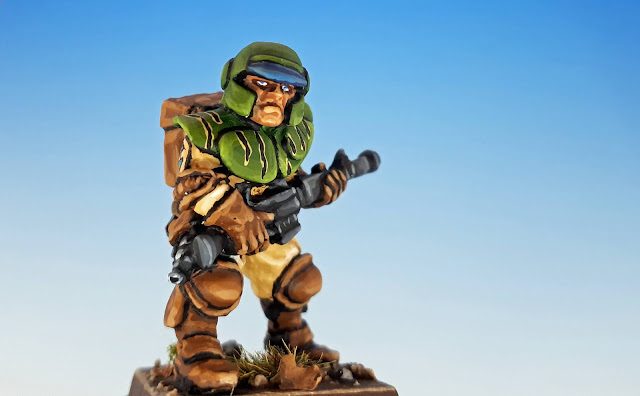 If not always completely reliable, ancient mercenaries were at least esteemed as necessary professionals. But after the modern nation state began to emerge out of the mercenary-infested wreckage of the Thirty Years War, renting soldiers fell out of fashion. In the late 20th century, mercenaries attracted a downright dishonorable reputation because of their role in vile bush wars and civil conflicts. If anything, the corporatization of mercenary work in the modern Middle East has only sunk their standing further.

The Rogue Trader minis that I've been profiling in my last couple posts reflect the idea of mercenaries that was current in the 1980's: these are decommissioned army men looking for a buck or poorly-organized irregulars. More like the Crippled Eagles of Rhodesia than Blackwater's shiny private army in Iraq.

Well, let's have at 'em. First up is "World Burner." I have always been a little entranced by this figure. He's armed only with an auto-pistol and a gas mask -- and yet his faceless glare (and sinister name) make him seem like a terrifying opponent: 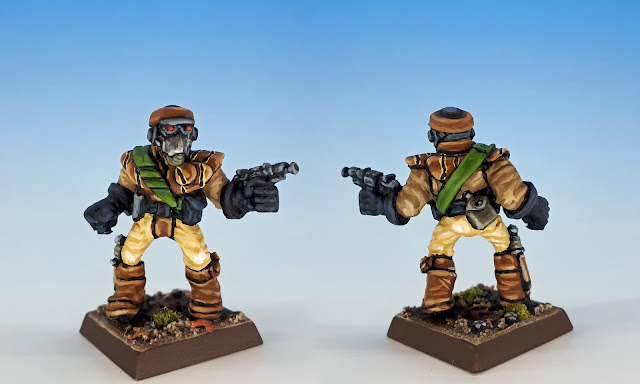 Next is "Break Out Con." I feel like if I were an escaped convict, I wouldn't advertise that fact by making it a nickname. But then, of course, I don't have a fully loaded bolter. When you've got a bolter, they call you anything you want. 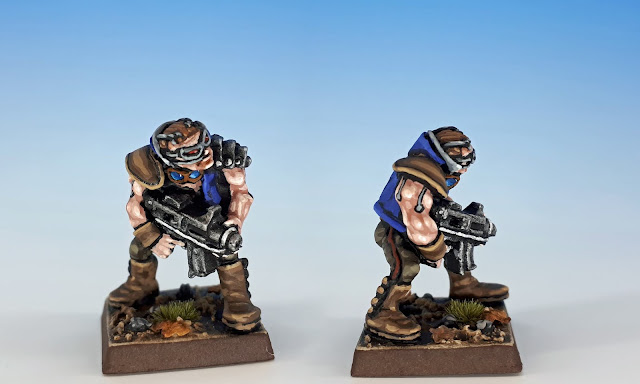 Here is "Hacker Harris." He and Break Out Con are a classic example of the Citadel Design Studio's modular technique, where the same basic sculpt is reconfigured to create two or more miniatures. First and foremost, this was a way of producing more miniatures in a shorter period of time, and it helps explain the Studio's ability to crank out so many different miniatures in such a short period of time (that and the drugs). But the modular technique has other benefits. It implants a pleasing sense of pattern in Citadel's miniature ranges. 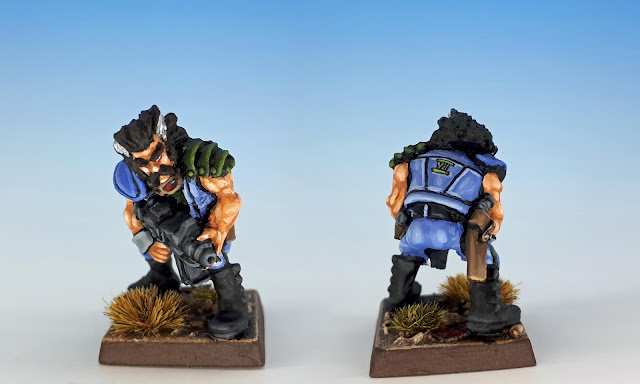 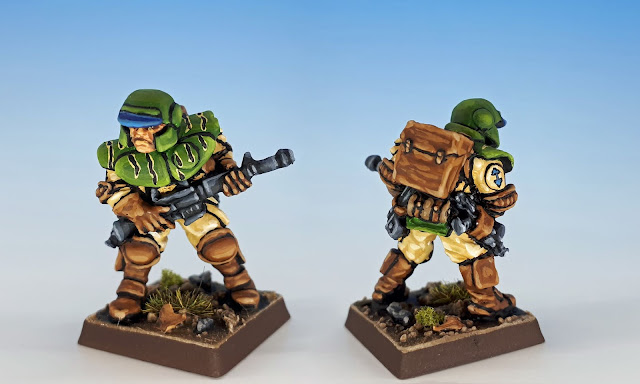 Fast-Star John appears to be a modular variation of World Burner. Both seem to be wearing a modified (and dyed) set of traditional Imperial Guard flak armour. Hence the sense that these fellows are decommissioned veterans or perhaps deserts. He also seems to be carrying an M16. Just the thing you want for your Bush War... in space.

Posted by matthewjksullivan at 7:27 AM