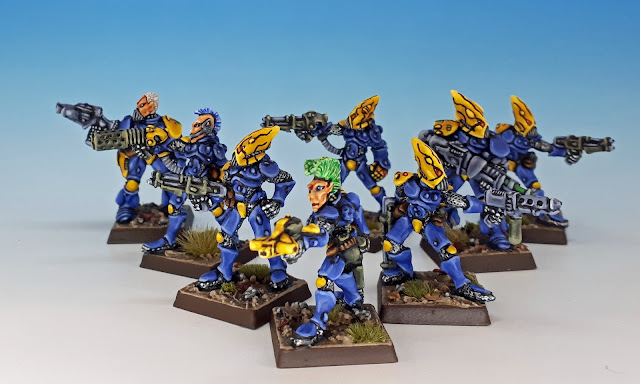 The first Eldar miniatures were sculpted by Jes Goodwin and released by Citadel in September 1987. There were twelve models in the range, which was labeled RTO4 Space Elves and later renumbered to RT401.They're an astounding achievement of design: The peaked helms, the organic lines and the heavy armament! In one fell swoop, they made "space elves" an instantly recognizable race while also highlighting the newness and strangeness of their values.
The genius of WH40K Rogue Trader was that it accomplished two different things at the same time. On the one hand, it shamelessly borrowed concepts, tropes, characters and conflicts from pre-existing settings. All these stolen goods gave Rogue Trader a welcoming familiarity. We recognized parts of Star Wars (armoured space troopers, a frail and psychic emperor, laser swords) or Dune (navigators, personal shields, assassins). We especially recognized the main races, because they were lifted en masse from Tolkien.
But on the other hand, Rogue Trader did a wonderful job of defamiliarizing the borrowed elements by giving them a twist. And nowhere was this twist more potent than with the Space Elves.

The Space Elves of the Rogue Trader universe were not the benevolent nature-lovers of The Lord of the Rings. Rather, they straddle good and evil. Their capacity for malice didn't fracture them into two different races (like the High Elves and the Dark Elves of Warhammer Fantasy). In this sense, the original Eldar resemble humans: both races are capable of moral ambiguity. Unlike humans, they seem to be motivated by boredom more than greed. As the Rogue Trader rulebook tells us, the Eldar trade, adventure, and fight "simply as entertainment":

For many Eldar the peaceful, idyllic monotony of the craft-worlds becomes so dull and uninspiring that they are driven to associate with other, younger and more hot-blooded races. Aside from the traders and merchants, there are some Eldar who throw themselves wholeheartedly into alien society, becoming adventurers or mercenaries... The most famous, or rather infamous, mercenaries are composed of renegades from Eldar society; the psychotic, the malcontent, murderous or evil...

Both the Rogue Trader rulebook and the Book of the Astronomicon (1988) make it clear that most of the Space Elves appearing on the gaming table are either pirates, raiders, or mercenaries. These are not the guardians of craft-worlds, but a wild bunch of killers.

Well, enough talk - let's look at the miniatures! Here are the first four from the RTO4 range of Space Elves...

First is "Aedui Starborn". A simple, classic design. An early sign that Space Elves are badasses is that he (and many of his colleagues) are armed to the teeth with two guns. The crossbow design in the shuriken catapult recalls the Eldar's origins in fantasy settings. 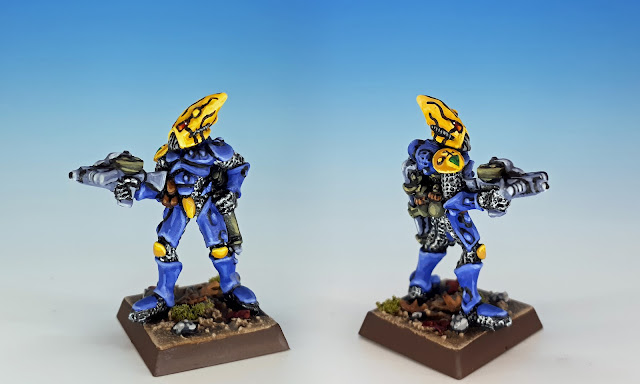 Second we have "Belgae Strongwill". Why bring a rifle when you can carry a vehicular laser cannon? 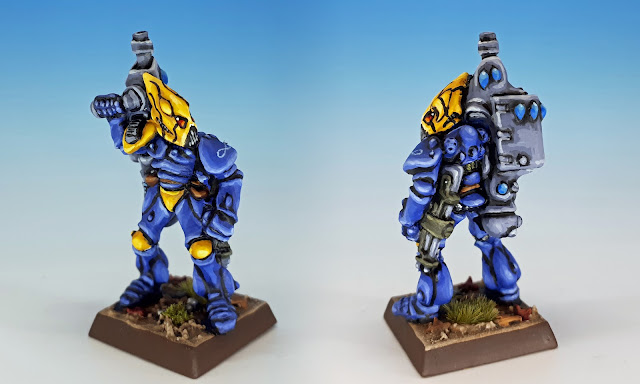 "Gaedhil Quickshadow" is next. If you can tell me what weapon he (or she?) is carrying in the left hand, please leave a comment. I see that weapon all over the place in early Rogue Trader minis, but I've never been sure whether it is a shotgun or a lasgun. 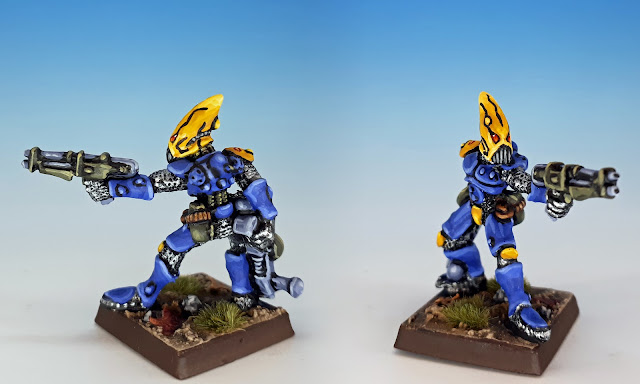 And finally, here is "Sgt. Mael Nightwing". I am particularly fond of this miniature because of the strange way that the casing for the weapon blends into his (or her?) gauntlet. It's a subtle touch that you see in a lot of these early Eldar sculpts: a melding of implements into armour. 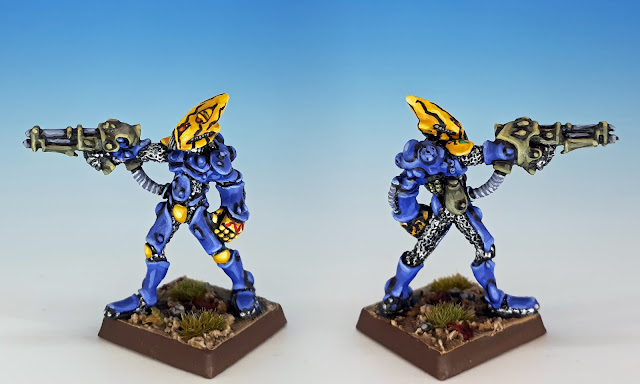 Stay tuned for more of the original Eldar next week!