Back in my day, we didn't have "Aeldari" or "Asuryani" or even "Eldar". Hear that? Not even Eldar. We had SPACE ELVES. And that was good enough for us. Just plain old Space Elves. We didn't need fancypants names stolen from the glossary in the Silmarillion. That's because we had guts. We got by with nothing but Elves. In space. With shuriken catapults. 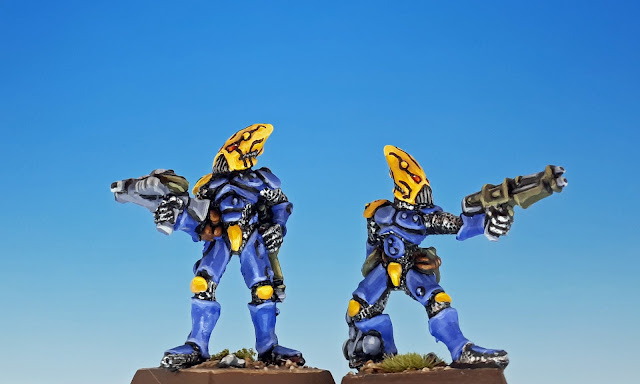 There were no good elves and bad elves. There were just elves. Sometimes they helped you and sometimes they raided your homeworld and incinerated your family. But we didn't bellyache about it or go around calling them "Drukhari" or nuthin'. What a bunch of lightweights you guys are. When a bee stings you on your knuckle, is it a Dark Bee? Was it seduced by Slannesh? Yeah - that's what I thought. Go make a Tic Tac video about it. 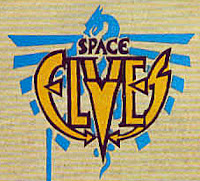 And for Chrissakes, don't call them "Guardians". Our Space Elves didn't guard shit. They were mercenaries. Or pirates. Or bounty hunters. If you want a guardian, read the newspaper and stop bothering me.

So now you understand. In the good old days, we didn't have rap music. We had precisely one record, and it wasn't even a record. It was a 7" flexi disc of Sabbat playing Blood for the Blood God. We'd play it over and over again while talking about how AWESOME the SPACE ELVES were and how they'd certainly kick the ass of every other army in the 40K universe if only their stats were better.

This is the second installment of my tour through the original RTO4 range of twelve Eldar, er, Space Elves. Our first miniature is "Alesia Wildfire". Like many of these Space Elves, he or she is pleasantly gender non-specific (and armed to the teeth). 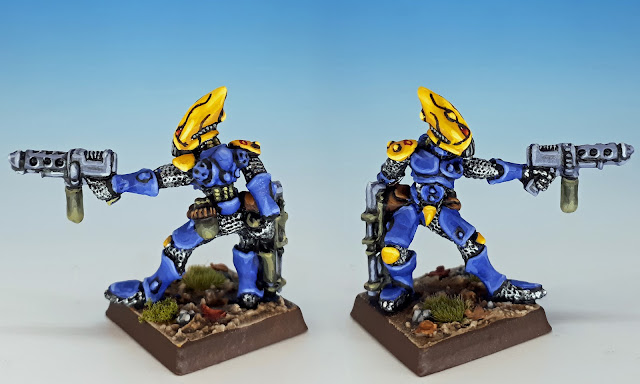 Next is "Cmmr. Inghen Keentongue". It's not clear what "Cmmr." is abbreviating. Commander? Commodore? Centimeter Mister? 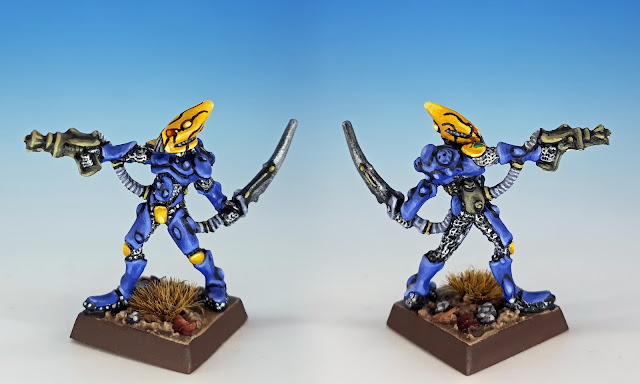 Third we have "Caetra Darkflight", who demonstrates the correct way to shoot from the hip. Knowledgeable readers informed me in the comments on last week's post that Caetra is carrying a laspistol (at least according to the Citadel Miniatures Blue Catalogue). I don't know about you, but that seems pretty big for a laspistol.

Our last miniature today is "Irbic Trueshot". This is a lovely sculpt that showcases the organic lines of the original Eldar. I mean Space Elves. 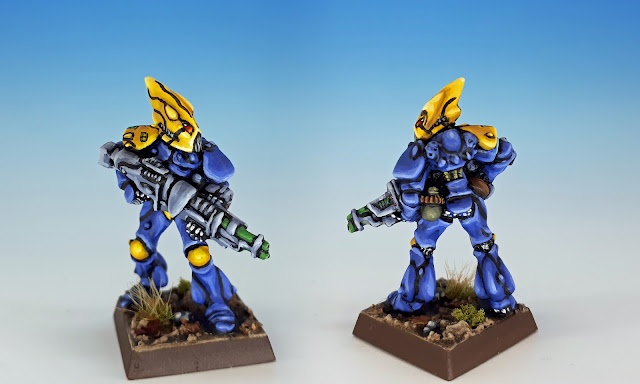 Thanks for dropping by - next week, we'll finish off the RTO4 range!

Posted by matthewjksullivan at 5:51 AM