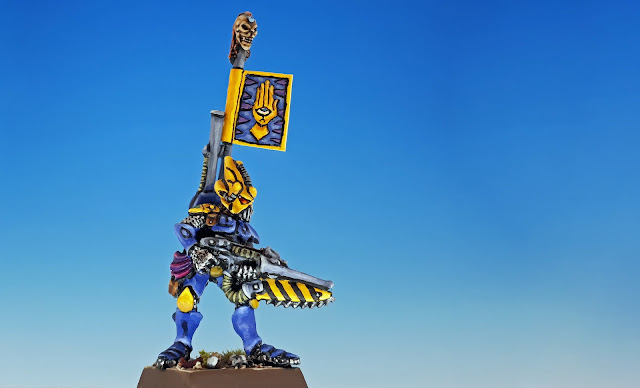 If there is anything that's cooler than the original RT401 Space Elves released in 1987, it was the RT402 Eldar Command Group released in 1988. With these figures, we see sculptor Jes Goodwin starting with the basic theme of the Eldar warrior, and embellishing it with free-jazz experimentation. The peaked helmets morph into masks or burst into tentacle-like tubing, the weapons grow teeth or elongate, and the armor mimics the shapes of Space Marines. It is a tour-de-force.

It's amusing to look back on these miniatures and to remember that, back in the 1980's, the whole "Space Elf" business was seen as a bit of a boondoggle. As Jes Goodwin recounted in a fascinating interview with Gav Thorpe in 2017:

"...I had been allocated to the space elf range because I was ‘new boy’ and nobody thought they would sell as well as space soldiers or space dwarves. As the resident elf nut I jumped at the chance to prove we could do something cool with them."

Well, I think we can safely say that the story ends well for the sculptor and his work. Over 30 years later, the Eldar continue to be one of the most aesthetically and mythologically interesting aspects of the 40K universe, (notwithstanding what some crusty grognards might say). And Jes Goodwin is the Lead Miniature Designer at Games Workshop, one of the few personnel remaining from the glory days of the 1980's.

I curbed my customary inclination to collect every miniature in this range because -- well, how many standard bearers and musicians does one squad of Space Elves really need? I painted them in the classic scheme of blue and yellow. Their insignia marks them as members of the Scarlett Command, a small band of Eldar Corsairs.

First up is the leader of my force "Cdr. Avele Swifteye". He (or she?) is wearing a helmet overlaid with scowling visage, an apparent homage to the mask (or men-yoroi) that samurai wore in order to protect their face and scare their enemies. Avele's mask and crest seems to mark him (or her?) out as an aristocratic warrior. 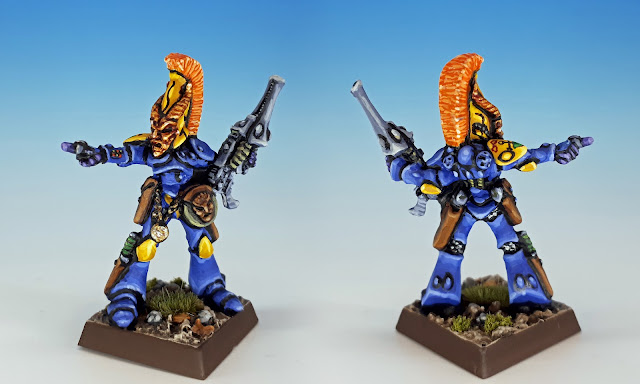 Next we have the champion, "Kaevii Firehand". I find this miniature interesting because it seems to betray influences from Space Marine armour, specifically in the exaggerated shoulder pauldrons and the flaring greaves with deep wells for the feet. The haircut is deep 1980's. 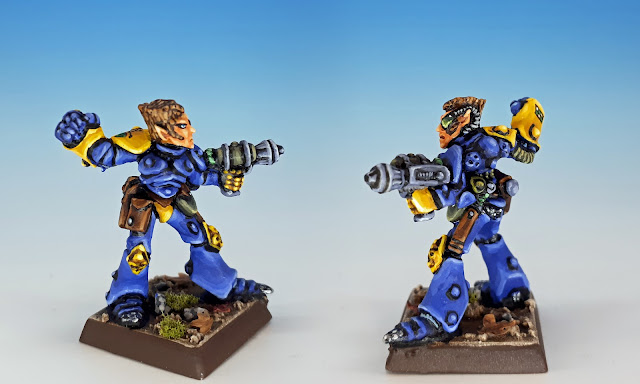 Third is the musician, "Kaele Lightprow". Nothing marks a Rogue Trader era unit out like having a musician. He is playing keyboards which are integrated into his thigh-armour and which activate the organ pipes on his backpack. Shine on, you crazy diamond! 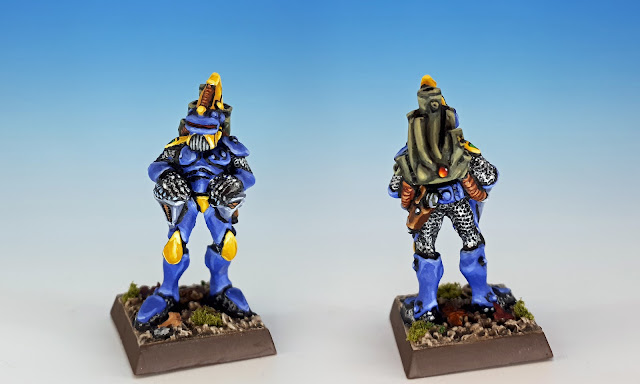 Last and certainly not least is the standard bearer, "Menhe Worldsong". This is probably my favourite miniature in the Space Elf range, and one of my top picks of all time. He looks to me like the meanest Eldar who ever donned a big pointy helmet. 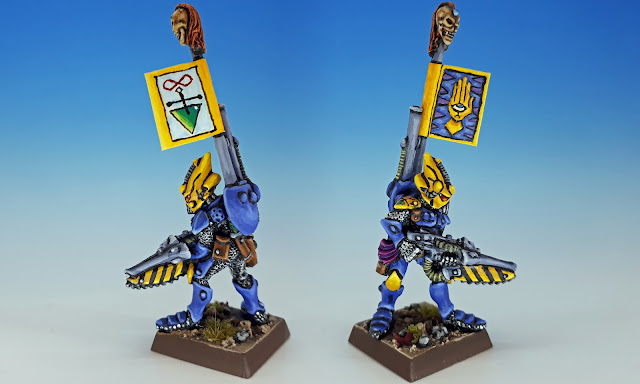 WAIT! That should be the end, but I painted two bonus command figures: a spotter and a special weapon trooper.

The spotter is from the RT404 Eldar Field Artillery range released in April 1988. 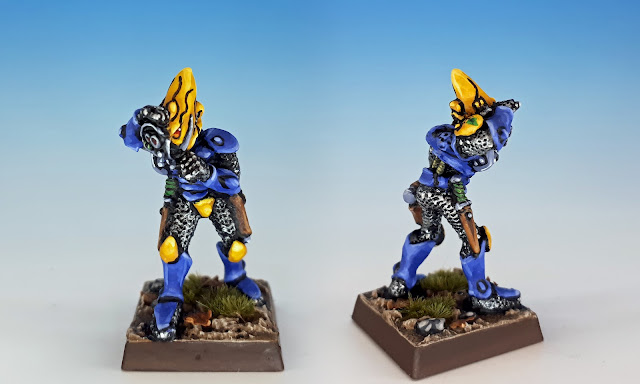 And finally, my special weapon trooper is "Velasinn Doomdrifter" from the RT402 Command Group. 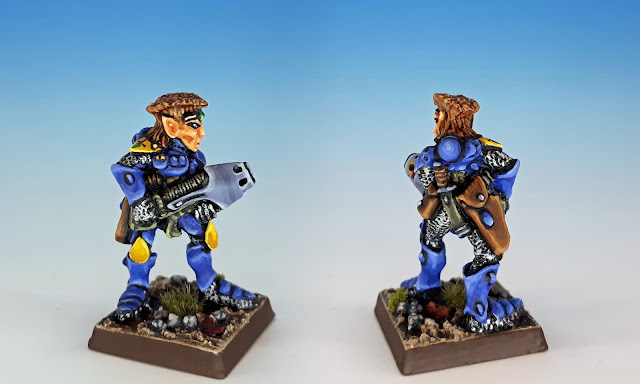 Well, that's it for my Eldar project. I hope you enjoyed it as much as I enjoyed sharing it. Take care! 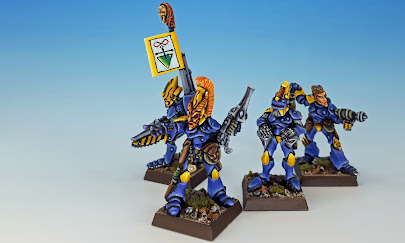 Posted by matthewjksullivan at 5:27 AM